VIDEOS OF THE WEEK: THE BOOMTOWN RATS 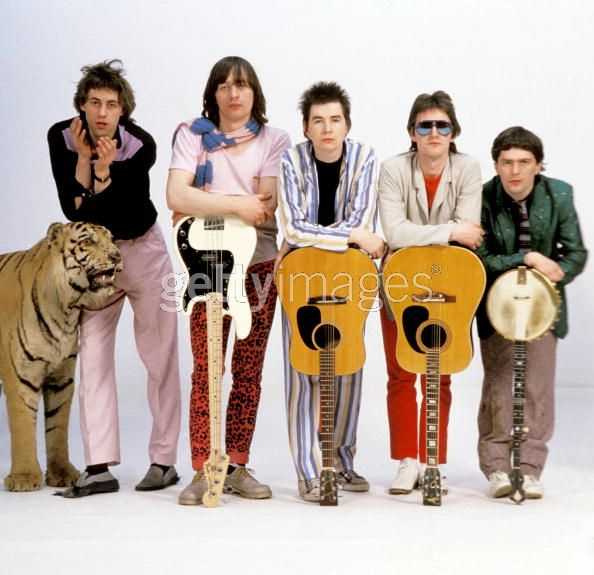 Well, I don't expect anyone to like this week's Video's of the week, at least not Scott and Jeff, who are the ones leaving the comments. Boomtown Rats is a VERY european band from the 70's. I won't use wikipedea at all, this time around, just my memory, and my personal "Boomtown Rats-story". I think a lot of people didn't know about The Rats until after Live Aid in 1985, that off course had Bob Geldorf as the brain behind. Many people probably had heard "I Don't Like Mondays" back in 1979, as I did, and I loved it at once. I saw the video on the TV in the fall of 1979, and went out, and bought the single the following day. The "new" album wasn't released yet, I learned, and I had to wait until the end of December, buying that. So I had to check out the Boomtown Rats-albums, that you COULD get in September/October of 1979. I've always liked a bit of humor in music, and Boomtown Rats didn't take themselves too seriously, just like other bands, that I liked at the time, fx City Boy and Cheap Trick. Here're some videos, look,listen and give me your comments:

This one is the first song from the debut-album by Boomtown Rats, and it's one of my favorites by the band. Sadly it's probably the only good song on the album, or maybe there was one more, I can't remember? It's been 3 decades or more, since I heard the full album. Was it produced by "Mutt" Lange? Can't remember, but I think so.

Like Clockwork and She's So Modern are both from the second album by TBR, called "A Tonic For The Troops", an album that quickly became a favorite of mine, and to this day, it's not exactly one of my favorite albums of all time, but it would probably end up in my personal Top 100, mayby even 50? This one, I'm sure "Mutt" Lange produced, and it was around this time in late 1979, that I started to notice his name as the producer of some of my favorite albums of the time, since he also produced City Boy. If there are only one or two good songs on their debut, there're only one or two not so good songs on this album, if any. I never met anyone with the same meaning as mine, though. People have rotten taste in music!!

Around December 20, 1979 the album arrived in my local vinyl-shop, "The Fine Art Of Surfacing". For a long time, this album was imo even better than ATFTT, but it hasn't aged as well. Again produced by "The Master" (except for the single "I don't Like Mondays"), and an even better pruduction this time around, which probably did the trick for me. But not all the songs are as good as before, so this time mayby a handfull of the songs are not so good, but produced very well, never the less. Since it was the very end of 1979, 1980 was just around the corner, and those who have paid attention know what that meant. It meant that within a few months, I had discovered NWOBHM by hearing Iron Maiden and Judas Priest in the same radio-show in May 1980. That meant, that this kind of music wasn't as interesting any more, not for quite a while anyway, so when Boomtown Rats released a new album in 1981, I DID buy it, but I HATED it, and I do blieve, that after maybe another album, they broke up the band. They did play Live Aid, off course, but it wasn't the same anymore. Some say, that Live Aid messed up Geldorf's music-career, I say he, and thereby also Boomtown Rats, stopped making good music in the 80's and beyond. But who cares. I still have got two very good Boomtown Rats-albums, that I listen to now and then.

SOMEONE'S LOOKING AT YOU

Only two videos played in this post, and that's the first and third ones...

Looking After #1...  I think youre right, this will not appeal to me. I remember when this style came out and it didn't play well over here.  Maybe I missed it though, but I don't remember this catching on very well.  So in my mind this is purely European music.  And did Geldof say they got a contract because they were better than every other band?  Confidence is a fine trait, but lets be real ...  this is isn't that interesting.

Shes So Modern is the next video that played and it starts exactly where that number one song song left off.  Are they the same song?  I do know the song I Don't Like Mondays and more than anything its familiar because it was heavily played, so its likely the best track because of familiarity.  Geldof did great things as an organizer and humanitarian and I'm familiar with the story of his wife, daughter and Michael Huchense.  So weird is in his DNA, but heart for the workd is where he should continue to apply himself...

Youre prediction is right, and I did not become a Boomtown Rats fan

First, Scott's right.  Only two of the videos work.

Second, Niels is right.  This has absolutely no appeal to me.  It's way too punk sounding for me.  I really can't think of three punk albums I own.  I'm sure that style has it's place, but not in my collection.

And by the way, I did listen to the two songs that worked.  I couldn't watch the videos though, because I was at work.  But those two songs just weren't good.  Sorry Niels, but this band is definitely not for me.

The first track might be "punkish", but I don't consider The Rats for a Punk-band. A Punk-band wouldn't have Mutt Lange as the producer, would be my guess.

If you or anybody else listen to the second or third (Mutt Lange-produced)-albums, it's a mix of different styles (rock, pop, reggae, ska and a little bit of punk), and very well produced (off course).

I have no way to see beforehand which video's are working in the US, so there might be a lot of those the next couple of weeks/months. But if there are too many, it could be a drag.

Normally if there is a playback problem, it's just one video.  I think this one was an anomaly, probably because it's not American AOR"ish" enough for me and Scott...

And don't worry, I'll probably pay you back on the AOTW I'm about to post. It's not AOR, but still probably too American for the Nielster.

Okay, that's a first. No one ever called me "The Nielster" before

OK, Neils, looks like it's up to me to be the first one on board with you as far as the Rats are concerned.....I love them!! There's at least a song or two off of every album they've released that I like...."Up All Night", "Drag Me Down", Mary of The 4th Form", "Rat Trap" and, of course, "I Don't Like Mondays", just to name a few of them. I may be one of the only people in Michigan who actually knew who Bob Geldof was prior to Live Aid...lol.

I honsetly think I was born on the wrong side of the pond sometimes.....lol.

Nice to hear, that I'm not the only one, Matt.

Yeah, I know how you feel. I should at least had been born in England instead of Denmark :-)