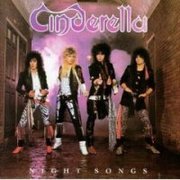 Cinderella is an American rock band from Philadelphia, Pennsylvania. They emerged in the mid-1980s with a series of multi-platinum albums and hit singles whose music videos received heavy MTV rotation.

Cinderella was formed in Philadelphia in 1982 by singer-songwriter, keyboardist, and guitarist Tom Keifer and bassist Eric Brittingham. The initial lineup also included guitarist Michael Smerick and drummer Tony Destra. In 1985, Smerick and Destra left to form Britny Fox, another Philadelphia-based glam metal band that later relocated to Los Angeles. Cinderella got their big break when Jon Bon Jovi saw them perform at the Empire Rock Club in Philadelphia and recommended that his A&R rep Derek Shulman who knew of the band, to see them as well. In 1985, with a recording contract with Mercury/Polygram Records in the works, guitarist Jeff LaBar and drummer Jim Drnec joined the band.

During the recording of the band's debut album, Night Songs, studio session drummer Jody Cortez was brought in when producer Andy Johns found Drnec difficult to work with. While finishing the recording, Drnec was replaced by former London drummer Fred Coury, who joined in time to make the album's cover and play on upcoming tours. Night Songs was released on August 2, 1986 and eventually achieved triple platinum status, selling 50,000 copies per week at one point. The album reached #3 on the Billboard charts in February 1987.

Cinderella's second album, Long Cold Winter, was released in 1988. It signified a shift towards blues-rock, though it could still be described as glam metal. A 254-show tour to support the album lasted over 14 months and included dates on the Moscow Music Peace Festival alongside other metal acts, such as Ozzy Osbourne, Scorpions, Mötley Crüe, Bon Jovi, and Skid Row. The tour's stage show included Keifer being lowered to the stage while playing a white piano during their radio hit "Don't Know What You Got (Till It's Gone)".

In 1991, Keifer completely lost his voice due to a paresis of his vocal cords. He underwent several surgeries to repair a vocal cyst and hemorrhage. This added to delays in the recording of the band's fourth album, Still Climbing. It was finally released in 1994 with Kenny Aronoff on drums, but with little support from their label, none from MTV, and the current music scene being dominated by grunge, the album quickly disappeared from the charts. The band went on hiatus in 1995.

Cinderella resumed activity in 1997, the same year Mercury Records released a greatest hits compilation titled Once Upon a.... The group toured the United States in 1998, with one stop captured on the live album Live at the Key Club, which was released in 1999 through Cleopatra Records.

Around 1999, the band was signed by John Kalodner to Sony Records. However, the band was dropped by the label before a new album could be released, plunging the band into three years of litigation. Cinderella toured again in 2000 and 2002.

As of the mid-2000s, Eric Brittingham is working with his wife's band, Naked Beggars. Jeff LaBar has an internet radio show, Late Night with the LaBars, with his wife Debby on www.realityradio.biz. Fred Coury is working with numerous bands in the studio and film, and Tom Keifer is working on a solo album. Cinderella headlined the VH1 Classic Rock Never Stops 2005 summer tour.

In 2006 Cinderella toured with Poison. Both bands celebrated the 20th anniversary of their debut albums, Night Songs and Look What the Cat Dragged In. The tour was a success and became one of the most successful tours of 2006, averaging about 20,000 people in attendance per night.

Cinderella planned to tour in 2008 with Warrant, Lynch Mob, and Lynam, but on June 13 that year, Tim Heyne, the band’s manager, said in a press release: “It is with unbelievably deep regret that I must announce that Cinderella’s Tom Keifer’s left vocal cord has hemorrhaged, thereby making it impossible for him to sing in the immediate future.” Also in 2008, Eric Brittingham was a guest on The Classic Metal Show and explained Cinderella's status. As Keifer rested his voice, Cinderella tried to aim for a tour sometime in the near future.

When Jeff Lebar was interviewed by Ultimate-Guitar, he stated that Cinderella would love to make a new record but there were obstacles holding the group back. They still were not signed to a record label after Sony dropped the band in 2000. Jeff also stated that he is busy with his new band, Freakshow, which features Frankie Banali of Quiet Riot, and Eric is busy with Naked Beggars. Jeff also stated that it would be a matter of timing. Tom Keifer still has yet to also release his solo album, which has been in the works for almost eight years.

According to Cinderella's message board in spring of 2009, Tom Keifer's voice has been restored to normal. Promoters from the 2009 Rock Gone Wild Festival have confirmed that the band is scheduled to perform at two festivals in late summer or early fall of 2009.

You need to be a member of CINDERELLA to add comments!

Comment by Jeff "Boomerzworld.com" Ernst on July 21, 2011 at 10:56pm
Just saw them from the front row and they still rock! Posted 2 pics here

Cinderella are one of the most underrated bands ever. They got labeled a hair band (not that there is anything wrong with that), but with the exception of arguably the first album they were not a hair band in my opinion. These guys are great.