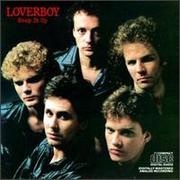 Loverboy is a Canadian rock group formed in 1980 in Calgary, Alberta, Canada.


The band got its start in Calgary, Alberta, Canada when Mike Reno (formerly of the band Moxy) was introduced to Paul Dean (formerly of the band Streetheart) at the Refinery Night Club. Dean was rehearsing a new band in a warehouse with a friend of Reno's and Mike had stopped by to jam. Over the next few weeks Reno and Dean wrote songs together on guitar and drums. Meanwhile, Doug Johnson, who was working with another band at the time, joined the band and Loverboy was born.

Originally rejected by all the major record labels in the United States the band signed with Columbia Records of Canada to help meet Canadian content laws. On March 20, 1980 Loverboy went into the studio with producer Bruce Fairbairn and engineer Bob Rock to record what would be their self-titled debut album.

Over that summer the record became a huge hit with over 700,000 records sold in Canada alone. At that point Columbia Records of the United States saw the success of the album and decided to sign the band for a release in the U.S. The album made its American debut in November 1980 and would go on to sell two million copies. The band went on a touring spree that year putting on over 200 shows with bands such as Cheap Trick, ZZ Top, Kansas and Def Leppard.

The band's follow-up album, Get Lucky, released in 1981 when they were opening for Journey, included the hit tracks "Working for the Weekend" and "When It's Over". It became their best selling album in the U.S., reaching #7 on the Billboard album charts and selling over four million copies. In the same year Loverboy received six Juno Awards (Canada's highest award for music) in one year, a record that still stands today. The band would later receive an additional three Juno Awards, bringing their total to nine, which is the most received by a single group or individual.

Loverboy released their third album, Keep It Up, in 1983. Its first single "Hot Girls in Love" became their most successful to that date, reaching #11 on the U.S. charts. The video for the song as well as for the follow-up single "Queen of the Broken Hearts" were hugely popular on MTV, and the band embarked on its first tour as headliners.

In 1984 Loverboy recorded the United States Team theme for the 1984 Summer Olympics, "Nothing's Gonna Stop You Now". The song appeared only on The Official Music of the 1984 Games not on any of their albums or compilations. It can be heard here. They would often play it on tour mixing it in during the performance of "Queen of the Broken Hearts".

Lovin' Every Minute of It, the band's fourth album and the first not produced by Fairbairn (it was produced by Tom Allom, best known for producing Judas Priest) was released in 1985, with the title single written by Mutt Lange and "This Could Be The Night" co-written by Journey's Jonathan Cain becoming their first U.S. Billboard top 10 hits respectively. In 1986 the band recorded "Heaven In Your Eyes", a song featured in the movie Top Gun, which peaked at #12 on the Billboard charts. However, Doug Johnson refused to appear in the video as he felt that the film glorified war.


The 1987 release of Wildside followed. While the band scored a minor hit with "Notorious", co-written by Jon Bon Jovi and Richie Sambora, the album sold relatively poorly and the band broke up in 1988 due to the departure of Johnson and creative and personal differences between Dean and Reno. A greatest-hits album, Big Ones, was released in 1989 to fulfill Loverboy's obligation to Columbia Records. The group briefly reunited in late 1989 to tour to promote it (with Geraldo Valentino Dominelli on keyboards in Johnson's place) but broke up again at the tour's conclusion.

In 1991, the band re-united to join fellow rockers Bryan Adams and Bon Jovi to help raise money for a friend and fellow recording artist Brian MacLeod of Chilliwack who was fighting cancer. The band reportedly recalled that the concert was the most fun that they had had in years and decided that they wanted to do it again. The band went on another live touring spree in Canada the following year before launching a 64-concert tour in the United States in 1993. The band's record label released their second and third compilation albums, Loverboy Classics and Temperature's Rising, in 1994. Loverboy Classics went Gold in 1998, coinciding with another American tour. During this time Doug Johnson was not with the band; former Trooper keyboardist Richard Sera replaced him. Following the releases of Six and Super Hits in 1997, the band continued touring (Johnson rejoined the band in 2000) until November 30, 2000, when bassist Scott Smith was declared dead after being lost at sea. The band went on to release their first live album, Live, Loud and Loose in 2001, which consisted of refurbished early live concert recordings from the band's intense touring years from 1982 to 1986. 2001 also brought another round of touring, this time dedicated to their late band member Scott Smith.

Loverboy celebrated 25 years together in 2005, and began to perform in selected cities to commemorate this milestone. That tour continued with live concerts scheduled well into August 2006. Also in 2005, Loverboy was one of the featured bands on the American version of Hit Me Baby One More Time. They performed "Working for the Weekend" and a cover version of "Hero" by Chad Kroeger/Josey Scott on the show. Currently the band features all the original members except for Scott Smith, who is replaced on bass by Ken Sinnaeve (a former member of Dean and Frenette's pre-Loverboy band Streetheart).

In 2006, twenty-five years after its initial release, Get Lucky was remastered and re-released with several previously unreleased songs, including the original demo of Working for the Weekend.

In a video interview from March 2007, lead singer Mike Reno confirmed that the band finished recording a new studio album released in 2007. The new album is titled Just Getting Started and was released in October, with a clip of the first single "The One That Got Away" available on the band's MySpace page. The band continues to tour throughout Canada and the United States.


The band was inducted into the Canadian Music Hall of Fame during the 2009 Juno Awards.

On February 21, 2010, the band performed at the 2010 Vancouver Olympics awards ceremony.

The song also made a brief appearance in the movie Click.

An early episode of South Park (An Elephant Makes Love to a Pig) made multiple references to a fictional Loverboy song, "Pig and Elephant DNA Just Won't Splice."

In Aqua Teen Hunger Force's episode Revenge of the Mooninites, Err uses the "Foreigner belt" to "Turn Master Shake Loose" to "Hot Girls in Love" because he's "Working for the Weekend". When it didn't work, it was revealed that "those are Loverboy songs, and Loverboy has always sucked." (although Carl said that he saw them at the Madison Square Garden in 1985 and they "kicked ass".) In Saturday Night Live Chris Farley and Patrick Swayze during their Chippendales skit have "Working for the Weekend" in the background as they dance.

In Saint's Row 2, Loverboy's "Working for the Weekend" was included in the game on the radio station "The Mix" which featured all popular 80's songs.

In Shaun White Snowboarding, Loverboy's "Working for the Weekend" is a track played during gameplay.

Loverboy's hit "Working for the Weekend" was the background music to a "Diet Pepsi" television commercial in which a man is asked what else he would like to experience that is youthful, and he chooses his old van from the 1980s.

"The Kid is Hot Tonight" is featured on the soundtrack of Mlb 2k9 by 2K Sports.

In an episode of Drew Carey's Green Screen Show, Brad Sherwood remarks to a character called 'Hover-boy', "I loved your album Get Lucky!" In the 2006 independent film A Dog's Breakfast, there is a Loverboy poster on the childhood bedroom wall of Marilyn (played by Kate Hewlett).

You need to be a member of LOVERBOY to add comments!

It had to be Scott, I just found it quite boring. Just Getting Started with what? Sleepy-time muzak?

I thought you liked the last one...maybe that was Scott.

LOVERBOY RE-TOOLING TRACKS FOR NEW ALBUM:
An unexpected news update on what's coming up from Loverboy - this from a recent interview with:www.theoaklandpress.com/articles/2013/08/08/entertainment/doc520167....

"Loverboy is in the midst of preparing a new album for release, a follow-up to 2012's Rock N Roll Revival, for which the group re-recorded nine of its hits along with three brand new songs. The current set will be all new material, though Reno says that some were actually written and even recorded during the '80s but never officially released. “We started to transfer our 2-inch (studio) tapes to digital, and we're listening to everything, going, 'Listen to that. What a great song!'' Reno (real name Joseph Rynoski) recalls. “Back in the old days we'd have 25 or 30 songs but could only put nine on an album. So we were sitting on all these beautiful songs — half of them already recorded and maybe semi-mixed. If you like 'Working For the Weekend' and 'Turn Me Loose' you're gonna love some of this.
“So we've got this cool package of retro-sounding stuff that we've added to a bunch of new things we've written, and it's really exciting. We're looking forward to putting it out for people to hear.”