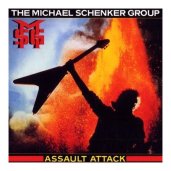 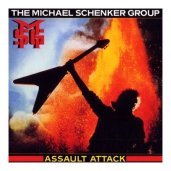 Listen HERE to the above album!


The Michael Schenker Group (or shortly MSG) is a guitar-oriented hard rock band formed in 1979 by the former Scorpions and UFO guitarist Michael Schenker. From 1986-1992, the band was known as the McAuley Schenker Group, due to Schenker wanting to split the writing process in half with vocalist Robin McAuley.
It is best described as mostly melodic hard rock with progressive undertones. Schenker is famous for his half-black, half-white Gibson Flying V and is sponsored by Dean Guitars and for his unorthodox approach to lead guitar, and is well known in the neo-classical genre.

Michael Schenker (born 10 January 1955) is a German rock guitarist, best known for his tenure in UFO, in addition to his solo work. He first rose to fame as a founding member of the Scorpions, then achieved fame in the mid 1970s as the lead guitar player for UFO. Since leaving UFO in 1978, he has been leading the Michael Schenker Group in various incarnations. He is the younger brother of Rudolf Schenker, who is still a guitarist with the Scorpions. His career has had many ups and downs, partly due to a long history of alcoholism and personal problems; still, Schenker continues to perform and record and to maintain a following, and is called "a legendary figure in the history of metal guitar.
Michael Schenker started playing guitar at an early age, after his brother Rudolf brought home a Gibson Flying V guitar, which captured his imagination. He played his first gig when he was 11 with Rudy and the Scorpions in a nightclub. Schenker debuted with Scorpions on their debut album Lonesome Crow at age 17.
The Scorpions went on tour after recording their first album, opening up for upcoming UK band UFO in Germany. Schenker was offered the position of lead guitar player (taking over for Bernie Marsden, himself a temporary replacement for Mick Bolton) and, with the blessing of his brother, accepted (the Scorpions replaced him with Uli Roth), even though he didn't speak English.
Schenker wrote the music for most of UFO's major label (Chrysalis Records) debut album Phenomenon[citation needed]. His career with UFO was turbulent—he sometimes walked off mid-song and caused shows to be canceled. Despite having a series of successful albums and tours, Schenker finally left UFO soon after the last show of their US tour in Palo Alto, California, in October 1978; during this tour, the band recorded their seminal live album Strangers in the Night, which was released after he left the band.
Schenker's playing with UFO attracted attention from music critics and especially from the guitar community; in fact, according to some writers, UFO is only to be distinguished for having had Schenker in their ranks.
Schenker briefly re-joined the Scorpions in late 1978, when they were recording the album Lovedrive (he plays lead guitar on three songs, "Another Piece Of Meat", "Coast To Coast" and "Lovedrive"). In 1979, Schenker toured with the band in support of the album, but left the band 3 months later, following occasions when he could not perform on stage due to fatigue and alcohol problems.[citation needed] He was permanently replaced by Matthias Jabs, who had originally joined the Scorpions before Schenker's return.
Schenker auditioned for Aerosmith in 1979 after Joe Perry left; according to Martin Huxley, Schenker stormed out of the room after some Nazi-jokes were made. He also considered playing for Ozzy Osbourne; Osbourne said in a 1982 Hit Parader interview that he did contact Schenker following the death of Randy Rhoads: "It so happens I did contact Michael Schenker, but he wanted a king's ransom before he'd do anything...I don't need that annoyance. Schenker himself, in an interview with KNAC radio, claims he was the one to say "no" to Ozzy: " If I would have joined Ozzy Osbourne, I would have screwed up my life. I was almost about to do it, and something told me: DON'T!!

In 1979, Schenker entered upon a solo career by founding the Michael Schenker Group (MSG). The history of MSG is strewn with personality conflicts and incidents. In 1982, original singer Gary Barden, who sang on the first two studio albums, The Michael Schenker Group and M.S.G. as well as the band's third release (the live album One Night at Budokan) was fired in favor of Graham Bonnet (Rainbow, Alcatrazz). Bonnet lasted one album (Assault Attack) and was fired from the band because he often lost his voice during shows, although the actual firing happened after he dropped his pants in a warm-up gig in Sheffield before the Reading Festival. Barden was called in at the last minute and did the show with only a few hours rehearsal. He stayed with MSG for the recording of a new studio album (Built to Destroy) and the band's second live album (Rock Will Never Die).

After Barden's second departure, Schenker reorganized the band around himself and new singer Robin McAuley and renamed it the McAuley Schenker Group.

The new incarnation of MSG was steered toward a more commercial hard rock sound. After three albums, Schenker and McAuley parted company. In the meantime, he briefly replaced Robbin Crosby in Ratt, appearing on their 1990 MTV Unplugged performance. In 1995, Schenker briefly rejoined UFO for their reunion album Walk on Water and toured with them briefly. Schenker then resurrected the Michael Schenker Group with all new members and recorded three more albums, The Unforgiven, Written in Sand, and Beware of Scorpions. He later rejoined UFO for two further releases, Covenant and Sharks.

You need to be a member of MSG to add comments!

Comment by Jon on October 17, 2010 at 11:02am
I thought I was a member of this already. Niels, if you need me to add the "Assault Attack" album or something else, let me know.