The same Venue, where I saw NMB in 2015, meaning I once again had to go to Sweden by train, but this time not by myself. I had my old friend, Johnny by my side.

I was surprised of the seize of the crowd this time. It was definitley full house, meaning 1,000 people. In 2015 it was probably half-full, which was both good and bad. I was happy for the band, that it was full house, and it was also a pretty noisy crowd, but that also meant, that it wasn't as easy as last time, to hold your spot, again 5 feet or so from the stage, but it worked out fine, and it's a great spot to see everything very clearly on stage (except for the odd tall guy standing in front of you, but I'm pretty tall myself, so..!)

I was aware, that they would play TSOAD from start to end, and since I'm still absolutely loving that double-album, it couldn't be better. No support-band, which meant they played 2.5 hour (with a stupid intermission, but more about that later) from 8.00 PM until 22.30 PM.

Playing an album from start to end also means, there's no room for improvising, and that was one of the main differences from the concert in 2015 and this one.

Bill Hubauer on Organ, Piano, Synth, Mandolin, Saxophone and sometimes lead-vocal, made a few mistakes and errors, but I'm fine with that, it's live. He also had a lot of different instruments to take care of. But he has an amazing lead-vocal, also live. Gillette is an amazing guitarist, and played the solo's note for note, with no errors, but it sounded like his voice was a little used or else his microphone was a little too low. Morse was VERY active running around on stage, and his voice was kind of gone at the beginning of the concert on the high notes, but he got warmed up, and sounded just fine after half an hour. He was very "Theatrical" and changed "costumes" 3 or 4 times, and wore different masks, kind of like Gabriel in the early Genesis days, only not as strange. He used a black and a white "hood", two masks and a flashlight in his own face. Morse played accustic guitar, but also electric, and a few of the solo's on the album is actually him playing them. His main-instrument was synth, usually played with one hand, while the other up in the air. There were also films playing on a screen in the background of the stage, following the story of the album (as always, when it's Morse, a story about good and bad, and a man finding God).Portnoy was "quiot" compared to the concert in 2015, and there was no solo from him, but he's quite a showman, and an important part of this band. In fact there were no solos at all (except for the ones also on the album), and in 2015 there were lots of solos, so I'm glad I've seen both concerts, because they were very different to each other.

After "the first CD", there was an intermission for 10 minutes, which was weird, but maybe it made sense after all, because when they returned to play "CD 2", they were even better than in the first half. They even did SOME improvisation and both Morse and Portnoy at last adressed the audience, both funny guys. One of many highpoints was when they all took the center of the stage, and played "Freedom Song", by now not among my personal top 5 from the album, but last night it sounded awesome again. The band and especially Morse were completely on fire at the end of the concert (before encore), and I feel lucky being there, witnessing this tour.

Some bands like Cheap Trick plays concerts were they play for example "In Color" from start to end, but it's not 1977 anymore. I saw this album performed live 5 months after the release. Classic stuff!!

This time, I/we stayed for the encore, and this time they played 2 songs from the former NMB-album, songs they also played in 2015. It was a nice ending to my (so far?!) two NMB-band concerts. 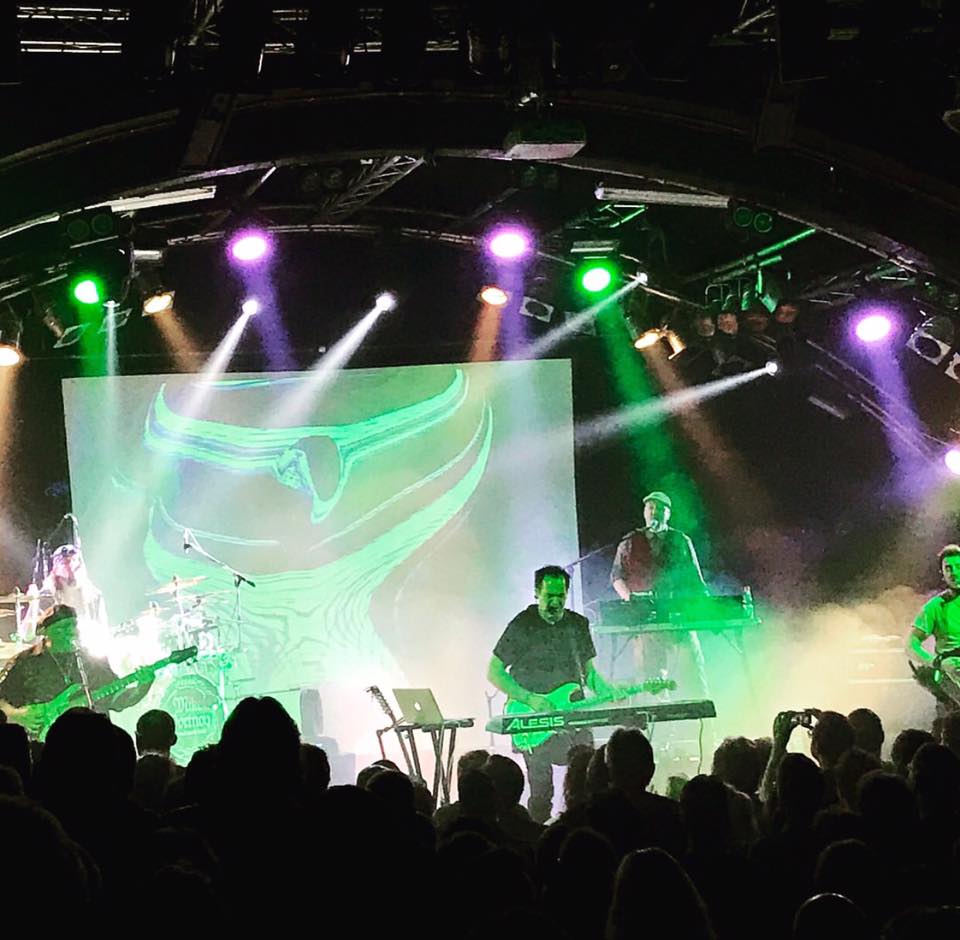 An actual image from the concert. I'm pretty sure, it's my head just below Eric Gillette, no kiddin'. Some idiot filmed the encore, but it's upside down. It's not me, my Iphone was in my pocket the whole concert.

Nice!!!  I would love to see this quality of a band at such an intimate venue.  We have a place in Charlotte called the Filmore that holds about 2000 (maybe slightly less), seen a few bands there and its loads of fun!  Also watched the clip and it stellar!  Didn't see anything upside down though...

I haven't yet seen a band doing full album sets, though I would love to see Kansas do Lefoverture, but its not the original band so maybe not...  Who knows, seeing the Who play Who Next would be the thrill of a lifetime!!  But thats not gonna happen either...

Are these your pics?

No, I usually don't take pictures at the concerts, I attend. These are from a show in Poland a week ago or so, except the last one, where you probably can spot my neck.

Yeah, I can see, that he fixed it, so it's not upside down anymore. I think I noticed the dude who filmed. He was just to the right from me, so you can imagine how close I/we were to the stage, meaning in "5th row" or something. Off course it was 10,000 time better in real life, than this clip, but you get the idea.

I knew as soon as I saw that last photo that had to be your neck.  I just knew it.  Well, I had a chance to see them a while back and I just never made it happen.  It would have required me to travel to Atlanta and I just didn't bother.  But I really would like to see them.  You know I'm a big fan of that album.  I haven't listened to it too much this year though. As a matter of fact, I haven't listened to nearly as much as I'm used to.  Unfortunately, it's just too difficult to find the time these days.

I do like that there were no solos.  I too am not crazy about the idea of an intermission, as who wants to try to hit the head at the same time as 999 other people?  But, it probably worked okay here, since it's a double album and that would mimic the changing of the CD.

Nice write up, but I knew those weren't your photos.  Too bad, you were close enough that you could have definitely taken some.

On a totally different point, I listened to most of All Things Must Pass yesterday while at my son's baseball practice.  I am quite impressed.  If I'd only known that years ago I could have listened to it so many more times.

I'm only listening to Neal Morse and Jethro Tull at the moment, and have for a month or so now, not planning to stop. I'm convinced, that imo TSOAD is the best album released since 2000, probably menaing it's the best album since....I don't know?...Appitite for Destruction??! I did eventually buy "?", and low and behold, that album might just be the second best Neal Morse-album ever? Either that or Testimony II of course.

Well, the solo's in 2015 were pretty outstanding, as they played solo's on each other's instruments!!

Yeah, I could probably had taken some cool Photos, but imo Photos can never ever replace reality, and neither my rememberence of how it was.

ATMP is a good album, but it's certainly overproduced.