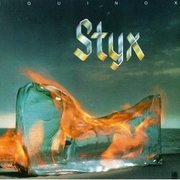 Styx is an American rock band from Chicago. Started in the early 60's by the Panozzo brothers and Dennis DeYoung, the band started using the Styx name in 1970 and, although with a different line-up, is still touring today.

Although they began as an artsy prog rock band, Styx would eventually transform into the virtual arena rock prototype by the late '70s and early '80s, due to a fondness for bombastic rockers and soaring power ballads. The seeds for the band were planted in another Chicago band during the late '60s, the Tradewinds, which featured brothers Chuck and John Panozzo (who played bass and drums, respectively), as well as acquaintance Dennis DeYoung (vocals, keyboards). By the dawn of the '70s, the group had changed its name to TW4, and welcomed aboard a pair of guitarists/vocalists, James "JY" Young and John Curulewski -- securing a recording contract in 1972 with Wooden Nickel Records (a subsidiary of RCA). Soon after, the group opted to change its name once more, this time to Styx, named after a river from Greek mythology that ran through "the land of the dead" in the underworld.

In the spring of 2003, a new studio album featuring Gowan arrived in stores. For Cyclorama, Styx consisted of Shaw, Young, Burtnik, Sucherman, and Gowan. The album also featured guest appearances from John Waite, Brian Wilson, and actor Billy Bob Thornton. By the end of the year, Burtnik was out of the band and replaced by former Bad English and Babys member Ricky Phillips, although Panozzo did play with the group on selected live dates. The two-CD Come Sail Away: The Styx Anthology from 2004 did an excellent job representing the band's career, while 2005's double-disc The Complete Wooden Nickel Recordings collected the band's first four albums. That same year, Styx released the cover version-filled Big Bang Theory, featuring some of their favorite picks from "the Great Rock Songbook."

I'm gonna name 5 Styx albums.  Everybody should rank them from 1-5, with 1 being your favorite and 5 being your least favorite.  I'll chime in with my answer in a reply instead of right here.  The 5…Continue

from classic rock revisited: BY JEB WRIGHTOn stage, the band Styx career has been filled with Top 10 singles and albums with music ranging from Progressive Art Rock to teenage pop tunes. The band…Continue

You need to be a member of STYX to add comments!