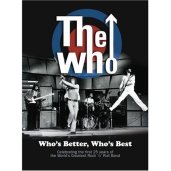 The Who are an English rock band, formed in 1964: vocalist Roger Daltrey, guitarist Pete Townshend, bassist John Entwistle, and drummer Keith Moon. They became known for energetic live performances. The Who have sold about 100 million records.

They went right from Monterey to another U.S. tour, this time opening for Herman's Hermits, which was an impossible fit for both groups. The other British outfit, pop/rock favorites for three years, was still drawing an audience consisting mostly of younger teenagers -- and mostly girls -- enamored of Peter Noone, the cheerfully charming lead singer. Here were the four members of the Who, Daltrey all macho swagger and hardly "safe," backed by Townshend with his beak of a hooter, the stoic, ominously stone-faced Entwistle, and Moon the madman at the drums, doing hard R&B and a set of mostly edgy hard rock with their amps turned up to 11, trying to deal with crowds chanting "We want Herman"; the tour wasn't helped by the fact that, thanks to the publicity they'd gotten belatedly about their old British act, they'd been forced to go back to smashing instruments, so that Noone often came onto a stage littered with the pieces of one of Townshend's guitars. It was all so surreal that it's a shame no one filmed any of the shows along the tour, which did nothing for the band. Additionally, they felt awkward reverting to their old stage act, as they'd finished work on a new album, and an accompanying single, that represented a new phase musically.

You need to be a member of The Who to add comments!

Heard this on the drive home tonight, courtesy of Little Steven's Underground Garage.  Never have been much of a fan of The Who's early stuff, but maybe I should revisit that.  I like this one:

Apparently they are compilation-albums containing demo's of released/unreleased Who-songs, even though I didn't know they excisted. But as I said before, a lot of Townshend's best work doen't really appear on the "real" Who-albums (but on the Deluxe-versions), AND that Townshend (imo) probably is on par with Daltrey as a singer, or even better. It's HIS songs/lyrics, and mostly the lyrics are VERY personal.

Question about Pete Townshend.  What's the deal with his "Scoop" albums?  I listened to a sample of his version or demo of Behind Blue Eyes and he sounded fantastic.