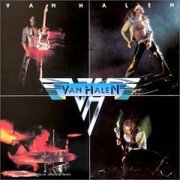 We love any and all Van Halen lineups in this group. Great music since 1978!!! Maybe more to come, who knows???

Biography With their 1978 eponymous debut, Van Halen simultaneously rewrote the rules of rock guitar and hard rock in general. Guitarist Eddie Van Halen redefined what electric guitar could do, developing a blindingly fast technique with a variety of self-taught two-handed tapping, hammer-ons, pull-offs, and effects that mimicked the sounds of machines and animals. It was wildly inventive and over the top, equaled only by vocalist David Lee Roth, who brought the role of a metal singer to near-performance art standards. Roth wasn't blessed with great technique, unlike Eddie, but he had a flair for showmanship that was derived as much from lounge performers as Robert Plant. Together, they made Van Halen into the most popular American rock & roll band of the late '70s and early '80s, and in the process set the template for hard rock and heavy metal for the '80s.

Throughout the '80s, it was impossible not to hear Van Halen's instrumental technique on records that ranged from the heaviest metal to soft pop. Furthermore, Roth's irony-drenched antics were copied by singers who took everything literally. One of these was Sammy Hagar, an arena rock veteran from the '70s who replaced Roth after the vocalist had a falling out with Van Halen in 1985. Hagar stayed with the band longer than Roth, helping the group top the charts through the late '80s and early '90s. However, the group's sales began to slide in the mid-'90s, just as tensions between Hagar and Eddie began to arise. In one of the most disastrous publicity stunts in rock history, Hagar was fired (or quit) and Roth was brought back on, seemingly as a permanent member, but only for two songs on a greatest-hits album. He was subsequently replaced by Gary Cherone, a former member of Extreme.

Through all the upheaval over lead vocalists, Eddie Van Halen and his prodigious talent remained the core of Van Halen. The son of a Dutch bandleader, Eddie and his family moved from the Netherlands to Pasadena, CA, in 1967, when he was 12 years old and his older brother, Alex, was 14. As their father supported the family by playing in wedding bands, Eddie and Alex continued their classical piano training. Soon, both boys were enraptured by rock & roll. Eddie learned how to play drums and Alex took up the guitar, eventually switching instruments. The brothers began a hard rock band called Mammoth and began playing around Pasadena, eventually meeting David Lee Roth. At the time, Roth, who had been raised in a wealthy Californian family, was singing in Redball Jet. Impressed by the Van Halen brothers, he joined forces with the group. Shortly afterward, bassist Michael Anthony, who was singing with Snake, became a member of Mammoth. After discovering that another band had the rights to the name Mammoth, the group decided to call themselves Van Halen in 1974, rejecting the proposed Rat Salade.

For the next three years, Van Halen played throughout Pasadena, Santa Barbara, and Los Angeles, playing both clubs and hotel bars. The band's repertoire covered everything from pop and rock to disco, but they eventually worked in their own original material. Within a few years, they had become the most popular local band in Los Angeles, and Eddie became well known for his groundbreaking technique. In 1977, Kiss' Gene Simmons financed a demo recording session for Van Halen after seeing them at the Starwood Club. On the strength of Simmons' recommendation, Mo Ostin and Ted Templeman signed Van Halen to Warner Bros., releasing the band's debut the following year.

The next three years found various members tending to situations both personal and professional. Eddie and longtime wife Valerie Bertinelli separated, Michael Anthony began making regular appearances with Sammy Hagar's Warboritas, and in a surprise move, David Lee Roth and Hagar hit the road together for the popular Heavyweight Champs of Rock & Roll Tour. In 2004, the band announced that Hagar would return to the fold for an American tour in support of a new greatest-hits collection, The Best of Both Worlds. The shows were undeniably successful, but tensions were high and Hagar and Anthony returned to the Warboritas the following year. In 2007, Van Halen were inducted into the Rock & Roll Hall of Fame and rumors of a reunion tour with Roth began to circulate again. Those rumors were confirmed on August 17th when the group announced legitimate dates, along with a controversial lineup change that replaced Michael Anthony with Eddie's son Wolfgang on bass. The tour kicked off in September and went on to gross over 93 million dollars.

David Becker, Getty ImagesAll signs point not just to a full recovery and return to the road for Eddie Van Halen, but some…Continue

From melodicrock.comVAN HALEN CANCEL POSTPONE USA DATES FROM JUNE 26: Van Halen have postponed all tour dates after June 26 without warning and without explanation. This comes not long after adding…Continue

What are your top 10 Van Halen songs from the David Lee Roth era?  Of course, that would be from the first 6 albums: Van HalenVan Halen IIWomen And Children FirstFair WarningDiver Down1984 I'll post…Continue

You need to be a member of VAN HALEN to add comments!

It's been pretty quiet on the VAN HALEN front lately but we've now found out why – they're working on a new album. ALTER BRIDGE guitarist Mark Tremonti broke the news when he was telling VH1 Radio Network's Dave Basner about how new music is coming along with his solo band, TREMONTI, which includes VAN HALEN bassist Wolfgang Van Halen.

Said Mark: "With Wolfgang in the band now, he does a lot of work with VAN HALEN right now, they're putting together a new album, so it's going to be hard to get everybody's schedules to line up."

After singer David Lee Roth said in an interview last summer that VAN HALEN has started work on its 13th studio album, the next question was whether the material will be freshly written or pulled from the band's vaults. Many of the songs on 2012's "A Different Kind Of Truth" originated from demos going back to the group's earliest days, and Wolfgang Van Halen told The Pulse Of Radio that there's more where that came from. "There's plenty of other ideas lying around and some new stuff that we've been working on too," he said. "You never know what'll happen."

According to The Pulse Of Radio, Roth told comedian Jim Florentine back in August: "I was up at [guitarist] Edward's [Van Halen] house three days ago, and we're starting to put music together. We're writing; I write lyrics routinely and the band plays together routinely, at least three times a week up at Ed's place."

But Roth also cautioned that fans should not expect to hear the finished follow-up to 2012's "A Different Kind Of Truth" for at least 18 months.

"A Different Kind Of Truth" was the first new VAN HALEN album in 14 years and the first since 1984 to feature Roth, the band's original singer, on lead vocals.

The disc debuted at No. 2 on the Billboard album chart, selling 187,000 copies in its first week of release.

The group toured through the spring and early part of the summer of 2012 behind the album, but abruptly pulled off the road that June due to "exhaustion." A severe intestinal disorder later sidelined Eddie Van Halen, restricting the band to only sporadic live shows since.

I saw that yesterday.  I can easily live with 18 months.  But if it happens, it will be longer than that. Former Van Halen bassist Michael Anthony says he was flattered by comments his former bandmate David Lee Roth made about wanting him back in the famous group recently. As he jokingly noted, “He never used to talk like that when we were all playing together.”

In an interview with Eddie Trunk, Anthony touched on a number of topics, including the possibility of joining hisChickenfoot (and former Van Halen) bandmate Sammy Hagar on the singer’s upcoming multi-band career retrospective tour (“Sammy wants me to be a part of that, because I was a part of that”) and the future of their current band (“We’ll get back together as soon as the schedules align… probably in the fall”).

When asked about Roth’s comments, Anthony, who was replaced by Wolfgang Van Halen when Eddie and Alex Van Halen reunited with Roth in 2007, seemed legitimately touched. “I really don’t know what to say to that. It was flattering that he said that.” But he also makes his priorities clear: “At this point in your life and career and whatever, the career aside, it’s more about the friendship and just people. And if the music side of it, if that happens, if that comes about, all the better, but that’s not what it’s really about at this point.”

In comments picked up by multiple media outlets, Roth said on the Sirius Opie & Anthony radio show yesterday that Van Halen were "going to be playing Europe -- probably 50 or 60 shows starting at the end of this year."

Azoff begs to differ. "All the announced dates, which include the date in Australia, the dates in Japan and a date in Wisconsin, are confirmed and on sale and those are real," Azoff tells Billboard exclusively. "I manage the Van Halens, and I know nothing about any European tour."

While he wasn't sure what Roth was talking about, Azoff confirms that Roth will indeed front the band that will play the scheduled dates, which include the Stone Music Festival in Sydney on April 20; June 21 at the Tokyo Dome, and June 24 and 26 at Osaka's City Central Gymnasium.

The band played 46 shows last year and grossed $54 million, with attendance of 522,296, according to Billboard Boxscore, eighth among all touring acts for the year.

On the recording front, Wolfgang Van Halen RECENTLY TOLD BILLBOARD that the group is open to following up 2012's "A Different Kind of Truth," which debuted at No. 2 on the Billboard 200 in February.

"Oh yeah, there's plenty of other ideas laying around, and some new stuff that we've been working on, too," Van Halen says. "You never know what'll happen."