It is hard to believe that in all these years I have never tackled the subject of Birthdays as a Theme.
I'll take care of that beginning here and now.
Birthdays are fascinating- some people eagerly look forward to them while others dread them.
But the one indisputable fact is that we all have them!
Everyday is someone's birthday.
So a Celebration of All Birthdays Within the Calendar Year, leaving no one out.
And I hope this is a SURPRISE, lol!
Here are the links to something we all share, at Mike Pell Rockollections:
At Podomatic:
http://radiopell.podomatic.com/entry/2014-03-09T20_15_29-07_00
At Soundcloud:
http://soundcloud.com/radiopell/01-happy-birthday-2012
Mike

But I am jealous, damn 8 inches, good for you!

They say it might snow here Monday for the Patty's Day Parade.

I remember reading Cameron Crowe when he wrote for Rolling Stone.

What is most amazing is the way you took apart that poster and broke it all down for me, lol!

You have your moments of brilliance!

Did we get the snow? Hell, yes! Shovelled twice and snowblew (snowblowed?) once. Think we got around 8 inches and there's supposedly more on the way next week??

Yeah, different Penn, yeah he's the one that died. But if you look at the poster, it's the same writer as FT (Cameron Crowe).

And the 3rd time's the charm, lol!

Is that the sequel?
With a different Penn, the one who got fat and then kicked?

He had too many Fudgie The Whales!
Doesn't look like a sequel to me.

Did you get the snow?

In the teens here this morning, staying in the 20's with a wicked wind giving it the famous "FEELS LIKE...", lol!

Sure, I liked it, but not sure if I could like it twice. Is that even allowed.

"What in the hell is Fudgie The Whale?"

Are you kidding me? Ask 5 people what Fudgie The Whale is. Guarantee a majority know. If not, they are not true blue New Yawkers or Jerseyites. 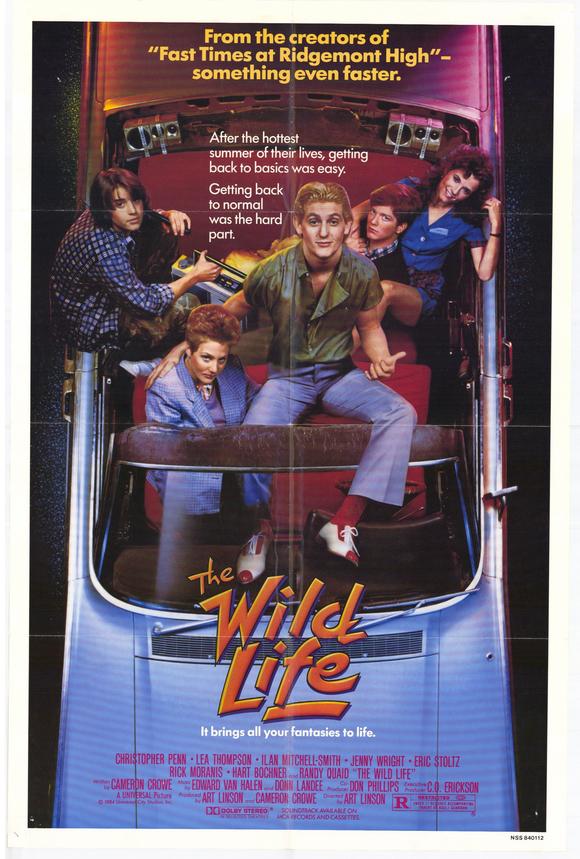 Comment by Mike Pell on March 11, 2014 at 6:42pm
Jon,
You're sharp, it's 2 years old- and as I said my borthday is on the 21st.
But did you get me a present, lol?
Now here's where the headache sets in- "something was mentioned about "Fast Times At Ridgemont High" since this song was featured in that movie plus it's the movie that featured Nancy Wilson and she was also in the "sequel" to "Fast Times..." but it's not REALLY a sequel but kind of a sequel but not really yet it is what it is and if you watch them back-to-back you kinda get a vibe of a sequel but not really a sequel as I stated before."
HUH?
Oh, right, lol!
Hehehehehehe...I've done that to people with all kinds of songs, place speakers on each side of a sleeping person & turn the volume WAY up.
I remember one time coming back from fishing in a car with a guy asleep in the back.
I had Pink Floyd on tape, cued it up and turned that part with the alarm clocks ringing all the way up- and BAM, scared the crap out of him...he didn't know where he was, lol!
You HAVE to accept it, what else cn yiu do?
What in the hell is Fudgie The Whale?
Good first answer though, lol!
I also hate birthdays.
And I would refuse to share a crappy regular cake with 3 other people that share a birthday not on the SAME date, but AROUND the same date as yours!
That sucks!
Did you like the show or not?
Can't be sure because you ended the statement with a question mark.
As for my weather, no snow in a week, and today in the freakin' 60's- came out of nowhere!
I'm airing out the house now.
The forecast for Thursday is snow, lol!
But you might get 8-12 inches?
That is awesome, and I am jealous!
Thanks for the listen and writing, not the headache, lol,
Mike

Saturday this Wednesday's forecast was 2-4 inches of snow.

Sunday this Wednesday's forecast was snow showers, little to no accumulation

Yesterday, this Wednesday's forecast was 2-4 inches of snow again. Plus, it was really nice out yesterday, temp in the 40's, so I opened up windows and aired out the house.

Today, the forecast for tomorrow is now 8-12 inches of snow.

The dates on this show were confusing? Is this old? Tomorrow isn't your birthday! Or, is it? Does it really matter? Did I get you a present?

Yeah, kinda deja vu here. That "Raised On Radio" song, you've played that in a different show plus I'm thinking in this show which is an older show but maybe not but could be because I think something was mentioned about "Fast Times At Ridgemont High" since this song was featured in that movie plus it's the movie that featured Nancy Wilson and she was also in the "sequel" to "Fast Times..." but it's not REALLY a sequel but kind of a sequel but not really yet it is what it is and if you watch them back-to-back you kinda get a vibe of a sequel but not really a sequel as I stated before.

What's really fun is to place speakers on each side of a sleeping person, turning the volume WAY up and then playing "Birthday" by the Beatles. They wake up freaking out, then they get really angry and then acceptance sets in. Well, acceptance sets in as long as it's their birthday since you went that extra mile. If it's not their birthday, they remain pissy throughout the whole day. Studies have proven this.

Now I don't care about my birthday. For the last 10 years or so, I've been demanding Fudgie The Whale and have been let down every stinking year. The man thinks it's a funny and slightly cute joke when every year they ask what I want for my birthday, I first say "World peace" and then laugh because I could care less about THAT, and then I say I want Fudgie The Whale and THEY LAUGH AT ME. Instead, I have to share a crappy regular cake with 3 other people that share a birthday not on the dame date, but around the same date as mine. Really pisses me off.

Liked the show though?