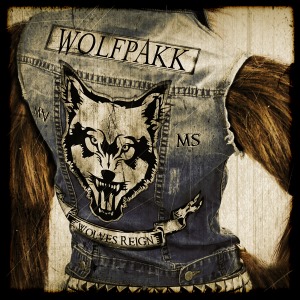 WOLFPAKK is the brainchild of two accomplished Heavy Metal veterans; Michael Voss (Mad Max, Casanova) and Mark Sweeney (ex-Crystal Ball). Same as for their previous albums, the line up consists of envious list of guest musicians for the fourth full-length release. Beside the two masterminds of this project, each song has another singer rounding the number up to three vocalists in total, as well as some notable guitar players to add diversity to the sound.

2. Run All Night ft./ Mike Vescera (Obsession) (v) doesn't let go of the throttle from start to finish. The urgency implied in the title of the track is well conveyed with a furious rhythm of the music.

3. Blood Brothers ft./ Biff Byford (Saxon) (v) / Brad Gillis (Night Ranger) (g) Biff's authoritarian, rusty voice provides a sharp contrast to the Native American chants heard in parts of the song, while Brad's guitar solo gets the blood rising up like on cue to the suggestion made by it's lyrics.

5. No Remorse ft./ Oliver Hartmann (At Vance) (v) offers no apologies for the amount of melodies it churns out, with an impossible to get rid of earworm chorus.

6. Inside The Animal Mind ft./ Jioti Parcharidis (Victory) (v) is another rocker done little bit by the numbers.

8. The 10 Commandments ft./ Pasi Rantanen (Thunderstone) (v) Surprisingly, I never pegged Wolfpakk for Sunday Scool teachers and honestly this track wouldn't be out of place on a STRYPER CD, but I found the song interesting and enjoyable. The Biblical event serves as a base for the lyrics, accompanied by a musical arrangment to capture the essence of a hymn. Although subtly, even the guitar riff sounds like a church organ.

9. Mother Earth ft./ Ronnie Atkins (Pretty Maids) (v) / Jen Majura (Evanescence) (g) Clocking at past the 8 minute mark this song not only by it's length but also instrumentally and lyrically is borrowing from a progressive rock genre. Another surprise from Wolfpakk, as they dig deep into our consciousness to protect the environment:

"Mother Nature what have we done to you?
We are on our way, but only passing through."

11. I'm Onto You ft./ Andy Lickford (Killer) (v) / Chris Holmes (ex-W.A.S.P.) (g) does a great job of closing the disc. Special credit goes to Holmes for not resting on his laurels. This song will make you feel the next project is not coming fast enough.