49 Powwow's To DistilLate The Salas Party

"DistilLate" As you might have guessed, this is the dawn of a new series. It replaces the old SpotLate feature, to expand on the work of the artist in question, beyond their main body of work, to include guest appearances, as well. Yeah, it's the Best Of, to end all Best Of compilations. First up is:

Stevie Salas a Native American guitarist also known as Sass Jordan's ex-boyfriend, Rod Stewart's and Mick Jagger's touring guitarist, music director for American Idol, recipient of the Native American Lifetime Achievement Award and even worked with Justin Timberlake on a song "Dead and Gone," that eventually reached #2 on the US Billboard. He also wrote Soundtracks.

Credit where credit is due:
On "Too Many Mountains", Rick Nielsen (Cheap Trick) and Zakk Wylde played Guitars, Phil Soussan was on Bass, Randy Castillo on Drums and Sass Jordan on Vocals. "You Can't Judge A Book" saw Richie Kotzen on Guitars and Slim Jim Phantom on Drums. "Tell Your Story Walking" is supported by Brian Tichy on Drums and T.M. Stevens on Bass. Cheap Trick's keyboard player Phil Cristian's solo album had Jason Scheff (Chicago) as a guest artist, beside Stevie Salas. After leaving Bananarama, the wife of Dave Stewart (Eurythmics) Siobhan Fahey, teamed up with  Marcella Detroit to form the duo Shakespear's Sister. "You're History" peaked at #7 in UK. T.M. Stevens worked quite a bit with Stevie Salas, so it was only a matter of time Stevie returned the favor. On "Blue Sky Complex", Richie Kotzen played the left side guitar solo, while Stevie settles on the right. The christian Metal singing god Ken Tamplin, made another CD, collecting all his guitar buddies. Stevie Salas was among them, providing the 2nd. guitar solo on "Hare' Kristians", while Pete Lesperance (Harem Scarem) played solo #1. 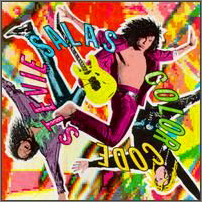 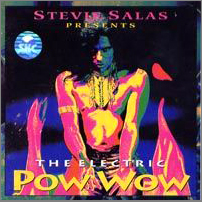 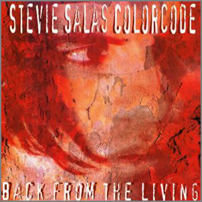 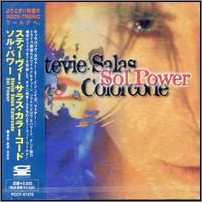 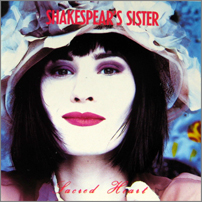 I like the funk, blues and rock mix.  The cover art on that first album is very early 90's.  I'm so glad that style is gone.  Because I'm not aware of this artist, If I was in the record store and seen this I wouldn't have given it any thought at all.  I often fuss about tin sounding drum production of the early 90 releases as well. I'm not a fan of that, but that aside, the guitar work is really very good here and I love the blues sounding tone of his rhythm work.  His vocals and choruses could use some pepping up as they are not the memorable parts of these songs.  Still, its a cool musical mash up of styles.  I'm looking forward to hearing his progression as an artist and guitarist on the rest you have here...

And I'm, looking forward to hear about your progression into his catalog.

ALL new to me, but Salas really won me over when he did Bo Diddley!

Thanks for the listen and writing.

Yeah, I stole it from someone.

Going to try and catch up with these. Last one I had time to go thru was the Streetheart one, don't think I had time to leave any response but I did listen and was a bit happy that their first album wasn't included since I was going to post that one but will now wait a little.

Anyway, this started off good, don't have a problem with his voice and he has some funky licks. However, I do get a little bit in not caring mode with most of those last four tracks, especially SS since that was not a good song in any which way. I think I have Salas on something, but am too lazy (as usual) to look. EH, maybe it's the Sass Jordan connection that gives the name the familiarity, but who knows.

Yeah, that first album cover is pretty bad. It looks like an album cover by that guy that had that hit who didn't wear a shirt. And had long curly hair. You know....THAT guy.

I did post the First, Second and Sixth album by Streetheart... (and that's all I have from them)

Unless, they have another first album I don't know about. Of course, I only posted few songs from the album, so you can still post the whole thing.