ALBUM OF THE WEEK # 146 LEDFOOT MESSIAH - FINDING WHAT HURTS 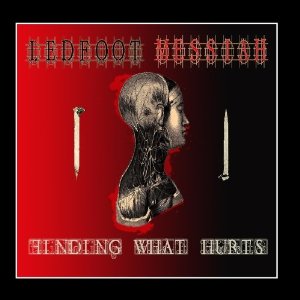 Song Of The Week: Tongue Bone

I'm gonna take time out of my "classic artists in the 2000's" theme this week and post a special.  And I'm gonna do it two days early so everybody has plenty of time to listen to it (over and over).  A few weeks back, Gordon contacted me and told me he was sending me a CD of a local Atlanta band that he is a big fan of.  I got the CD last week and truth be told, I have not stopped spinning it yet.

The band's name is Ledfoot Messiah.  They mix different influences together and put down a really good product of heavy rock.  I've heard traces of Kiss, Tesla, Deep Purple, Soundgarden and The Sword, to name a few.  I guess I should tell you who is in the band:

And just like that, the disc is over.  Way too soon.  Everybody here at The Bottom knows I'm not a fan of long running albums.   This one clocks in at about 32 minutes, which is right in my comfort zone.  But I'd love to have another song or two.  Anyway, I think it's pretty obvious that Finding What Hurts is, in my opinion, an outstanding debut album.  So all of my thanks go to Gordon for picking up a copy and sending it to me.  If there were two things on my wish list for Ledfoot Messiah, they would be:

***For anybody new to this site, click the album cover above to listen***

Purchase this album on Amazon

Are they Falcons fans?  It will be a factor I have to take into account whether I like them or not.

Yeah people, you need to listen to this. Forget about the mention of Kiss, Just strike Kiss from your mind. If you want some groove-rock with lots of geetar (and without the overuse of the word "yeah"), this album is for you. I'm totally liking this and kudos to Gordon for the introduction via Rjhog.

Be sure and order it to support the band so they can make some more music.  Gordon said they had a live CD that had all different songs on it.  They were making an album with those songs but something happened and it got scrapped.  Then they ended up making this one.  My first thought would be that maybe the songs weren't as good, but Gordon says they are.

First of all I gotta say thanks to Jeff Hogland for posting this. I hope you guys like it. I mean...come on, a rock band with a name like Ledfoot Messiah? Just Ledfoot is already a cool name, but to come up with tacking on the Messiah part just instantly makes me think of classic rock n roll.

Anyway I hope you will support these guys. Not because they are world class musicians with good songs, but because they are such great guys. All of them very talented, but they are all very friendly, with no arrogance or rock star attitude. But I hope one day they are known world wide. Every member of the band has taken their time to say hello to me, shake my hand, and thank me for the support....every time I see them.

I will certainly try to get their live CD for everyone to hear sometime. It's smokin' good too, and that batch of songs deserve to be heard by the rock fan masses. A little heavier maybe with a little more guitar lead. And Jeff Langston sings live as well as most anyone in my opinion. Please consider supporting these guys, and order your own copy of this quality CD. Thanks Rockers!!

OK, you've got me interested...  I love the feel of the tunes, classic rock influenced, great use of riffs, keyboards are perfectly integrated and not overpowering, nice beats, cool variation in songwriting without losing their identity.

I didn't care for the lead off track, but loved what came next!  Surprisingly, Dust of Dead Weight really worked for me, love the blues heavy, keyboard rhythm of that one.

I want to hear more power behind the drumming though.  This sounds like the type of band who needs a powerful drummer not just a beat-keeper, that's my only issue with this...  Maybe its a production issue, or maybe the drummer needs to step up his game!  Otherwise, I'd like to hear more!

The drummer is a solid drummer. He would not be in the band, if he weren't. And the producer of this record is also a strong drummer, and plays in a local band called Volume 4 (original music band with a definite Sabbath feel).

But I do respect your opinion Scott, and I do thank you for listening. I hope  you'll listen another time or two, and see if it grows on you. But one more time....these guys are just class acts. As nice and as friendly as they could possibly be.

Permalink Reply by Scott on March 18, 2013 at 8:05am
I totally want to hear more. I think my comment came across harsher than intended.

Correction on my part. Mike Froedge, who I think did an outstanding job producing this CD, is the drummer of Atlanta area, original music band "The Dreaded Marco", not Volume 4. My apologies for the mistake,

I have to say I'm really looking forward to a show here this coming Friday night the 22nd. Ledfoot Messiah, The Dreaded Marco, and Volume 4' all on the same show. Three great bands for $10, maybe less. The venue is nice, too. The Georgia 120 Music Hall and Tavern,actually in Marietta, Georgia. Very close to I-75 South on Georgia 120. Great sounding room with plenty of space, and a nice large stage high off the floor.

So, yo...Scott and RJHog???  Road trip??? C,mon guys, it's not that far from Charlotte or Augusta. Ya'll could even hook up along the way, and share part of the ride!! Line up a babysitter (if needed), bring your "lovelies" along, and come have a killer night of excellent rock n roll!

I'm serious! I drove to Augusta before (and drove back the same night) to see Black Stone Cherry. They were opening for Theory Of A Deadman (who I knew nothing about at the time).BSC had just released "Folklore and Superstition", and Theory's "Bad Girlfriend" was already starting to become the huge hit it became. I also used to drive from ATL to various Florida areas for many years to see my friends "Stranger" (rest in peace, Ronnie Garvin). Some of the best times of my life....with great music being at the center of it all

Think about it guys! You could get a cheap hotel for the night along the freeway, and spend less money than on...say, just ONE ticket to a Kiss/Van Halen/Black Sabbath show. Anyone within a 3 hour drive (or so) of Atlanta should consider this...if you love original music, hard rock. 3 very talented bands on one show.

I would love to do that, but I can't this weekend.  However, if Scott is interested, I'd like to get a future trip to Atlanta planned to take in a Ledfoot Messiah Show and a brew or two.

Maybe even Jon could fly in...

Got to see LFM live again this past Saturday night. The more I hear them, the more I wanna hear more! So yeah, I just wanted to post this to bring this post back out to the main page.

Hopefully, some newer site members will check this out, and maybe even order it? If I had lots of money, I'd get these guys on a major arena tour, opening for a world famous band. And LFM would "hold their own" every time!

I sent Jeff Langston a FB message a few days ago asking about the possibility of new music.  No response yet.  He might drop me as a friend...

But it really is a good album.  I usually want to take a few songs off of most CD's these days, but I would like a couple more on this disc.  It goes by really fast.