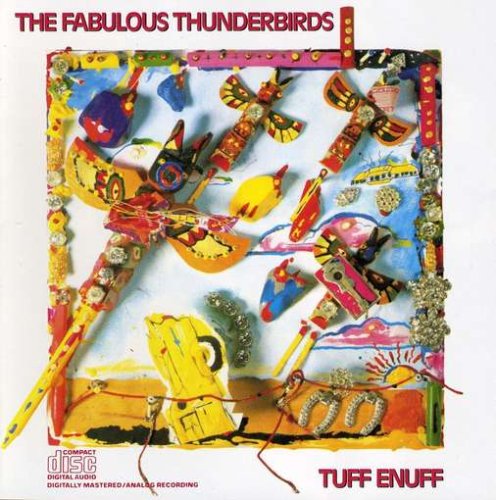 Well, we tackled some Blues Rock last week, let's do the same this week. Tuff Enuff by The Fabulous Thunderbirds is your Album Of The Week.  First, a few nuggets:

That's it, that's all of the nuggets I can find for you.  Let's face it, if you were a radio listener in the mid 80's, you are familiar with Wrap It Up and Tuff Enuff.  Both are excellent songs.  As far as this album goes, I never owned it back then.  I just bought this recently and listened to it for the first time this week.  I'll say...it's okay.  The two hits, like I said before, are fantastic.  Everything else is okay, nothing great.  But I did enjoy Jimmy Vaughan's guitar playing.

What about you?  Do you own the album?  What do you think of it?

I also have never heard this album outside of the 2 radio hits.  I never really liked either of those 2 songs to want to hear anymore from them.  Found their videos annoying as well...  But it wouldn't unprecedented for an album I didn't care about in the 80's turn out to be a fine listen in 2014.

Lucky you, Rjhog. At least he listens to your posts.

I owe you half of Ziltoid still...  I didn't forget

Well, that's good. Too bad it wasn't posted in 2013 like something else.

Like most everyone else, I remember the two hits. Have not heard the rest. It's not bad at all, but just not something I would spin a lot. Kind of like "rock-a-billy" to me, and that whole musical genre is kind of repetitious to me. This certainly has a much bigger blues element than most rock-a-billy, and that makes it better for me.

Not sure a song by song review is worth it at this rate...  This isn't blues, this is Louisiana Cajun backwood rock-a-billy and not very interesting at all.  Why Get Up kinda summarizes this album, its fallen and why get up?  No offense but its just not for me.

Best thing I can say is that it wasn't time wasted, certainly time well spent, but not wasted.  Now a second listen would be time wasted.  Nice variety Boss!

A lot of the songs remind me of Rockpile, which should come as no surprise considering who the producer is. I really don't consider this blues rock, though. It's more like a 50's R&R flashback album, hey, kinda like Rockpile. But rock is based in blues so maybe it is blues rock. But I don't think it is.

There's three songs I heard on the radio and/or MTV, #'s 1, 6 & 3. Song #1 was ok the first time I heard it, but then it got boring fast. The other two aren't that bad, probably because they weren't played as much as #1.

All in all, this really isn't that bad of an album. It would make a nice companion piece to "Seconds Of Pleasure", but that album is so classic, it really doesn't need a companion piece.

Nice pick. Note that I wrote about 100x more in this post than you did for your BusBoys post. Just sayin'.

Your post was so good that I was practically speechless.  I was without speech.  And that is atypical of the stuff you post.