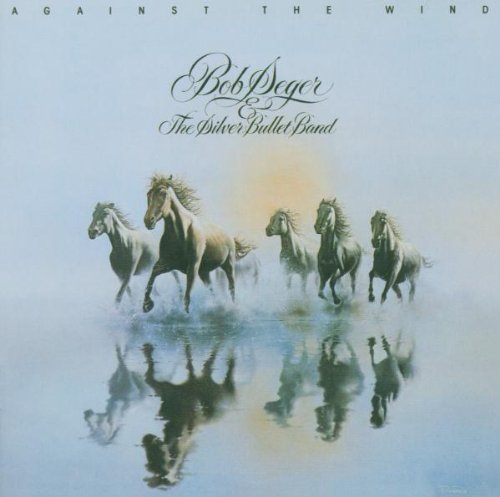 Another week here at CRB, another number one album for your review.  This week we go back to 1980.  Your Album of the Week is Against The Wind by Bob Seger & The Silver Bullet Band.  The album was released in February 1980 and reached the top spot during the week of May 3, 1980.  For six consecutive weeks the album remained at the top.  It sold well, attaining a certification of 6 X Platinum.  There were also four successful singles released from the LP.  Two of those went Top 10 (Against The Wind at number 5 and Fire Lake at number 6).

That should be enough for any album, but here are some more nuggets regarding the album:

My very first album purchase consisted of 2 records, one of which was Night Moves.  And its still a top to bottom classic album.  Because of it I began following this guy and so his next few releases I ran out and bought near their release dates.  I recall some hype for this album and if memory server me correctly (and it usually does) the single "Fire Lake" was released early and was the talk of the radio since The Eagles were guests on the track.  At the time I had no idea he had a history with Glenn Frey, so I thought that was just a cool pairing and the song was/is great!

Have to say that Horizontal Bop (for all the title suggests and the silly jokes we made about it) is still a disappointing opener.  Not terrible, just not a strong track for me.

Now the rest of the album is a totally different story.  The "hit songs" still seem to get some classic rock radio attention.  Especially Her Strut.  "Shining Brightly" is the best non-hit on here. But then I lost track of his work.  The Distance never registered with me and so for years this is where my Seger collection began and ended, Night Moves thru Against The Wind.  A short but very strong 3 album stretch (sans the live album).  I've since added Live Bullet and Beautiful Loser.  Which are freaky good as well.  Would love to see an effort to remaster and re-release his pre-Night Moves albums as I bet some of them are quite strong...

Man, how I hated this album when it came out. And that's not really fair since I hadn't heard the whole album just a couple tracks that were played over and over on the radio, the title track and "You'll Accomp'ny Me". Gee, how I thought those songs absolutely sucked because they were too soft.

The I think I heard "Her Strut" and figured that he wasn't only soft rock. I'm sure I had heard other songs from other albums before, but none of them registered I guess. So, I finally picked up this album and found that it really wasn't too bad.

I think I picked up "Nine Tonight" and then "The Distance" when it came out, didn't like it and that was it for me and BS.

Then, as I've mentioned before, Connie picked up his first greatest hits disc and played it over and over for a year straight and I got really tired of BS. That was awhile ago so I'm not tired of BS any longer.

Anyways, I like this album still and do have it on CD and that's all the BS I have.

Kind of a cool album-cover. My daughter would love it.

Bob Seger's name is wellknown to me, I'm not so sure about his muisc.

The first song is a simple rock'n'roll-song. Something that would be nice listening to live at a bar. I like it, but it's not love.

Second song sounds like american radio-muisc. I can almost picture you, Jeff, listening to this music in your pick up-truck. It reminds me a bit of Mellemcamp, and there was a time, where I was a fan of Mellemcamp.

Third song is back to a bit of rock'n'roll, but it all sounds "too safe" for me, meaning it's okay, but just okay. The riff reminds me of a riff from Foreigners fourth album.

No Man's Land certainly sound like a Mellemcamp-title, for sure. I can almost hear JM singing the song, and it would probably had sounded better, not that Seger is a bad singer, just an ordinary voice imo.

I'm not surprised that some of the Eagles are guests on this album. It's a little more rock'n'roll than your average Eagles-album, but it's easily music you can play wearing a Stetson. Just kiddin'.

The fifth song is a nice little rock'n'roll-song, again I could hear JM doing this song.

"I wanna know, how you ever seen the rain....." oh, I though it was that song starting side 2. Yeah, this also sounds a bit like Creedence. Well, there haven't actually been a bad song yet, but not a great one either.

Oh, seventh song sounds like some gospel, and I hate that. This bores me, so I guess it was the first not very good song imo.

Hey, this is more like it: Rock'n'roll once again, and the fastest rock'n'roll-song so far. Very Jerry Lee Lewis/Little Richard-kind of song. It's very danceable.....but also very, very simple.

Last song starts like a Bruce Springsteen-song, and I can see Stars And Stripes waving in the breeze.

It's...a nice listening, but I'm not really in the mood for this muisc right now. Will I ever be (again)?