Sorry guys. I know I said I intended to add something once or twice a week, but Podsnack was giving me more issues. Let's see if it is up and running this time.

This weeks entry is from BLACK MOSES 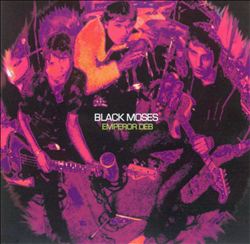 I Kind of forgot about this band, which can be easy to do when you have approx. 10,000 albums loaded onto the external HD's.

I don't know much about this band really. I believe this is their second release and a third album came out a couple years ago and they have disbanded since. The lead singer was involved in a few other notable bands apparently but non I have heard of. Mainly Thee Hipnotics from the early 90's and now he fronts The Jim Jones Revue.

These guys remind me of 2 bands right off the top. Lenny Kravitz and Masters of Reality. I also hear some Danko Jones in there too at times.

They have a good rockin' funky groove with some good guitar and some nice harmonies. Definetely some attitude from these guys.

Well have a listen and enjoy.

First time I ever heard a Fuzz Bass was on Nazareth's Loud N Proud album - The Ballad of Hollis Brown (A Bob Dylan cover if your interested).  Glad to see its finally catching on...

I don't know some of the bands you mentioned but I also hear some STP (a little not much, but it came through to me) and some Wolfmother.

I cant say this was overly captivating, but it had some cool moments, "Blown Away" being one of the best!  Kind of liked that one for some reason...  I'm afraid to ask what Hot Grundies are, so lets leave that one alone.  Seems to be a lot of experimentation in some of these as well, namely in Strange Life with that odd keyboard and the horn section opening the closer, Under The River - didn't expect that.

Not really something I would enjoy beyond this opportunity, but it was an OK listen none-the-less.

This is a decent listen.  It's covered in guitars, which is a good thing.  That third track, Yr Gonna Get It, would have made a fine Foo Fighters track.

Do they not know how to spell you're and your?

I can hear that Danko Jones influence in the track Eye On You.  I'd say this is the best song here.

Thanks for posting Danno

haha, never paid attention to their use of the "Yr" so much. Once is maybe funny, but twice gets kinda stupid unless it is some sort of inside joke.

It has been a couple years since I really listened to this album and I have listened to it a number of times over the past couple days and it is REALLY growing on me. Maybe it is just my mood right now.

I have a TON of stuff I will listen to once and just move on. I also have about 100 DVD's I traded with another collector and there are probably close to 4000 albums on those 100 DVD's and I have listened to maybe 20 of those albums. I don't even know what is on the majority of them. Way too much to get to. Maybe if I abandoned my usual listening pleasures and concentrated on the the the stuff I haven't got to yet.

That's just silly. Listen to the stuff you want. I have a huge pile of stuff now that I haven't listened to and more on the way. In case of the Apocalypse, I'll have music!

This didn't pick up for me until "Blown Away". Nice jazzy intro. The next two songs were catchy with "Won't Let Go" sounding like Jane's Addiction.  "Strange Life" was a bit country, but I still liked it. And then the next song just didn't do anything for me until it picked up a bit and then it lost me again.

20/20 was good, there's some FUNK, BABY! Nice geetaring there. I like the suprts of geetar. Spurting geetar RULES! Cooking up a hambone? That's FUNKY!

The rest was allright I suppose.

I liked 5/12 which isn't too bad I suppose. Not something I'm going to go out an buy, but a good listen.