This review was originally written for the Rock Is Life.com website back in 2005.

The opening song "Joy To The World" has a great rock fine-tuning to it featuring Eddie Van Halen. It's nice to hear a different take on a song and have it come out as good if not better than the original version.

"Greensleeves" has a great sax performance from Edgar Winter (who also does a vocal duet on Winter Wonderland") with a wonderful adventurous feel to it.

The album has 8 cover songs and 2 originals. You can read more about one of the originals below but "Look Out For Angels" was actually pretty good. While I still enjoy Trans-Siberian Orchestra's version of "Angels We Have Heard On Hight" more, I did like Lukather's instrumental version of the song here.

On the song "Jingle Bells" they use a vocal track by the late Sammy Davis Jr. It would be fine if the vocals had actually been fixed up so that I didn't have to turn up the radio simply to hear the vocals at a respectable volume. You would think with all the advances in recording and production technology, they would have the ability to give the listener a good vocal.

The first of two original Xmas songs, "Broken Heart For Christmas" features Slash on guitar. The guitar playing is hot, but the lyrics are rather weak. As Lukather noted in the album notes, it is hard to write an original Christmas song.

While the album isn't destined to be an instant holiday classic, for those listeners tired of the same old thing when it comes to holiday music, it's a pretty decent record. It's great to hear how some of the current great guitarists stretch their musical muscles on these tracks. You can put up your feet, grab a glass of holiday spirits and sit back and enjoy Santamental.

The album is dedicated to the late singer Rosemary Clooney with Steve Lukather calling her his second mom. Lukather's son Trevor handles the power chords on "Carol of The Bells". Gregg Bissonette, who handles all drum tracks on Santamental, has also worked on albums by Joe Satriani, Steve Vai, David Lee Roth and Cheap Trick's Robin Zander. 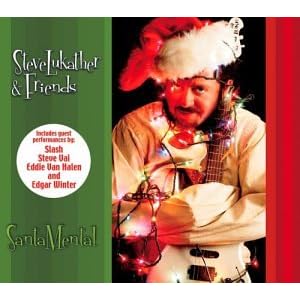 Nice alternative Christmas album, something for when you want to rock out!

And it only took 6 tries to get it posted.