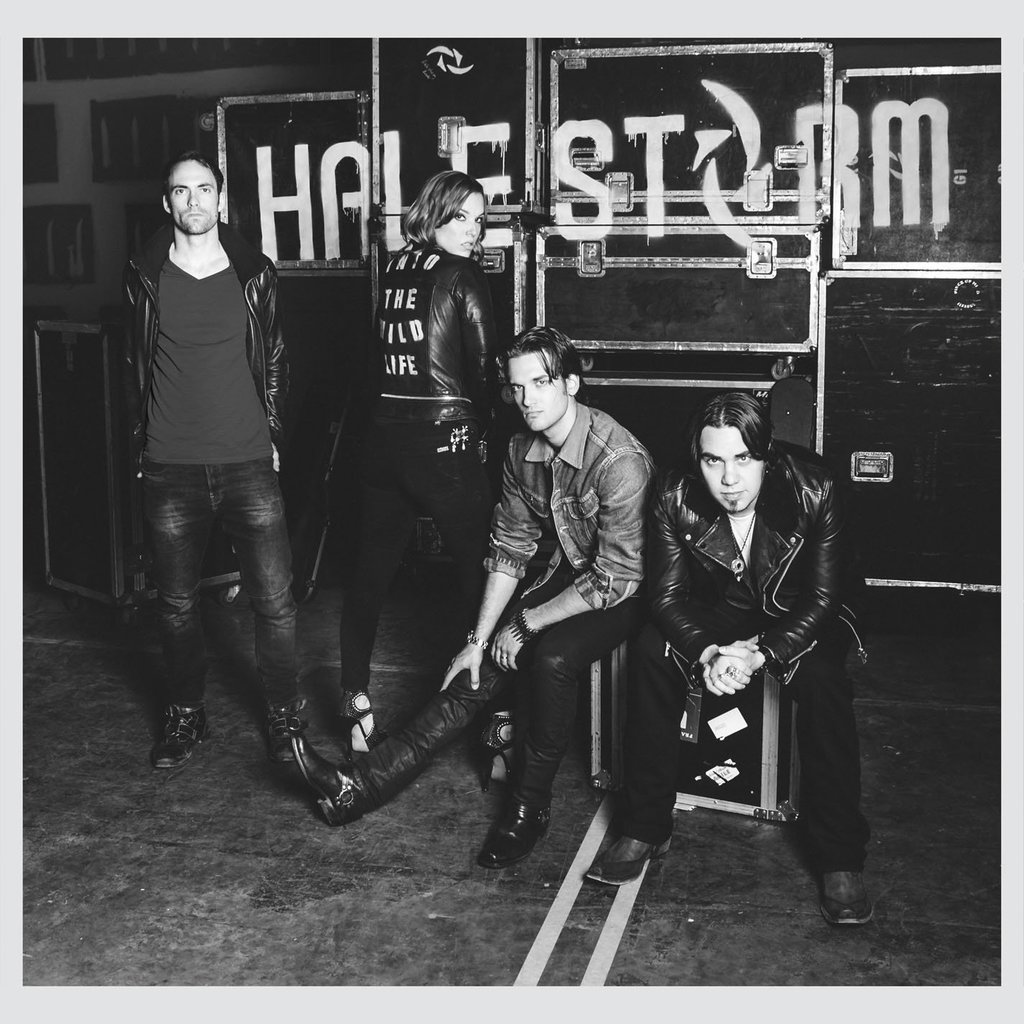 Halestorm is a modern American rock band, fronted by the powerful voice of Lzzy Hale.  The band is from Pennsylvania.  This is the band's third release and I have each of them.  I thought the debut was good, but I just never could get into the sophomore effort.  That fact had already lead to my decision not to pick Into The Wild Life up.  I'm not really sure what changed my mind, but I'm very glad that I did.  The package I have is the deluxe issue, which comes in a digipak with a spindle to attach the CD to and it includes two bonus tracks.   There is a lyric and credits sheet, but it's a fold out poster on one side.  I'm almost fifty years old, I no longer require a poster of the band.  I'd much rather have a booklet, but it is what it is.  That and the fact that the CD runs a bit long with the bonus tracks are the only issues I can find here.

Scream comes at you with a pulsating feel.  I wasn't initially blown away by this song, but it has grown quite nicely for me.  There is a bit of distortion on the vocals, and I'm not a fan of that little production trick, but Lzzy's voice just makes everything okay.  The song doesn't have a formal ending, it moves very nicely into an album favorite of mine, I Am The Fire.  Lzzy's voice takes the main stage.  Her pipes are impeccable.  Sick Individual has a short little drum intro, and the vocals during the chorus mimic the guitar.  This is one of those "I do it my way" anthems, which normally do nothing for me.  But it just fits and Hale is very believable.  Amen follows, and it's another anthem.  Two in a row before it all gets slowed down by the pure pop ballad Dear Daughter. Truthfully, this piano based song sounds like something you'd hear from Pink. The words are strong and the band gets credit for that in my book.  The main body of the song ends with more piano and a sci-fi sound effect.  Once again it just flows into an acoustic guitar interlude with some nice lead guitar, again flowing directly into the rubber band sound of the intro to New Modern Love, another favorite of mine.  Man, Lzzy Hale is one sexy vocalist.

Mayhem is an anthem/party song if I've ever heard one.  It would make a perfect intro for someone in the WWE.  Again the pace slows down for Bad Girls World.  This kind of sounds like another pop song directed at the young ladies.  Nothing wrong with that when it's a terrific song.  Have I mentioned how great Lzzy Hale's vocals are?  One of my favorite moments of the entire album comes at the end of this song.  Over the last minute or so of the track, the background music fades out and Joseph Hottinger gets a moment to shine with a terrific lead guitar piece, which leads directly to another hand raising anthem.  The riff is reminiscent of the Florida State chant from years ago (the one that the Atlanta Braves pilfered).  The Reckoning is a terrific victim/revenge song.  Apocalyptic is predictably about sex.  If I haven't already said it, and I believe I have, Lzzy Hale is very believable.  And the raw sounding lead guitar sounds great here.  There's practically no gap before the cool little keyboard intro to What Sober Couldn't Say.  This is the type of song that made me not care for the previous album, but the song just grows and grows on you.  The original album closes with the name dropping track I Like It Heavy.  This song is made to be played loud.  They name check Lemmy, Led Zeppelin and Black Sabbath.  I can't believe this band played Augusta a year or two ago and I missed it.

The two bonus tracks are pretty good as well.  The first is another song about sex.  Basically a one night stand.  It's not the greatest song in the world, but it's fun and it is included as a bonus. Unapologetic wraps things up.  Yet another song about being a strong woman in today's world.

If you haven't guessed by now, I really like this album.  It flows so well from one song to the next.  They did an excellent job of laying out the tracks in the proper sequence and then by melding them together in many places with little interludes.  For a modern rock band, they get very nice use out of the lead guitar.  You know, that one little piece of a rock band that so many modern bands have forgotten about.  And I just can't say enough about Lzzy Hale's vocal ability.  I personally don't think there is a better female vocalist from top to bottom these days.  Plus she plays guitar and makes you believe these songs are all coming from personal experience.

Nice write up Boss!!  But I don't hear the same thing  This seems cliché and already-been-done to me.  I do see why other may like this though

Everything has already been done.  No one is completely original anymore.

That's why I find myself almost totally engrossed with Steven Wilson and Porcupine Tree.

Appreciate that TR.  One day I'm gonna learn some words other than good, cool and awesome.

So getting you a thesaurus as a Xmas gift is a good idea?