The philosophy around here is that if an idea works once you might as well play it out until its totally dead and buried. Kind of like Jon with Devind Townsend, and RJ with The Smithereens, Tom Petty, Mothers Finest, well you get the idea...


So this week were showcasing a producer who's name everyone should know - unless you dont like Queen - well then you maybe should be on another site...


Baker began his career at Decca Records in England at the age of 14. Encouraged by music producer Gus Dudgeon he soon moved to Trident Studios, where he worked with music producer greats Gus Dudgeon, Tony Visconti, Mick Jagger and Keith Richards, Frank Zappa as well as recording artist The Rolling Stones, David Bowie, The Who, Gasolin', Nazareth, Santana, Mothers of Invention, Be Bop Deluxe, Free and T.Rex.

After co-founding Neptune (Trident's record company), Baker met a band that would eventually be known as Queen. He began a working relationship that lasted for five albums (Queen, Queen II, Sheer Heart Attack, A Night at the Opera and Jazz) and a number of awards – including Grammy Awards and The Guinness World Records for the best single, "Bohemian Rhapsody".

Following his successes with Queen and other artists Baker signed a multi album production deal with CBS Music (Columbia Records, Sony Music, Epic Records, etc.). He then proceeded to move to the US and set up The RTB Audio Visual Productions' Offices in New York and Los Angeles. At this time under his new CBS deal RTB produced Journey, Starcastle, Reggie Knighton (The Grass Roots), Ian Hunter and Ronnie Wood (The Rolling Stones).

Baker, also at this time, committed to produce four albums for The Cars after being prompted by Elektra Records to see them perform in a Boston school gymnasium. The albums were certified platinum and The Cars were Grammy nominated.

He was offered the post as The Senior Vice-President of "Artist and Repertoire" (A and R) for Elektra Records as executive and/or producer with recording artists The World, Lindsey Buckingham, Mötley Crüe, Joe Lynn Turner, Josie Cotton and Dokken as well as continuing with Queen and The Cars. During his tenure as Sr. V.P. Elektra signed artists Metallica, Simply Red, Yello, Peter Schilling, The World and 10,000 Maniacs.

Baker has also worked with artists Guns N' Roses, Alice Cooper, Foreigner, Pilot, Ozzy Osbourne, Devo, The Stranglers, Dusty Springfield, T'Pau, Cheap Trick and Lewis Furey. In 2005 he produced One Way Ticket to Hell and Back by The Darkness, The Smashing Pumpkins' 2007 album, Zeitgeist, The Storm's 2008 album When the Storm Meets the Ground, The Smashing Pumpkins' American Gothic and One Karma's 2011 album Life Got in the Way. He also produced Yes's 2014 album Heaven & Earth, 35 years after his previous experience with the band, working on sessions in Paris that never led to an album.

Gasolin'!!! We all know and love all the great songs, Gasoli'n wrote and Baker produced, right? (around the same time he produced the best Quen-albums, meaning in the mid-seventies). 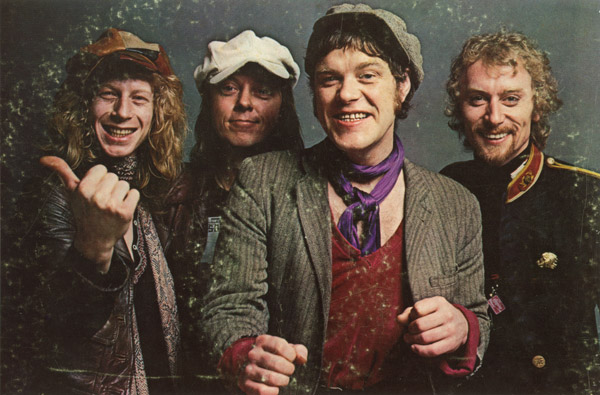 I know what you think, and yeah: We really look that good here in Denmark!

Definitely hear the Yes vibe in the Starcastle. Awesome art work on the cover. The track overall is not for me. The Cars track was typical Cars, and it was pretty good. A little more guitar, and less synth would work for me (as always). On a side note, Elliot Easton was an endorser of Kramer guitars back in the 80's.

I have the Foreigner on vinyl, but I dont really recall this song at all. Best track so far, though, and the chorus is a good one. Dont ever recall hearing this Journey, so Scott's "hidden treasure" theme is apparent in this producer post. Not posting hits is a good move, for sure. But the track is almost half over before I hear any guitar. Maybe Schon had the day off when they recorded the first part? But now the tempo and intensity pick up, and this track just improved a lot for me. Very good organ "lead", before Schon starts smoking. Very pleasant surprise on this track.

Never heard this Queen, either. Not much of a Queen fan as you guys may know, even though I've always said the talent level was immense. I like hearing Freddie Mercury using a somewhat lower register on some of the vocals here. Adds some balls to it. Very good guitar lead from Brian May. He gets some great tones out of that same old guitar he always plays. One of the better Queen songs I've heard, for me.

And now, my Roy Thomas Baker story. Some of you may remember my mentioning a great band in Atlanta in the early 80's, by the name of Riggs. The lead singer, lead guitarist, and main songwriter was all Jerry Riggs. Who would end his own band, and join the Pat Travers Band as Pat Thrall's replacement. He stayed with P.T. for at least 10 years.

Anyway, before Riggs ended the band, they were part of a double album, movie soundtrack, by the name of "Heavy Metal". An animated movie from the early 80's that included a lot of "big name" rock n roll. Black Sabbath, Blue Oyster Cult, Sammy Hagar, Nazareth, Cheap Trick, and Journey. Riggs was one of only two artists to be given two tracks on the double album release. So, it was a big deal, and Riggs was more than just a local band for a while there.

But, the two songs Riggs had on Heavy Metal, were both hard rockers....when heard live. They kicked serious ass. Enter a trip to Miami, and working with Roy Thomas Baker to record these two tracks for the movie soundtrack. Mr. Baker preceded to soften up both tracks, had the band change the chorus and title (only) of one song. The lyrics, outside the chorus, did not change. This track, called "Radar Rider", was once known and played as "Streetwalker". So a song about a "lady of the night" had it's chorus changed, but not its verse lyrics. Kind of made for a strange song, lyrically. The worst part about this whole episode was how two hard rocking, bad ass tracks were made softer, and far less appealing to me by Mr. Baker.

I think without a doubt, the play list here proves that Mr. Baker preferred softer rock, and lots of keyboards. This is neither right nor wrong...it just is. Wrong to me, but no one asked my opinion. So I give it now, over 30 years later.

An insiders view!  Now that was a cool story!  And I recognize the Riggs tunes as soon as you mentioned them being on the Heavy Metal Soundtrack and you're right, I certainly do not remember them being heavy tunes...

Niels, when I was reviewing Bakers production credits I totally took notice of all the Gasolin albums he worked on.  My first thought was you!  I've been through their group page on here and listened and tried to get it.  But while this band eludes my understanding there are very entertaining and some of the music is quite cool.

Starcastle - I like the album cover, did Baker have anything to do with that?  I'm not much of a Yes fan, but this is okay.  Nice guitar.  Saw the vinyl a year or two ago for a buck, should  have picked that up.

Foreigner - See previous remark for The Cars.  Plus, this is my favorite Foreigner album.

Journey - See previous remark for The Cars and Foreigner.  However, I slightly prefer Evolution.  Schon shreds on this track.

Instant update: I listened to Jazz today.  I don't think it's radio friendly at all (other than Fat Bottomed Girls), but I did notice the individual performances.  They are quite remarkable.  Just listen to each musician on the song Dead On Time.  I still wouldn't put the album in my Top 10 for Queen, but I got it much more on this listen than I ever had before

That's DEVIN, not DEVIND. It appears that Scottipedia is as incorrect as Wikipedia.

When I first saw the title, the first band/album that came to mind was Queen's  "Jazz". Very underrated album that gets better and better upon each listen. Don't know why the album would be called "fascist" when it included a posted of nekkid women on bicycles.

Even way back then, "Candy-O" sounded great. However, "Head Games" never really sounded that good on LP or CD. It has always sounded a bit muffled to me but it's one of my favorite Foreigner albums. The Perry/Journey albums sounded better which each album release, with the best sounding being "Escape", at least to my tender ears.

I have a couple Starcastle albums and they're very "light" sounding. Not much bass. Could be that the CD releases are a bit crappy, or maybe that's how they originally wanted to sound.

Jazz is cool!  I don't care what anyone else says...