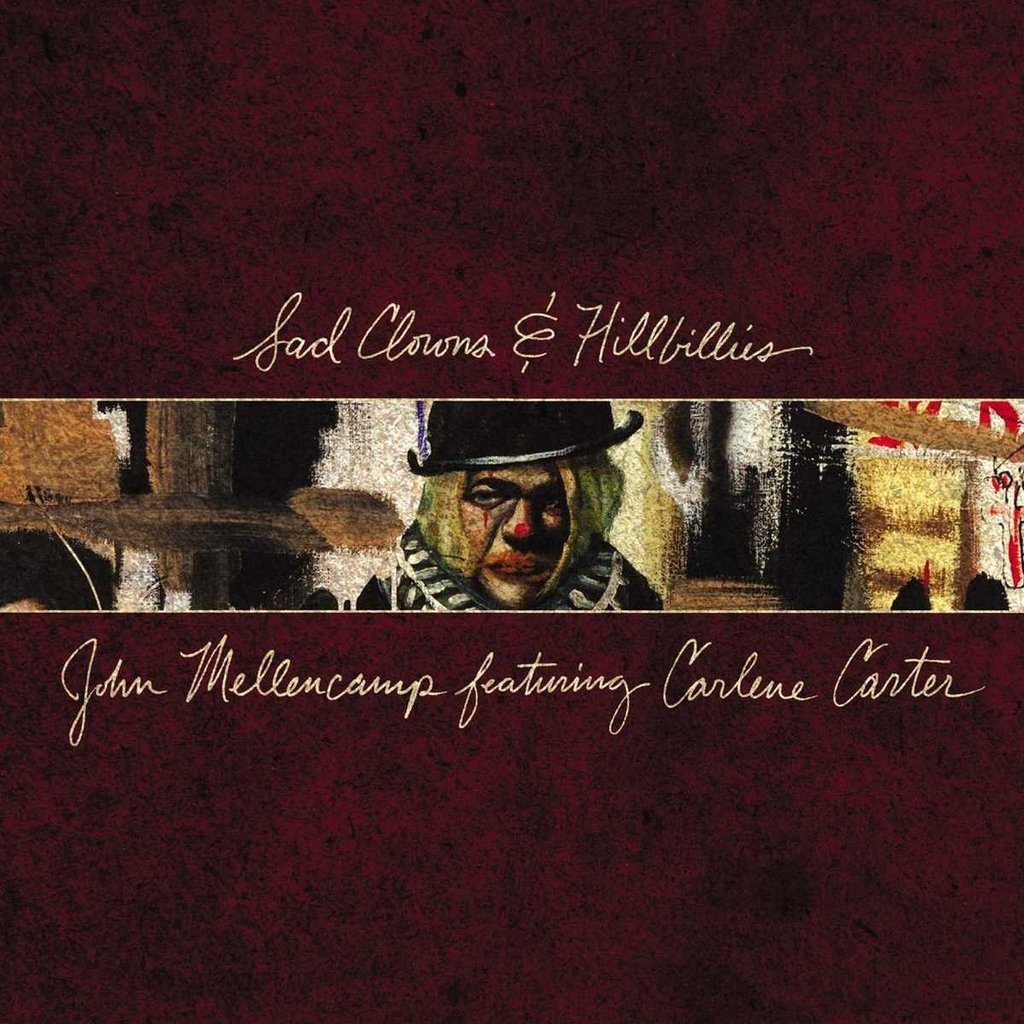 John Mellencamp is back in 2017 with his 23rd studio release, Sad Clowns & Hillbillies.  Right off the bat, I'll say that it doesn't seem that far removed from his previous release Plain Spoken.  However, when I checked out his discography, I noticed that title was released way back in 2014.  I remember liking that release, but not necessarily loving it.  It felt like John was struggling with some of the vocals and everything was in a low key.  It just seemed like his vocals were as close to being spoken as they were to being sung.  I'm not criticizing him for it, as I know as well as any one that the older you get, the harder it is to do the things you did when you were young.  And it's not a singing style that will necessarily turn me off either, because I enjoy that story telling, Americana style.  Anyway, I haven't heard it in a while, so those comments are strictly from memory.

Fast forward to this release.  One of the early singles released, "Grandview", felt like a return to his natural singing voice to me.  I don't think I was overwhelmed when I heard it the first time, but I was totally encouraged that we would hear that full singing, urgent voice that I've always been so fond of from John.

With all that said, let me get right to my review.  First, I have a criticism.  The packaging is about as spare as it comes.  You simply get a cardboard sleeve and a disc.  That's it.  My assumption is, with the state of rock music releases as it is today, Mellencamp just doesn't see the advantage to adding more descriptive credits or a lyric booklet.  It's probably an unjustified additional cost.  Fair enough.  But as a paying customer, I'd like to see those things added. The credits are all squeezed onto the back of the cardboard sleeve.  Of course, it's small print, but with my reading glasses and some good room lighting, I can see the recognizable names Izzy Stradlin (guitars), Kenny Aronoff (drums), Stan Lynch (drums), Martina McBride (featured vocals) and Christie Brinkley (background vocals).  Other than what is listed here, there is no indication of which songs these folks are featured on.  The lyrics are available on Mellencamp's website, and thank goodness for Wikipedia.

Carlene Carter's name is featured as a billable act on the cover.  Her and John started writing and singing together on some previous releases, so this was originally billed as a duets release.  It really isn't, but Carter is responsible as the sole writer on one track (Damascus Road) and a co-writer on Indigo Sunset, as well as being a featured vocalist on several of the albums songs.

Mobile Blue - The album kicks off with a distinct country design.  Mellencamp's voice is old and scratchy, but it fits this song perfectly.  But he does pick up the singing in parts, and Carter's backing vocals are just the right touch. It's an excellent, mostly laid back, album opener.  By the way, it's one of two covers on the album.

Battle of Angels - The fiddle makes this one feel more country than rock as well, with Carter's backing vocals again being a nice touch.  Two for two.

Grandview - This is the track I referred to early.  This is laid back rock and roll if you ask me.  Mellencamp sounds fantastic on this song.  Martina McBride just sets an already terrific song on fire!  It's not a huge part, but it has a lot of positive impact.  The little bass breakdown, followed by some heavy snare work brings the song full circle as Mellencamp sings it out.  Best song so far.

Indigo Sunset - Carlene Carter kicks off Indigo Sunset.  What we have here is more of a ballad than anything else. Carter's beautiful, smooth voice plays very, very well off of the roughness of Mellencamp's voice.  This is one of Carter's co-writes.

What Kind of Man Am I - A very nice, solitary acoustic guitar sets the tone for this track.  "My words don't know the truth, they flutter as I speak/The sickness I feel under my belt, is the disdain I have for me".  What a lyrical masterpiece this is.  And the accompaniment gives it the perfect atmosphere.  Great vocals from Carter as well as Christie Brinkley and a couple of other ladies put this song on par with Grandview.  Not a single dud so far.

All Night Talk Radio - It's amazing to me how a song can specifically resemble so closely what the artist is singing about.  That's what this tune does.  Trust me, this album is in a killer groove at this point.  It has to be his best offering in years.

Sugar Hill Mountain - But you just knew the goodness couldn't be perpetuated for thirteen straight songs.  This song isn't bad at all, but it's hokey.  Really, the first track that I can do without.

You Are Blind - I'm a bit on the fence for this song.  There isn't really a chorus, at least that I can find.  It may be a grower, just not sure yet.

Early Bird Cafe - I get a slight feel of R.E.M. from some of the guitar work on this song. "Someone asked me what time it was and I told him it was now".  I like that line.  The organ is pretty thick here as well.  Another good track for me.  "You know it's hard to be alive sometimes, but it's easy to be dead".  This is killer stuff.

Sad Clowns - This is the eleventh track, and I just can't get enough.  Sad Clowns is another song that just begs for you to listen to the lyrics.  And it's just got that Roy Acuff type beat that fits the song so well.

My Soul's Got Wings - At first listen, I thought this song would turn me off.  It sounds like an old gospel standard that you would hear in a deep country church.  But my goodness, it's so catchy.  And maybe, just maybe I like it because it makes me feel like I'm sitting in that country church.  Both artists take a verse and sing the chorus together.  Besides, Christie Brinkley helps out with the handclaps, what in the heck could there be to not like?

As you can see, this album is a big, big winner for me (other than the packaging).  There's really only one song that completely does not work for me, while everything else is just a terrific listening experience.  I am very psyched that an artist like John Mellencamp can put a product like this on the market so late into his career.  Truthfully, I can't wait to hear it again.

It's a pretty good album. In fact, I think it's Mellencamp's best since Human Wheels. But it could had been better. The last 3 songs are not very good. And that's a mistake. Always close the album with a great song or two, or the whole album will seem less good than it is.

The one standout of this:

Billy Joel is probably fuming over this even though it was a long time ago.

Clark Griswold is probably still upset that the pool was so damn cold.

Yes, that is Christie Brinkley at 63 years of age in this year's Sports Illustrated Swimsuit Issue with her two daughters.

The only Mellencamp I ever owned was the Scarecrow on vinyl. Who knows where it is now. I really liked it. Wore the grooves flat on that album, but never really cared for his other stuff enough to buy them. Not sure this one will do it for me either, (I should hear more songs) but dang, that Easy Target has a great Leonard Cohen feel to it. Really digging that one. Are the rest of the songs on this album like that last song or are they more like the Grandview?

For me, Grandview and All Night Talk Radio have a similar vibe.  Not sure that any of the others really sound like Easy Target, but the album does in some places.

Made an effort to listen to the whole album, on the strength of that last song.

Well, I was on the skip button more often than not.

'Easy Target' is a great tune, 'What Kind Of A Man Am I' is admirable, however to my ears the rest is no better than anything a street performers in a two block radius can do. Very vapid fare. If he was starting his career now and took this material to a record company, I doubt he would have gotten a deal.

It obviously struck a cord with you and that's all that matters, but for me Scarecrow is still the album I shouldn't have lost over the years of extensive moving.

I certainly agree with you on Scarecrow, it has always been my favorite of his.

Appreciate you reading the review and taking a chance.  That's what it's all about.  Sometimes you find a gem, sometimes a dud.