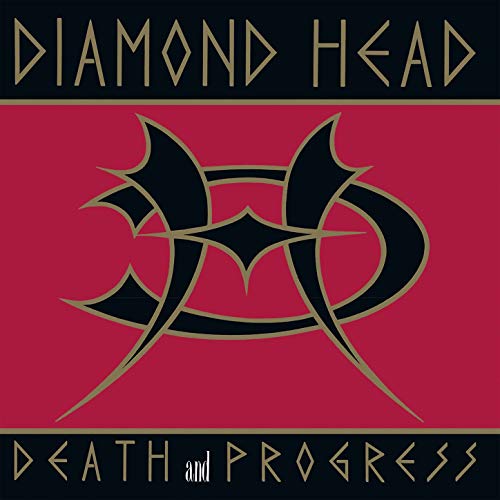 Despite showing great promise with their awesome debut Lightning to the Nations, New Wave of British Heavy Metal stars Diamond Head apparently "lost the plot", as they say in England, changing direction and churning out a couple of mediocre albums before fading into apparent obscurity. Luckily, their sound influenced many bands and their legend kept increasing after the band had broken up, eventually prompting them into a reunion. 1993's Death & Progress seems to fulfill what Diamond Head failed to achieve ten years earlier: Combine their heavy metal roots and aggression with a more concise, if slightly commercial style of songwriting, resulting in what can be loosely defined as a melodic hard rock album. Nowhere is this new-found balance more apparent and effective than in "Starcrossed (Lovers of the Night)," which opens with a gorgeous melody before climaxing in a virtual thrash-out. Other stand-outs include "Damnation Street" and "Truckin'," while "Run" is simply a phenomenal hard rock single and serves as a great conclusion (?) to an interesting career.

I started this but don't have time to finish it tonight.  I'll have to do so tomorrow.  But he really sounds like John Sykes on that third track...

Oh, yes, the singer.  Maybe not quite as good, but just really reminds me of Sykes on the Blue Murder album.

Finished this up this morning.  Just too tired last night to finish.

It's pretty good.  I hear some good guitar playing.  And as stated above, the singer reminds me a bit of John Sykes, but Sykes voice is a bit stronger and smoother to me.  Still good though.

Overall this is decent.  I have the box set that has their early stuff on it but I still haven't really spent any time listening to it.  Maybe one of these days.

Oh, and for some reason, at the 3:44 mark of the next to last track, the player keeps freezing.  I backed it up and it did the same thing every time.  I finally had to skip forward about 20 seconds and the rest played fine.

I think I have this. Let me check the "Later" pile.

Yep, I do and it's the Japanese Version, which makes no sense since looking at the back it has the same track listing as what Jon posted here. It was either the same price as the regular edition or a gift. I can't remember where and when I got it.

Oops, nevermind. It does have a Bonus Track, that is only listed in the booklet. These Japanese... They do that sometimes, so it might be my own purchase, after all. Still can't remember when, though.

Eh, who cares. I'll listen to my CD later (when it's time) for now I'll spin Jon's playlist.
I can't say I heard these boys before. Of course, I know who they are, but not a single song comes to my mind.

Well, this is not NWOBHM, but it ain't bad. More of a Hard Rock than anything else, in what they do pretty good job all around. "Wild On The Streets" was the best.
Nice post.

You need to listen to Lightning To The Nations which can be found here! Definitely NWOBHM and I'm sure you've heard Am I Evil. .

Now that you mentioned it, I have heard Am I Evil.

Was that covered by Metallica?

Yeah, it's on their Garage Inc. album.

It makes sense. I have that CD.

I also put Borrowed Time on my wishlist.
Always liked that Rodney Matthews cover.
Next time I'm shopping, I'll pick it up.