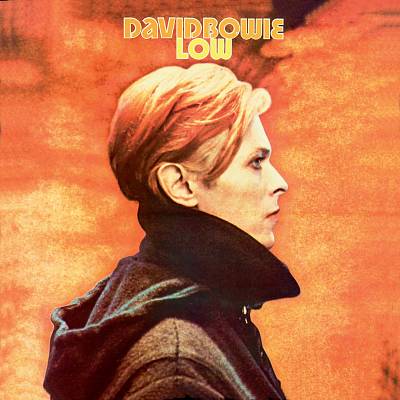 In remembrance of David Bowie, this week we're going to feature not one, but two Bowie albums which happen to be albums 10 & 11 in the series I thought up all by myself.

First up is Low from 1977 and it's the followup to the gold certified Station To Station which reached #3 on the US charts and included the top ten single, "Golden Years".  That was the third gold certified album in a row, following Young Americans and Diamond Dogs.

There were two singles released from Low, "Sound And Vision", which reached #69 on the US charts, and "Be My Wife" which did not chart.

Low is the first album in the "Berlin Trilogy" and the first collaboration with Brian Eno. They would follow up this album with 1977's Heroes and 1979's Lodger.

What's fascinating about this album is that it's not an easily accessible album, especially with only one listen. With the exception of "Sound And Vision" there's nothing on the album that is radio-friendly which comes as a bit of surprise considering the previous albums listed above.

The first side is mostly songs with vocals while the second side is mostly instrumental. Definitely experimental music and not something for those expecting a continuation of his previous albums.

Following through with the avant-garde inclinations of Station to Station, yet explicitly breaking with David Bowie's past, Low is a dense, challenging album that confirmed his place at rock's cutting edge. Driven by dissonant synthesizers and electronics, Low is divided between brief, angular songs and atmospheric instrumentals. Throughout the record's first half, the guitars are jagged and the synthesizers drone with a menacing robotic pulse, while Bowie's vocals are unnaturally layered and overdubbed. During the instrumental half, the electronics turn cool, which is a relief after the intensity of the preceding avant pop. Half the credit for Low's success goes to Brian Eno, who explored similar ambient territory on his own releases. Eno functioned as a conduit for Bowie's ideas, and in turn Bowie made the experimentalism of not only Eno but of the German synth group Kraftwerk and the post-punk group Wire respectable, if not quite mainstream. Though a handful of the vocal pieces on Low are accessible -- "Sound and Vision" has a shimmering guitar hook, and "Be My Wife" subverts soul structure in a surprisingly catchy fashion -- the record is defiantly experimental and dense with detail, providing a new direction for the avant-garde in rock & roll. 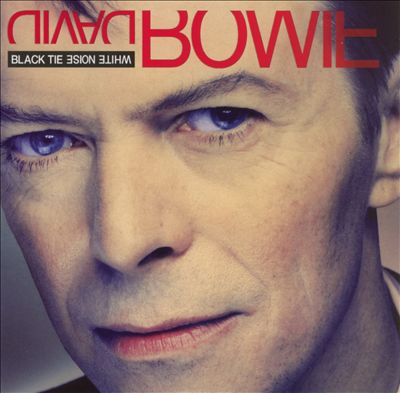 Black Tie White Noise is the 1993 release from David Bowie and was his first album since 1987's Never Let Me Down. Between those two albums he was in Tin Machine, who released two albums. For this series, I'm not counting those two albums since they're not really considered "David Bowie albums".

Never Let Me Down was certified gold while the two albums that came before that, Tonight and Let's Dance, were both certified platinum.

Black Tie White Noise reached #39 on the US charts and the single, "Jump They Say", reached #4 on the US Modern Rock chart. However, no singles reached the US Hot 100 chart.

The album was co-produced by Nile Rogers who had previously worked with Bowie on the Let's Dance album and also featured the return of Mick Ronson who would pass away later in 1993.

Compared to Low, this is a much more accessible album but some might not find it 100% accessible. Except for a few David Bowie albums, that's just the way he rolled.

Black Tie White Noise was the beginning of David Bowie's return from the wilderness of post-Let's Dance, the first indication that he was regaining his creative spark. To say as much suggests that it's a bit of a lost classic, when it's rather a sporadically intriguing transitional album, finding Bowie balancing the commercial dance-rock of Let's Dance with artier inclinations from his Berlin period, all the while trying to draw on the past by working with former Spider from Mars guitarist Mick Ronson, collaborating with Let's Dance producer Nile Rodgers, and even covering inspiration Scott Walker's "Nite Flights." On top of that, the record was inspired by his recent marriage to supermodel Iman -- the record is bookended with "The Wedding" and "The Wedding Song" -- and then tied up and presented as a sophisticated modern urban soul record, one that draws from uptown soul (including, rather bafflingly, a duet with Al B. Sure!) and state-of-the-art dance-club techno, while adding splashy touches like solos from avant jazz trumpeter Lester Bowie and a nod to modern alt-rock via a nifty cover of Morrissey's "I Know It's Gonna Happen Someday." That's a lot of stuff for one record to handle, so it shouldn't come as a great surprise that the album doesn't always work, but its stylish restlessness comes as a great relief, particularly when compared to the hermetically sealed previous solo Bowie record, 1987's Never Let Me Down. Black Tie White Noise displays greater musical ambition than any record he'd made since Scary Monsters, and while much of the record feels like unrealized ideas, there are songs where it all gels, like on the paranoid jumble of "Jump They Say," the aforementioned covers, the impassioned "You've Been Around," and the self-consciously smooth title track. Moments like these are the first in a long time to feel classically Bowie, and they point ahead toward the more interesting records he made in the second half of the '90s, but they are encased in a production that not only sounds dated years later, but sounded dated upon its release in the spring of 1993, two years into the thick of alternative rock. At that point, the club-centric, mainstream-courting Black Tie White Noise seemed as an anachronism during the guitar-heavy grunge-n-industrial glory days -- something Bowie tacitly acknowledged with its 1995 successor, Outside, which was every bit as gloomy as a Nine Inch Nails record -- but separated from the vagaries of fashion, it's an interesting first step in Bowie's creative revival.

Along with his last two releases and the two albums featured here, I highly recommend the following for those interested in discovering David Bowie. They are not in any particular order.

1. The Man Who Sold The World

2. Ziggy Stardust And The Spiders From Mars

Permalink Reply by RJhog (Admin) on January 15, 2016 at 10:51am
What are your initial impressions of Blackstar? I'm guessing you like it from the article.

I really do like it, it's quite mellow but it's a wonderful companion to "The Next Day".

I think that I'll get The Next Day too.  I was really surprised by how much I like the title track to Blackstar. And I really liked the song that Niels posted in this week's VOTW that comes from The Next Day.

Nice write up and tribute!

I want to be respectful to a deceased artist whose influences loom large.  But I have to admit, I'm just not a fan.  There are moments here where I get transported back into the big dark arcade room in the local mall, I hear electronics from that era ringing in my ears.  But mostly I hear full on artistic experimentation, though I'm not sure that's the intent of Bowie - I wouldn't have a better sense of what this is supposed to be.  Very keyboard heavy and the songs feel very loose.   But I will say the bass work is by far the most enjoyable aspect to this album.  I am disappointed in the vocals and vocal harmonies.  Be My Wife is great example, just not enjoyable at all.  The full side of instrumentals (except for Warszawa, and I have no idea what those vocals were meant to be) didn't really work either. RIP Mr Bowie, I pray you really do, but as a listener of this album,  I just don't get it...

Low - Yep, definitely not mainstream.  Can't find much in the way of hits on the album, but from what I understand, Bowie could be very experimental.

There's quite a few short songs and/or instrumentals, so there is that.  But the album just sort of muddled along until track 6, Be My Wife.  That was a pretty cool song.  The guitar was nice, and I also liked the repeating piano riff.

Then Warszawa sounded like a them song of some sort from a movie.  I liked it.

As a matter of fact, everything from there on out sounds like a soundtrack. It's actually quite enjoyable for a lazy Sunday afternoon.

Black Tie White Noise - Definitely sounds more accessible right off the bat.  You've Been Around is an interesting track. There is some funk present.  I didn't really pay much attention to the bass work on the other album, but it catches my attention hear, probably due to it's funkiness.  I Feel Free keeps up the thematic approach.  As does the title track. Have I mentioned the funkiness yet.  And the title track is very soulful.  I'm very surprised if this was not a hit for the R&B genre.

It pretty well continues this way throughout the rest of the album.  Definitely strong bass guitar presence.  Also a strong saxophone presence.  I didn't realize he had this much sax on his records.  I do like it, I think it adds to the music for sure. I also like his double tracked vocals when they are present.  I use to think that wasn't a good idea, but when two voices harmonize, it is just a thing of beauty.  Who am I to say that it can't be the same person doing it?

The first half is a bit more funky I think, but I do like the last two slow songs.

Really good post Jon.  I haven't been a Bowie fan, other than the hits, in the past, but I'm getting a bit of a fever for checking out his work.  Barnes & Noble has several of his albums, at least a couple that you recommend, for 6.99.  About to spend at least 25 bucks there, maybe not all Bowie, but The Rise and Fall of Ziggy Stardust, Space Oddity and The Next Day for sure.

I'd say the second album here is definitely better overall than the first.

It's Bowie on sax.

I had no idea.

Accessible yes, better?  Not so sure.  Its commercialism isn't really appealing, especially considering the 1993 musical climate.  Sounds more geared towards the club scene.  One thing I will say is that cool bass lines are consistent in his writing.  Foundationally strong, but becomes repetitive and the vocals feel flat over and over as well.  Still not a Bowie convert...