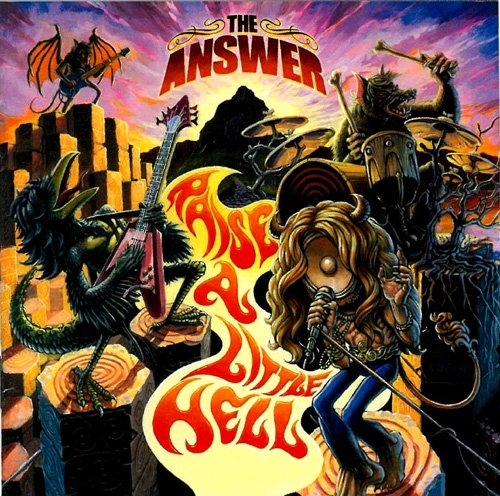 The Answer are a Northern Irish hard rock and blues rock band.  At one time, I seem to remember them being hailed as the next AC/DC.  I'm not sure that it ever panned out that way, but they are a dang fine band none the less.  Raise A Little Hell is their fifth studio release.  I have three of the five.  To me, their sophomore outing was excellent, but the follow up just didn't have the same punch.  So I skipped their next release, but opted back in with this current album.  And I'm quite glad I did.

I won't go song to song like I do sometimes, but let me say I really like this record.  It has all the riffs, soaring choruses, gravely vocals and fancy geetaring one could want.  I would have to say that eight of the twelve songs on the CD are in the "very good" range.  From the anthemic opener to the Nazareth"esque" The Other Side, this album is tight.  Songs like Aristocrat, I Am What I Am and Whiplash are bombastic and muscular.  While the razor tough band also shines on a couple of more easy going tracks, Cigarettes & Regret and Strange Kinda' Nothing.  I will say that I wasn't an immediate fan of Red, but that track has totally grown on me and is firmly in the awesome section of the album.

With all of the goodness of the tracks mentioned above, it's not a perfect album.  Last Days Of Summer is actually a good track overall, but there is some distortion present and I'm not a fan of that usually.  Gone Too Long, I Am Cured and Raise A Little Hell are songs that fell a little flat for me.  I'm not saying they are bad or difficult to listen to, they just didn't have the same pop that the others had.  And that in itself doesn't have much of an effect on the overall score, because there are very few perfect albums in this world.

There are two versions of the album available.  There is a standard album, which is what I am reviewing here, and there is a two CD deluxe version, with six bonus tracks on the second disc.  I certainly wish I would have grabbed the deluxe, but you can't win 'em all.  I failed to mention earlier that the CD comes in a jewel case, complete with a booklet containing the lyrics and credits.  The lyric font could be a little larger.  It's not hard to read when there is a light background, but it's much more difficult to read with a dark or busy background.  If you are by chance wondering, this album does come highly recommended by myself, but only if you love good hard rock music.

I think I remember reading something about this band in Classic Rock magazine, but I haven't listened to the band before. I'll have to add this to my list to check out.

I originally said in the review above that this song fell a little flat for me, but I've changed my mind.  I like it too!

Really solid album!  Love Strange Kinda Nothing, its my favorite track.  Pretty much a guaranteed top ten appearance this year for me