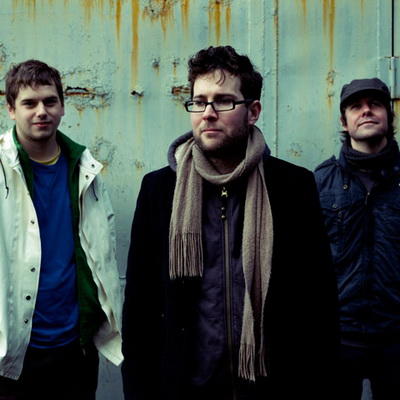 Another european electronic "Neo-Prog" (isn't it called that?)-band (especially for Scott), that I've become a fan of in the recent years. I don't espect them to get many fans around here (Scott?), though. Wiki: North Atlantic Oscillation is a post-progressive rock ( aha!) and electronica band from Edinburgh, Scotland. They are signed to the Kscope record label and released their debut album Grappling Hooks on 22 March 2010. The band currently consists of Sam Healy (lead vocals, guitars, keyboards), Ben Martin (drums, programming) and Chris Howard (bass, bass synth, backing vocals). The band was initially formed in 2005 by Healy, who had played in several bands previously, and Martin, who had moved from the English Midlands to Edinburgh to study. The duo later expanded to a three piece when they added Bill Walsh to the live line-up. After Walsh left at the end of 2009 he was replaced by Howard, although Walsh still appears on-stage with the band from time to time on guitars and additional keyboards, and has produced several remixes for the band.The band are named after the North Atlantic Oscillation, a fluctuating change in the atmospheric pressure differential that exists between the Icelandic Low and Azores High.In November 2009 the band released an EP titled Callsigns EP. As well as containing their own song "Cell Count", it also featured a remix by Engineers (also signed to Kscope) and a cover of "I Only Have Eyes For You", a song made popular by the American doo-wop group The Flamingos during the 1950s. During 2008, financed by Healy, the band recorded and mixed their debut album Grappling Hooks which was released on 22 March 2010 on the Kscope record label. It has received largely positive reviews from critics including the NME and Uncut magazine. Clash described the album as, "a near-criminal stockpile of beeps, buzzes and glitches generously sprayed over a spacious psychedelic rock canvas". However, some critics offered negative views. This included Drowned in Sound who criticised the record for failing to, "hit the heights it aims for". Nevertheless, during the week of its release it was featured as 'Album of the Week' on Zane Lowe's popular BBC Radio 1 evening show. Lowe himself described the music as, "super exciting new Rock n Roll for a new decade".Their music has been compared to contemporary American bands such as Grandaddy and The Flaming Lips, Scottish bands such as The Beta Band, and 70s prog-rock band Pink Floyd. Their music combines elements of electronic beats with alt-rock guitars and "hazy vocals".In 2013 Healy released a solo album under the name 'Sand', also on Kscope Music. In August 2014, North Atlantic Oscillation announced their third studio album 'The Third Day'. The album was released on 6 October 2014 via Kscope.

Video for 77 Hours by North Atlantic Oscillation, from the album Grappling Hooks (2010)

Drawing Maps from Memory, taken from debut album, Grappling Hooks, on Kscope.After a busy and exciting 2009, releasing their debut EP and playing shows with the likes of Porcupine Tree, Explosions in the Sky and Cymbals Eat Guitars, North Atlantic Oscillations debut album, Grappling Hooks, is released on March 22nd on Kscope.The band have been described as prog-pop and electro-rock, but really they just make music. The music has soaring harmonies and loud guitars and dreamy synths and heavy drums and strange effects and unexpected changes-of-mind.NAO are the Scottish based trio of Sam Healy (vocals, guitar, bass, keyboards, synths, sax, percussion), Ben Martin (drums, percussion, programming) and Bill Walsh (bass, synth bass, vocals). They describe themselves as playing their instruments within a computerised wall of sound.Grappling Hooks is a subtle yet powerful kaleidoscope of purring electronics, atmospheric layers and hook-laden melodies. Preceded by single Drawing Maps from Memory, out on March 8th, the album proves that the praise that was heaped upon Callsigns EP was entirely justified.It sounds nothing like you expect it to. But then thats exactly what makes North Atlantic Oscillation so beguiling, intriguing and fascinating theres a surprise around every corner.

Also from "Fog Electric". Not much information on wiki about these releases.

From their latest album from 2014. Actually the best track on the album was an instrumental track. But this is my second-favorite. I hope, there's a new album on the way.

Sam Healy has another band, or perhaps it's mostly solo, called "Sand" that have just released a new album called "A Sleeper, Just Awake". That could easily had been a new NAO-album, because it sounds almost like them. Another album, that might just enter my top 10 of the year. I've heard it twice now, but I need a few more times.

77 HOURS … Didn’t take long for this to fade into the background, the music is not engaging at all and uninteresting to me, the last few minutes of which was just a noise.  This from a former prog band?

DRAWING MAPS FROM MEMORY …  When we moved to North Carolina from Idaho my son drew a map for my mother, it was an outline of the United States with two states drawn in, Idaho and North Carolina.  He drew a line from the place we lived back west to the place we live now and subtitled the drawing “How to get to me”.   Still one of my favorite memories and my mother still has it on her fridge, 18 years later.  Thought that story was more interesting than the song about drawing it…

I've put a link on the bands FB-site, and they've "approved", just sayin'.

I'm having my doubts about this one...

77 Hours - ...is how long this song lasted.  I'm not into electronic music.  I don't mind some electronics being used within a song, but I don't care for songs being built only by use of electronics.  The bass pattern isn't too bad here, and there appears to be some guitar work.  The drummer, if it's a real drummer, is working pretty hard.  The song seems to descend into chaos until if finally ends.

Drawing Maps - You can definitely hear the atmospheric sound of the production, just as it describes in the write up. The song is boring though.  Sometimes I enjoy using Niels' own words...

The Receiver - I like good harmonies, you know that.  This live version disappoints in that category, at least at the beginning.  But it could just be the quality of the recording, I do understand that.  I see why you like the band, the big video screen in the back.  Music appears to be quite visual to you, and I guess it can be to me as well.

Soft Led Zeppelin Album Title - I hate to be negative, but this music puts me right to sleep.  Matter of fact, I just woke up.

This is certainly music, and it takes all kinds to make the world go around.  But if I had to listen to this on a regular basis, I probably would stop listening to music altogether.  Sorry Niels, this just isn't my style at all.

Don't be sorry. It IS just music. I seem to be getting more and more in to the kind of music, I (in my own terms) had developed my music-taste "to", before I stubbled on to the Classic Rock-page, that eventually let to this one, these days, since I feel (here it comes again) bored, listening to for example Kyng and Alter Bridge, but like the new albums from the frontman of this band (Sam Healy), but also new albums by Bon Iver and even Kings Of Leon.

But it seems like Scott did fall asleep after only two video's.