VIDEO'S OF THE WEEK: PJ HARVEY 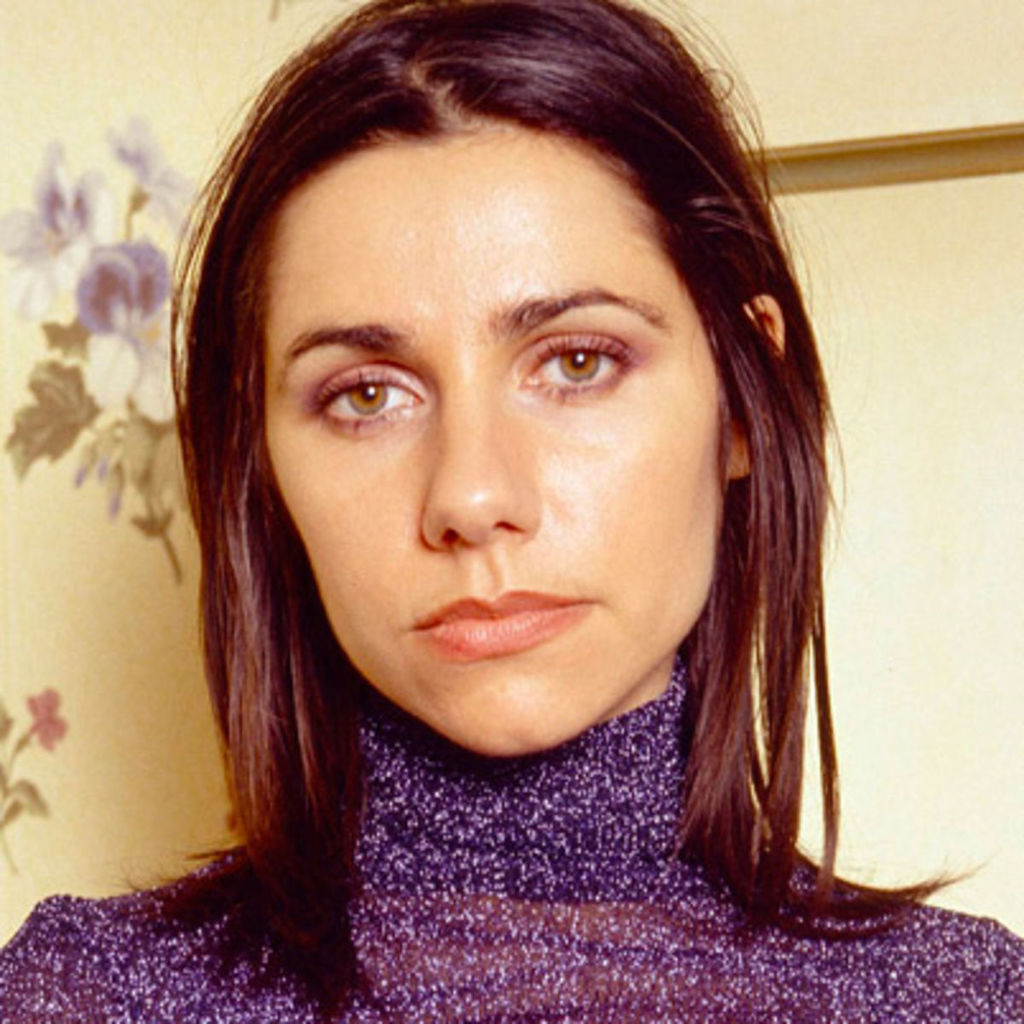 If Jeff can post all these pop-albums and songs, I can't see why I cant post this PJ Harvey-VOTW. Not that Harvey is pop as such, but I wouldn't call it Classic Rock either. More like Alternative rock, whatever that is. Those who really knows me, knows that it's not THAT many female musicians, that impresses me in to being a fan or whatever to call it. Actually I only think there are two, that I would call music geniuses, and that's Kate Bush and PJ Harvey. Now, since I've already posted a Kate Bush-VOTW, it's about time to post a PJ Harvey-VOTW, and there's another good reason for that, namly a new album released 15th of April, I think it is.I noticed Harvey back in the mid-90's, but didn't buy an album, until I bought one for my wife in 1999. We were supposed to had seen a PJ Harvey-concert in 2000, but the concert was cancelled, and I haven't noticed Harvey being near Denmark since then. After buying, and really liking "Strories From The City, Stories From The Sea" in 2000, I also bought her next album "Uh Huh Her" in 2004, but I wasn't that impressed by that album. It wasn't bad, though, but I did sort of forget about Harvey until 2011, where "Let England Shake" was released in Jan/Feb. It took me 10 or 11 months to actually listen to the album, and when I did, it really surprised me how good it was/is. It ended up on my Top 10 in 2011, and it's one of those albums, that I/you still listen to 5 years later, and it goes without saying, my favorite PJ Harvey-album. I'm really looking forward to her new album, released Friday, next week. And yes, I think she's sexy.

DOWN BY THE WATER

"Down by the Water" is a song by English alternative rock musician PJ Harvey. It is the seventh track and lead single from her third studio album To Bring You My Love, released in February 1995 on Island Records. The song was written by Harvey and self-produced with Flood and John Parish.The song diverged significantly from Harvey's former indie rock and punk blues influence, opting to use electronic instruments such as a synthesized organ and an orchestral ensemble. "Down by the Water"'s lyrics narrate the tale of a woman drowning her daughter and references the traditional American folk song "Salty Dog Blues.""Down by the Water" was Harvey's mainstream breakthrough in the United States, where the song reached number 2 on Billboard's Modern Rock Tracks chart and received extensive rotation on MTV and college radio stations. The song received critical acclaim upon its release, charting in Canada, Ireland, the United Kingdom and the United States.

A Perfect Day Elise" is a song by English alternative rock musician PJ Harvey. Written solely by Harvey, the song was released as the lead single from her fourth studio album, Is This Desire? (1998), on 14 September 1998 through Island Records. The song became Harvey's highest charting single in the United Kingdom, peaking at number 25. An accompanying music video for the song, directed by Harvey's frequent collaborator Maria Mochnacz, was released in 1998.

Good Fortune is a song by English alternative rock musician PJ Harvey. It is the second track and lead single from her fifth studio album Stories from the City, Stories from the Sea, and was released on 13 November 2000 on Island Records. The song was written by Harvey and self-produced with Mick Harvey and Rob Ellis.Upon its release, "Good Fortune" received positive critical acclaim and charted in both France and the United Kingdom, peaking at number 100 and number 41 respectively. The song had an accompanying music video, directed by Sophie Muller.

"This Is Love" is a song by English alternative rock musician PJ Harvey. It is the tenth track from her fifth studio album, Stories from the City, Stories from the Sea (2000) and was released as a single on 8 October 2001 under the title "This Is Love/You Said Something". It charted on UK Singles Chart, peaking at number 41. The blues-influenced song was nominated for the Grammy Award for Best Female Rock Vocal Performance in 2002 but lost to Lucinda Williams song "Get Right With God".

I love this song! I understand why some people don't understand why, but I love it. I love the whole album. "The Glorious Land" is a song by the English alternative rock musician PJ Harvey. The song was released as the second single from her eighth studio album, Let England Shake, on 18 April 2011. An accompanying music video, directed by Seamus Murphy, was recorded and was released in March 2011, prior to the single release. It is the fourth part of a twelve music-film project documenting Let England Shake.

"The Wheel" is a song by the English musician PJ Harvey. It is the tenth track and lead single from her ninth studio album, The Hope Six Demolition Project, and was released digitally on 22 January 2016 and physically on 4 March 2016 on Island Records.The Hope Six Demolition Project is the upcoming ninth studio album by English singer-songwriter and musician PJ Harvey. Scheduled to be released on 15 April 2016 on Island Records, the album is Harvey's first since her acclaimed Mercury Prize-winning album Let England Shake, released in 2011.The album's title is a reference to the HOPE VI projects in the United States, "where run-down public housing in areas with high crime rates has been demolished to make room for better housing, but with the effect that many previous residents could no longer afford to live there, leading to claims of social cleansing." The HOPE VI program is directly referenced in the album's opening track and second single "The Community of Hope". The title is inspired by Harvey's trip to Washington D.C. with photographer/filmmaker Seamus Murphy where she was given a tour by Paul Schwartzman of The Washington Post, who directly influenced some of the lyrics on the song. Upon its release, the song drew criticism directly from council members of Ward 7 in Washington, D.C.

Dude, post what you want!  Doesn't matter to me.  Heck, it's not just pop I like, sometimes I post something that's American/Country if it has enough elements of some type of rock (southern, folk, country rock).  So post away.  Doesn't mean I'm gonna like it.

Down By The Water is okay.  It's certainly not special.  And you're right, I wouldn't call it classic rock, but that doesn't matter.  It's not difficult to listen to, but it doesn't stir me to hear more.

A Perfect Day Elise is better.  Even though it sounds somewhat the same as the previous song.  She has a good voice, and I like the backing vocals on this, and I presume she performs those as well as lead vocals.  I wouldn't consider her sexy, but I wouldn't kick her out either, if you know what I mean.

Good Fortune sounds very poppish.  And the sexiness level increases here.  This almost sounds like Chrissie Hynde singing a B52's song.  Not bad.  I don't remember ever hearing any of this, so I'm guessing she never took off in the U.S. Best song so far.

This Is Love keeps it interesting.  A much more rocked up song.  Finally some interesting guitar playing, even if it's not lead guitar.  She's not just a pop princess, at least that's the feeling I get with this song.  I admire a female pop artist that can turn it up and rock out.  Cool.

The Glorious Land shows a bit of her weird side.  It's funny, I didn't notice an accent in the first two songs, but I have since.  This seems a bit more like art rock to me.  Which goes along with weird.  But weird usually doesn't register with me, so this one is more of a let down.  Especially the out of place trumpet.

The Wheel completes the circle as a political comment.  I have nothing against a good political song.  Political ideals can really produce inspired songwriting.  Like CCR's Fortunate son.  Anyway, the politicians in Washington didn't like it because somebody's calling them out.  This is another pretty good song.

So what have I learned?  PJ Harvey is an English pop star that knows how to write music and mix up her influences.  She can definitely rock out if she so chooses. She's not somebody that I will seek out, but I enjoyed the listening experience.

"Especially the out of the place trumpet". It sounds like, she has mixed pieces of other songs/records in some of the songs on LES, that doesn't really fit in. Personally, I think it works, and it's not a thing you hear every day.

Glad you like this more, than I thought you would.

Like most "music-people" I truly respect, she's also a multi instrumentalist/singer-songwriter, as far as I know.

DOWN BY THE WATER ... eh, very repetitive feel to it with not much melodically. As a single I was looking for something catchy, didn't find it.

A PERFECT DAY ELISE ... sounds like this picks up where Down By The Water left off except she is singing through a bullhorn, which I've always found distracting an unnecessary for the most part. I do with Weiland STP a pass on their usage though (just so you know). Another monotone feeling track as well. hmmmm.... Am I detecting a pattern in her music?

GOOD FORTUNE ... Well this is a big improvement yet still outside of my wheelhouse as bossman woudl say.

THIS IS LOVE ... Similar to Good Fortune in that its an improved song and now in this case video as well :-)

THE GLORIOUS LAND ... I would call this very European meaning its very easy for me to hear the difference between what works over there and what here. I appreciate that you will understand why I dont understand how you like this.

THE WHEEL ... The pattern of her songwriting holds true all the way through this. Clearly she is not an artist I would enjoy and therefore Im not interested in here albums, but as always Im grateful to have a feel for what she is about as an artist. I wish much European success!!