VIDEO'S OF THE WEEK: SIMPLE MINDS 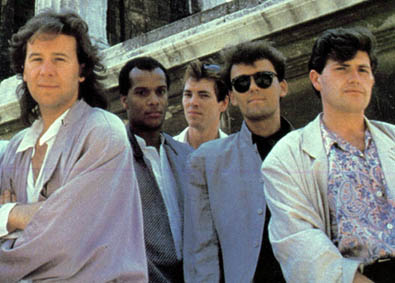 As I've said before, around 1985 I was a fan of the british New Wave-sound, like U2, The Alarm and....Simple Minds among others. Simple Minds probably started out like a "New Romantic-band" as english bands were called, that sounded and looked like....whatever they looked like in 1980, like Duran Duran, but they developed into a rock-band probably around 1983-85. I knew SM from around 1982, but I thought, that they were too much POP-sounding for my taste at that time, but there was something in their sound, that made them sound better to me than Yazoo or whatever my sister was listening to at that time, probably the guitars. I had taped "Glittering Prize" in 1982 on a BetaMax-tape from the TV, and liked it, but it wasn't until I heard "Don't You Forget About Me" on a vacation in Spain in 1985, that I really noticed SM as a band, I should buy some music....by. In the fall, they released "Once Upon A Time", and looking at that album in a recordstore, I realized that DYFAM wasn't to be found on the album, but I bought it anyway, and I'm very glad I did, because that album is awesome, even to this day!! Just like Joshua Tree, it's one of the very best albums from the 80's. Not one bad track on the album, and I love the sound of the electric piano and the drums. To me, it's THE sound of the mid-eighties.I then became a fan, and bought the double-live album they released in 1987, but I only listened to that one, a couple of times. The next album they made, I didn't buy, because I didn't like the single from it, that was being played on the radio, but in 1991 they made a new album/single that I DID like, but it was to be the last Simple Minds-album I ever bought.

Empires and Dance is the third studio album by Scottish new wave band Simple Minds. It was recorded in Wales, on the Rolling Stones mobile, and released on 12 September 1980, through record label Arista.

SOMEONE, SOMEWHERE IN SUMMERTIME (Live 1983)

"Someone Somewhere In Summertime" is a song by Simple Minds released as the third single from the album New Gold Dream (81–82–83–84) in November 1982. Its performance in the UK Singles Chart was significantly poorer than the band's two previous hits, peaking at no. 36 and charting for 5 weeks. Nonetheless, it has become a live favourite and acclaimed as one of the album's most popular tracks.The song also charted in Ireland, peaking at number 19.Mel Gaynor was the drummer for the song, with Kenny Hyslop and Mike Ogletree being the other session drummers for New Gold Dream (81–82–83–84). No promotional video was made for the song's release, as the band were preparing for a forthcoming tour of the UK.

"Waterfront" is a 1983 single from Simple Minds, the first release from the album Sparkle in the Rain.Featuring a new, rockier sound, "Waterfront" scaled the charts in various countries around the world, including hitting #1 for two weeks in New Zealand. It also reached #13 on the UK Singles Charts. Today, it is a live favorite and is regarded as a Simple Minds signature song.It features a bass line consisting of a single note (D) throughout.The version as released on 7" vinyl single (and on the original Now That's What I Call Music compilation) differs from versions available on CD. The original single didn't feature the repetitive bass-line that leads into the main body of the song, but had a "one, two....one, two, three, four.." drumstick count-in by drummer Mel Gaynor.It has been used for many years as the song Sheffield Wednesday football club come out to before home matches. The version originally played was a live version, however it has since been changed to the studio recording.

ALL THE THINGS SHE SAID

All the Things She Said is a song by Scottish rock group Simple Minds released as the third single from their seventh studio album, Once Upon a Time. The song reached number 9 on the UK Singles Chart and number 28 on the US Billboard Hot 100. The song was featured in the 2013 best-selling video game, Grand Theft Auto V, on the fictional radio station Los Santos Rock Radio.

LET THERE BE LOVE

"Let There Be Love" is a song by Scottish rock band Simple Minds and first single from their 1991 album Real Life.The song was written by Charlie Burchill and Jim Kerr and released by Virgin Records; it became an international hit, reaching the Top 10 in Ireland, Sweden, United Kingdom, The Netherlands and Switzerland, it also reached #1 in Italy.Australian band Icehouse covered the song for their album The Berlin Tapes in 1995.

I TRAVEL (from 1980) ...  What the heck is he doing to that poor mic stand at the end of this?  I remember this sound and the rise of these types of bands, and I didn't come around to it much, maybe a bit but nothing in my collection sounds anything similar to this, guess I'm proud of that

SOMEONE, SOMEWHERE IN SUMMERTIME (Live 1983) ... I cant say if these guys were innovators or just following the trends of the time, sounds very much like a U2 track of that same era, and you know how much I like them.

WATERFRONT ... Featuring a new rockier sound!  Well this makes 3 for 3 on the following trends thing.  So the answer to my question of whether these guys were innovators or not is a resounding NOT.

ALL THE THINGS SHE SAID .. This sounds familiar, it must have been one of the follow up tunes after their Breakfast Club success.  Niels, please tell me you didn't own a pair of those striped pants he is wearing back in the day!

I liked their one hit here in the states, but that's about it, I do remember a few follow up tracks coming on the heels of that success but nothing that interested me enough to check them out.

I didn't own a pair of those striped pants.

I would have never expected you to cover SM.  It seems way too boring for a man that likes such exciting music...

Hardy-Har-har-har..(or how you spell that)

I agree. SM can be very, very boring, but at the same time, they've made one of my favorite albums from the 80's, so they certainly qualify to having their own VOTW.

I Travel - Never heard this song.  I think that may be a recurring theme.  New wave groups from the 80's were so dang weird. That dude is really playing that guitar, but is there actually any guitar in the song?  All you can really hear is the keyboards.

SSiS - I've never heard this song before.  But it's definitely better than the previous track.  At least I can hear some guitar. I wouldn't mind hearing the studio version of this song.  I could easily see myself liking this track back in the day.

Waterfront - I've never heard this song before.  I bet I could've played bass on this one.  Probably still could.  For it to be the band's signature song, it does absolutely nothing for me.  One for three so far.

ATTSS - I've heard this song before.  The guitar is pretty cool here.  This is more like it.  I have to say, Dana Carvey was a pretty good singer in his day.

LTBL - I've never heard this song before.  I tell you what, if you put some cool "Edge" guitar on it, this would have fit U2 perfectly back then.  I could hear it easily fitting on Achtung Baby.  Kerr really was a very good vocalist, and he sounds a good bit like Bono here.

So this was just better than 50 per cent.  I've always wanted to check out some of SM's work, as I'm really only familiar with a couple of the hits.  I still might someday.  This didn't convince me to do it or not do it, so the jury is still out.