VIDEOS OF THE WEEK: ELVIS COSTELLO 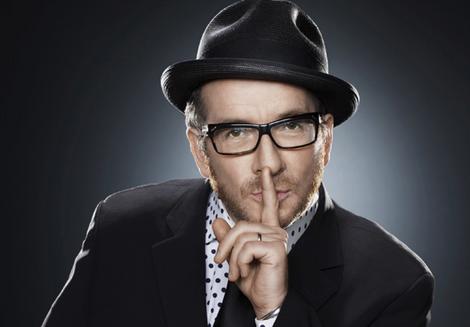 I'm not THE biggest fan of Elvis Costello, but I certainly respect him as a song-writer and as a good singer, and I've got 4-5 albums by him. He might not have the very best voice, but you/I can hear, that he's VERY good at hitting the right notes, and that always impresses me. I could had seen him live in concert a few years back, but a "friend" of mine "forgot" to ask me, and I didn't know about the concert, which was held in Sweden, but never the less near my home. I would very much had liked to had seen him live, though. Here's some text from wiki:Declan Patrick MacManus (born 25 August 1954), better known by his stage name Elvis Costello, is an English musician, singer-songwriter and record producer. He began his career as part of London's pub rock scene in the early 1970s and later became associated with the first wave of the British punk and new wave movement of the mid-to-late 1970s. His critically acclaimed debut album, My Aim Is True, was recorded in 1977. Shortly after recording it he formed the Attractions as his backing band. His second album, This Year's Model, was released in 1978, and was ranked number 11 by Rolling Stone on its list of the best albums from 1967–1987. His third album, Armed Forces, was released in 1979, and features his most successful single "Oliver's Army". His first three albums all appeared on Rolling Stone's list of the 500 Greatest Albums of All Time.Costello and the Attractions toured and recorded together for the better part of a decade, though differences between them caused a split by 1986. Much of Costello's work since has been as a solo artist, though reunions with members of the Attractions have been credited to the group over the years. Steeped in wordplay, the vocabulary of Costello's lyrics is broader than that of most popular songs. His music has drawn on many diverse genres; one critic described him as a "pop encyclopaedia", able to "reinvent the past in his own image".He has won multiple awards in his career, including a Grammy Award, and has twice been nominated for the Brit Award for Best British Male. In 2003, Costello and the Attractions were inducted into the Rock and Roll Hall of Fame. In 2004, Rolling Stone ranked Costello number 80 on their list of the 100 Greatest Artists of All Time.Costello has also co-written several original songs for motion pictures, including "God Give Me Strength" from Grace of My Heart (1996) (with Burt Bacharach) and "The Scarlet Tide" from Cold Mountain (2003) (with T-Bone Burnett). For the latter, Costello was nominated (along with Burnett) for the Academy Award for Best Original Song and the Grammy Award for Best Song Written for Visual Media.

This Year's Model is Elvis Costello's second album and his first with the Attractions, released in 1978. It was mainly recorded at Eden Studios in West London.It was voted the best album of the year in The Village Voice Pazz & Jop critics poll. In 2000, Q magazine placed This Year's Model at number 82 in its list of the 100 Greatest British Albums Ever. In 1987, Rolling Stone magazine ranked it number 11 on its list of the best albums of the period 1967–1987. In 2003, the album was ranked number 98 on Rolling Stone magazine's list of The 500 Greatest Albums of All Time.I had a friend, who was an Elvis Costello-fan from around this time. In 1978, I couldn't really hear, what was so good about Costello. Later on, I bought Costello's first two albums, and now I think, they're quite good.

“(What's So Funny 'Bout) Peace, Love, and Understanding” is a 1974 song written by English singer/songwriter Nick Lowe and recorded in the best-known version by Elvis Costello. The Elvis Costello & The Attractions version was first issued as the B-side of Lowe's 1978 single American Squirm credited to "Nick Lowe and His Sound". At the time, Lowe was Costello's producer, and he produced this track as well. When the song became a hit, it was quickly appended as the last track to the US edition of Costello's album Armed Forces. It has appeared on most of Costello's "Best of..." compilations over the years, as well as on the soundtrack to the film 200 Cigarettes. Live versions appeared on Rock and Roll Hall of Fame, Volume 7: 2002–2003, and 2012's The Return of the Spectacular Spinning Songbook, both by Elvis Costello and the Attractions. In 2004, Rolling Stone magazine ranked this version of the song as the 284th best song of all time.

"Veronica" is a single from Elvis Costello's 1989 album Spike, co-written by Costello with Paul McCartney. The song "Veronica" was co-produced by T-Bone Burnett and Kevin Killen, and features Paul McCartney on his iconic Höfner bass. In 2004, Entertainment Weekly voted it one of Costello's top ten greatest tunes.The song focuses on an older woman who has experienced severe memory loss. Costello's inspiration for this song was his grandmother, who suffered from Alzheimer's. When talking about the song on a VH1 interview, Costello reminisced about his grandmother having "terrifying moments of lucidity" and how this was the inspiration for "Veronica". In his 2015 autobiography, Unfaithful Music & Disappearing Ink, Costello wrote of his collaboration with McCartney, "I'd brought an early version of "Veronica" that you would have recognized […] All the words I'd already written were about my paternal grandmother, Molly, or more formally, Mabel Josephine Jackson. In fact, her Catholic confirmation name, Veronica, provided the very title of the song"."Veronica" was also Costello's highest-charting Top 40 hit in the United States, peaking at No. 19 on the Billboard Hot 100 singles chart, No. 1 on its Hot Modern Rock Tracks chart, and No. 10 on its Mainstream Rock Tracks chart.In 1989, this song was being played a lot on the radio, and I started to think, that it was about time to purchase my first Costello-album, and I did. I didn't like the album, though, only this song.

THE OTHER SIDE OF SUMMER

The Other Side of Summer" is a single from Elvis Costello's 1991 album Mighty Like A Rose, written by Costello. The song was co-produced by Costello, Mitchell Froom and Kevin Killen. A Beach Boys pastiche, the song featured a Wall of Sound production. The single reached number 43 in the UK Singles Chart and charted in Canada and Australia. It also reached number 1 on the US Modern Rock Tracks chart and number 40 on the Album Rock Tracks chart.

It should be no secret, that perhaps the only reason, I've made this VOTW, is because of the album Costello made together with Burt Bacharach back in the 90's. That's one great album imo. I don't know, who's the biggest reason for that album being so great, but I think it's one of THE best cooperations in music I've heard maybe since the classic McCartney/Lennon, Jagger/Richards aso. I was lucky enough to have seen Burt Bacharach in concert a few years ago, and he played "God Give Me Strenght. I do think, that it is this album, that have made me a fan of Costello. Bacharach I've been a fan of since I was 5-6 years old :-)

Never been a fan of EC myself, but I've heard a song or two from Mike Pell that I seem to remember liking.

Pump It Up - This one is pretty good.  There's really nothing to dislike about it.  Cool, cool bass work.  And a nice driving beat.  He's an okay singer, I've heard much worse.

What's So Funny - Another fairly decent song.  I'm telling you, his bass player is pretty dang good.  I like the simple style of their videos.  But I just don't remember hearing much at all from this band when I was growing up.  Maybe they just didn't translate well in the Southern United States.  Yet they are in the RARHOF.

Veronica - I believe this is one of the few songs by EC that seem somewhat familiar.  I know I've heard it, but I don't really think I've ever "listened" to it.  But it's a really cool song, now that I'm paying attention.  It shows that he can sing pretty good.  Definitely his best performance so far.

The Other Side Of Summer - Not so sure about this one.  It's not bad, just what I would imagine his music sounding like, and it really holds no interest for me.  Though he does look more "cool" with the long hair and beard.

This House Is Empty Now - This is a beautiful song.  There is no doubt in my mind now, he's a terrific singer.  The song is so haunting, the type of music I love.  The second song as well.  Maybe I need to look this album up.  I'm quite interested in it.  Is it a concept album?  Just curious.

Nice post Niels.  I'm not interested in running out and picking up a bunch of his albums, but I am interested in picking up that last one.  Maybe a greatest hits as well.  Didn't he have a song called Everyday I Write The Book or something like that.  Seems like that may have been his biggest hit here in the U.S.

I strongly recomend the Bacharach-album. I never considered it to be a concept-album, but I guess it could be.

Thanks for watching and commenting.