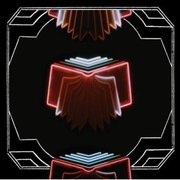 Arcade Fire is an indie rock band based in Montreal. Quebec, Canada.  Arcade Fire came to prominence when they released their debut album Funeral in 2004 to critical acclaim. 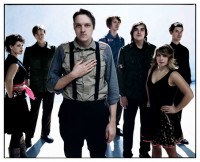 Arcade Fire issued a self-titled EP in 2003, having briefly retreated to Maine for the recording sessions. Propelled by Win Butler's quavering vocals and his bandmates' symphonic swells, the disc helped earn the band an official offer from Merge Records. The bandmates' luck faltered later that year, however, when Chassagne's grandmother passed away. The Butler brothers' grandfather followed suit in March 2004, and Parry's aunt died one month later. Seeking catharsis in the studio, the members of Arcade Fire funneled their energies into the creation of Funeral. Released in September 2004, the debut album was met with unanimous acclaim -- both commercially and critically -- and Arcade Fire found themselves maintaining a nearly constant presence on the road, playing such high-profile festivals as Lollapalooza and Coachella between a slew of smaller club dates. They also appeared on the cover of Time magazine's Canadian edition, garnered a Grammy nomination for Best Alternative Music Album, rubbed shoulders with superfan David Bowie, and toured alongside U2.

Following an exhausting year, Arcade Fire decamped to a church outside of Montreal to work on a second release. The ambitious Neon Bible arrived in March 2007, featuring such grand ornamentations as a pipe organ, a military choir, and a full orchestra. The album peaked at number two and sparked another tour, which found the band playing more than 120 shows over the course of a year. When touring wrapped up in early 2008, Arcade Fire played several shows in support of presidential candidate Barack Obama before beginning to work on a third album. The resulting Suburbs, an eclectic 16-track ode to childhood, suburban sprawl, and middle-class dreams both won and lost, arrived on August 2, 2010

You need to be a member of ARCADE FIRE to add comments!

Yeah, but you had to become a "fan", before you could write that comment, Scott

Yeah, it really stinks. I've just sold the tickets, though, at half the prize, but that's better than nothing, I guess.

Comment by Scott on August 27, 2011 at 9:06am
Dang it!  I had a reminder set so that I could write something about not caring about this concert review!

Comment by RJhog (Admin) on August 27, 2011 at 8:43am
That stinks Niels.  Sorry to hear about your back.  Hopefully you'll be feeling better soon!

), because I'm not going. The concert is tonight, and my back is killing me!!!

Of course I will.  I thought I was a member of every group.  I guess this one got by me.

Comment by Niels (Mod) on August 24, 2011 at 3:32pm
The only reason, I made this "Group", is that, now I've got a place to post my up-coming concert-review, that NONE of you will care about, but I'm doing it anyway, and I'll bet, you'll become a member, right RJhog??