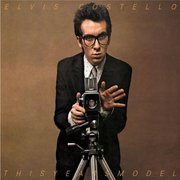 Declan Patrick MacManus, known by the stage name Elvis Costello, is a British singer-songwriter. He came to prominence as an early participant in London's pub rock scene in the mid-70s and later became associated with the Punk/New Wave musical genre. 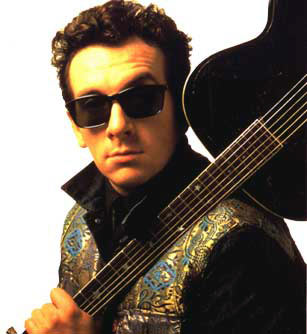 When Elvis Costello's first record was released in 1977, his bristling cynicism and anger linked him with the punk and new wave explosion. A cursory listen to My Aim Is True proves that the main connection that Costello had with the punks was his unbridled passion; he tore through rock's back pages taking whatever he wanted, as well as borrowing from country, Tin Pan Alley pop, reggae, and many other musical genres. Over his career, that musical eclecticism distinguished Costello's records as much as his fiercely literate lyrics. Because he supported his lyrics with his richly diverse music, Costello emerged as one of the most innovative, influential, and best songwriters since Bob Dylan.

In 2001, he found himself with a residency at UCLA, where he performed several concerts and was instrumental in teaching music during the year. He also began work on a self-produced album that featured Pete Thomas and Nieve -- now billed as a band called the Imposters -- entitled When I Was Cruel, and the album finally found release via Island Records in the spring of 2002; at the end of the year, he released a collection of B-sides and leftovers from the album's sessions entitled Cruel Smile.

When I Was Cruel kicked off another productive era for the ever prolific Costello. In 2003, he returned with North, a collection of classically styled pop songs pitched halfway between Gershwin and Sondheim. The next year, he collaborated with his new wife, Diana Krall, on her first collection of original material, The Girl in the Other Room. That fall, Costello released two albums of his own original material: a classical work entitled Il Sogno and the concept album The Delivery Man, a rock & roll record cut with the Imposters. 2006's My Flame Burns Blue was a live album with Costello fronting the 52-piece jazz orchestra the Metropole Orkest; the release featured classic Costello songs (with new orchestral arrangements) alongside new compositions and a performance of the entire Il Sogno. The River in Reverse, a collaboration with R&B legend Allen Toussaint, arrived in 2006, followed by Momofuku, another effort credited to Elvis Costello & the Imposters, in 2008. That same year, Costello teamed up with veteran producer T-Bone Burnett for a series of recording sessions, the results of which were compiled into Secret, the Profane and Sugar Cane and readied for release in early 2009. The pair also recorded a second album, National Ransom, which appeared the following year.

You need to be a member of Elvis Costello to add comments!

Comment by Niels (Mod) on September 6, 2010 at 2:21pm
Please take a listen to "This house is empty now". Elvis Costello & Burt Bacharach together made a GREAT album in 1998. I love that song.