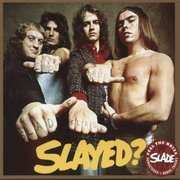 Slade may have never truly caught on with American audiences, but the group became a sensation in their homeland with their anthemic brand of glam rock in the early '70s, as they scored a staggering 11 Top Five hits from 1971 to 1974.

Slade are an English rock band. The British Hit Singles & Albums stated that they were the top UK group of the 1970s. They were the first act to have three singles enter at #1, and all six of the Wolverhampton band's chart-toppers were penned by Noddy Holder and Jim Lea. Total UK sales were 6,520,171, and their best selling single, "Merry Xmas Everybody", sold more than 1 million copies worldwide.
The Illustrated Encyclopedia of Music commented that with Holder's powerful vocals and guitarist Dave Hill's equally arresting dress sense, Slade were one of the most successful British chart bands of the 1970s, scoring seventeen consecutive Top 20 hits. They are well known for the deliberate misspelling of their song titles, and for the song "Merry Xmas Everybody" (first released in December 1973), now one of the most iconic Christmas pop songs in the United Kingdom. Slade are from the Black Country area of the West Midlands: Drummer Don Powell and bass guitarist Jim Lea were both born and raised around Wolverhampton, whilst lead guitarist Dave Hill was born in Devon but moved to Wolverhampton as a child. Lead singer Noddy Holder was born and raised in the nearby town of Walsall. In writings by and about Slade, the Trumpet public house in Bilston is mentioned frequently as a band meeting place, especially in their early days.
The group dominated the UK charts during the early 1970s. During the height of their success, Slade out-performed their chart rivals, such as Wizzard, Sweet, T. Rex, Suzi Quatro, Mud, Smokie, Gary Glitter, Roxy Music and David Bowie. In the UK, they achieved twelve Top 5 hit singles from 1971 to 1974, six of which topped the chart. In total, Slade had seventeen Top 20 hits between 1971 and 1976 including six #1s, three #2s and two #3s. No other UK act of the period enjoyed such consistency in the UK Top 40 and Slade actually came the closest to matching The Beatles' twenty two Top 10 records in a single decade (1960s). Three of their singles entered the charts at #1 and they sold more singles in the UK than any other group of the 1970s. By 1973 alone, "Merry Xmas Everybody" had sold over one million copies globally, and gained gold disc status. They toured Europe in 1973 and the US in 1974.


Slade have released over thirty albums, three of which reached #1 on the UK Albums Chart.While Slade's attempts at cracking the United States market were largely unsuccessful, they left their mark on several US bands who cite Slade as an influence. Kiss bassist Gene Simmons admitted that his band's early songwriting ethos and stage performance style was influenced by Slade. In his book, Kiss and Make-Up, Simmons wrote on page 85, "the one we kept returning to was Slade," and "we liked the way they connected with the crowd, and the way they wrote anthems... we wanted that same energy, that same irresistible simplicity. but we wanted it American-style". Tom Petersson of Cheap Trick said on their From Tokyo to you DVD that his band went to see Slade perform, and that they used "every cheap trick in the book", thus inadvertently coining his group's name. Cheap Trick covered the song "When the Lights are Out" (the original appeared on Old New Borrowed and Blue) on their 2009 release, The Latest. Quiet Riot had US hits with their covers of "Cum On Feel the Noize" and "Mama Weer All Crazee Now". The origins of Slade's influence on Quiet Riot dated back to the early 1970s, when Kevin DuBrow photographed Slade during their first Los Angeles appearances at the Whisky a Go Go.


The band started out as the N'Betweens in 1966. They initially had modest local success, but recorded a demo EP for the French record label, Barclay Records. Their debut single, "You Better Run" (November 1966), (written and produced by Kim Fowley did not make the charts, and the group did not record again for well over two years, but on the live circuit they built a nationwide reputation. In the late 1960s the band changed its name to Ambrose Slade, at the suggestion of Fontana's Jack Baverstock, before being adopted by their manager, Chas Chandler. Their debut album, Beginnings was a commercial flop, but Chandler worked with them on their image. Their name was eventually shortened to The Slade, and, finally, Slade, and the band adopted a skinhead look, in an attempt to gain publicity from what was then a newsworthy youth fashion trend. They later abandoned this look, due to the unwelcome association with football hooliganism. They grew their hair long again, in time to become a leading part of the glam rock movement, releasing songs with Black Country style misspelled titles which made them stand out. Their first album as Slade, Play It Loud (November 1970), failed to sell sufficiently to reach the UK Albums Chart. Slade made their first hit with a cover of the Bobby Marchan penned, Little Richard number, "Get Down and Get With It", becoming an early trademark for the group. "Get Down and Get With It" was Slade's only single on Polydor that was not written by Holder and Lea. The attendant appearance on BBC Television's Top of the Pops brought Slade to a wider audience, and "Coz I Luv You"'s chart topping stint less than five months later propelled them towards glam rock stardom.

From 1971 to 1975, the band scored consecutive hit albums and singles. Their Christmas anthem has resurfaced seasonally and formed one of a successions of singles that entered the UK chart at number one - a feat unheard of since the days of the Beatles.
In November 1971, NME reported that Slade had turned down a multi-million dollar campaign, including a television series and a heavily promoted tour of the US. "But", commented Holder, "Acceptance would have meant the cancellation of many commitments here - and the last thing we want to do is to mess around the people who have put us where we are". Their albums, Slade Alive! and Slayed? (both 1972), are considered to be some of the finest albums of the glam era.

Powell was critically injured in a car crash in Wolverhampton on 4 July 1973. Powell's 20 year old girlfriend, Angela Morris, was killed, and he broke both ankles and five of his ribs, and was in a coma for nearly a week. With his life in danger, the band's future was left in the balance. Powell recovered after surgery, and was able to join the band ten weeks later in New York, where they recorded "Merry Xmas Everybody" - in the middle of an August heatwave. Powell still suffers with acute short-term memory loss and sensory problems.

The soundtrack album to their film, Slade In Flame (1974) contained a more mature sound, and their underrated, semi-autobiographical film has subsequently gained cult status.
With glam rock's dissolution and punk rock's emergence by the mid 1970s, the hits eventually dried up. Slade stuck to their guns and kept touring and releasing albums, with Whatever Happened to Slade (1977), proving that the group's humour remained intact despite their fall from the top of the charts.


In August 1980, Ozzy Osbourne, during his Blizzard of Ozz tour, cancelled his set at the Reading Festival at short notice. Slade, who had all but disbanded, were recommended to replace them. A demoralised Hill had effectively left the band, and initially refused to do the show when asked by the other band members, but Chandler convinced Hill to play what could well have been their last live show. To Hill's astonishment, the band stole the festival (highlights of their performance were also broadcast on BBC Radio 1's Friday Rock Show Reading special), and quickly became darlings of the music press.
A new run of chart success followed, though not on the large scale of their 1970s heights. In 1981, "We'll Bring the House Down" reached #10 in the UK, and an album of the same name got to #25. This was followed by another chart hit "Lock Up Your Daughters", and they had two further UK Top 10 hits with "My Oh My" (#2) and "Run Runaway" (#7). The latter two singles also reached the US Top 40, with "Run Runaway" peaking at #20. In March 1982, NME stated Slade were facing trouble for their album, Till Deaf Do Us Part. Dealers were refusing to stock the album, because of an 'offensive' picture of a nail piercing an ear drum.

Slade's album, Keep Your Hands Off My Power Supply (originally issued as The Amazing Kamikaze Syndrome in the UK a year earlier in 1983) had a decent transatlantic chart presence. Holder and Lea branched into record production as for Girlschool's 1983 release, Play Dirty. Despite another release, Rogues Gallery, Slade were unable to retain their new-found American audience or rekindled British following and they eventually largely faded from sight, following the release of a final album, You Boyz Make Big Noize in 1987. After a few scattered minor hits over the next few years, Slade returned to the UK Singles Chart in 1991 with the song "Radio Wall of Sound".


Holder became weary of constant touring and effectively managing the day to day running of the band. He left at the end of 1991, after 25 years with the band, to pursue other successful career paths. Now a popular television personality, he was made a MBE in 2000.
Rather than take on another singer, Lea effectively retired from live work, preferring to work alone in the studio. He released a solitary single under his own name, plus an album and three singles as The Dummies, during the latter years of his tenure with Slade. After Slade split, Lea remained resolutely silent, save for the rather sporadic release of a few singles under pseudonyms such as The Clout, Greenfields Of Tong and also as Whild. In February 2007 he released an album of original material, credited with his full name, James Whild Lea, entitled Therapy.
Powell and Hill formed Slade II with three other musicians after the departure of Holder and Lea. The suggestion to call the group Slade II came from Holder. The group name was once again shortened to Slade after a period, and over the years a number of new members have come and gone with only Hill and Powell remaining constant throughout. The group work solidly on the UK theatre circuit in the winter months, and throughout Europe during the rest of the year. They have released one album, which has been retitled a number of times and also a few singles in Europe.

Powell is currently collaborating with Lise Lyng Falkenberg on his biography.

Their anarchic attitude passed onto The Damned, The Wonder Stuff, and Oasis, the latter of whom covered "Cum On Feel the Noize". Comedians Vic Reeves, Bob Mortimer, Paul Whitehouse and Mark Williams affectionately parodied the band in a number of what the band called 'hysterically accurate' "Slade in Residence" and "Slade on Holiday" sketches, in their The Smell of Reeves and Mortimer television programme in the early 1990s.
"All right? You look like Dave Hill from Slade" - Karl Pilkington, referring to his girlfriend's abysmal haircut, on the Ricky Gervais, Stephen Merchant and Pilkington Xfm radio show, on 8 November 2003.
"This goes out to one of my all-time groups... Slade". - Lowell George (Little Feat) before performing "Willin'" on 19 July 1973 in Denver, Colorado.

You need to be a member of SLADE to add comments!

Comment by Niels (Mod) on September 6, 2010 at 11:48am
Either you were a SWEET-fan or a SLADE-fan when I was a kid (in Europe) in the mid-seventies. I guess I liked the Sweet most then, but that have changed a bit. Slade have made many great songs, fx. "Everyday" and "Thanks for the memories". I guess those two are my favorites.