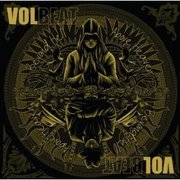 Volbeat, a Danish metal band begun by former Dominus leader Michael Poulsen in October of 2001, became a dominant force not only in Danish metal, but in Danish rock as a whole, charting albums and singles on a regular basis. 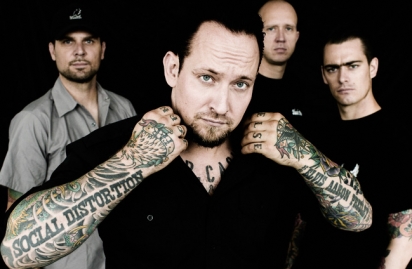 Volbeat is a Danish heavy metal band formed in Copenhagen. They play a fusion of rock and roll, heavy metal, punk and rockabilly. They are inspired by classic rock and roll artists such as Elvis Presley and Johnny Cash, as well as more contemporary hard rock, punk rock and metal bands, such as AC/DC, Social Distortion, The Misfits, Napalm Death and Metallica.[1] Their line-up consists of vocalist and guitarist Michael Poulsen, bassist Anders Kjølholm and drummer Jon Larsen. The band is signed to Dutch label Mascot Records and has released four studio albums and one DVD. All of their studio albums were certified gold in Denmark. Their second album Rock the Rebel/Metal the Devil received platinum status, and their latest release Beyond Hell/Above Heaven was subject to widespread international critical acclaim, receiving double platinum in Denmark, platinum in Finland and Germany, gold in Sweden and Austria. 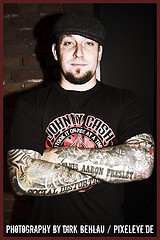 Singer Michael Poulsen first started in death metal band "Dominus". In 2000, Poulsen became fed up with death metal music and the death metal scene. This resulted in the end of Dominus. In 2001, Poulsen went on to form a new band with some friends and other former Dominus members. This was the beginning of Volbeat.
The band name Volbeat was derived from Dominus's third album name, which was called Vol.Beat (read as: Volume Beat). After selling 1,000 copies of their "Beat the Meat" demo tape, Volbeat was signed to a record deal by Rebel Monster Records, a sub-label of Mascot Records. 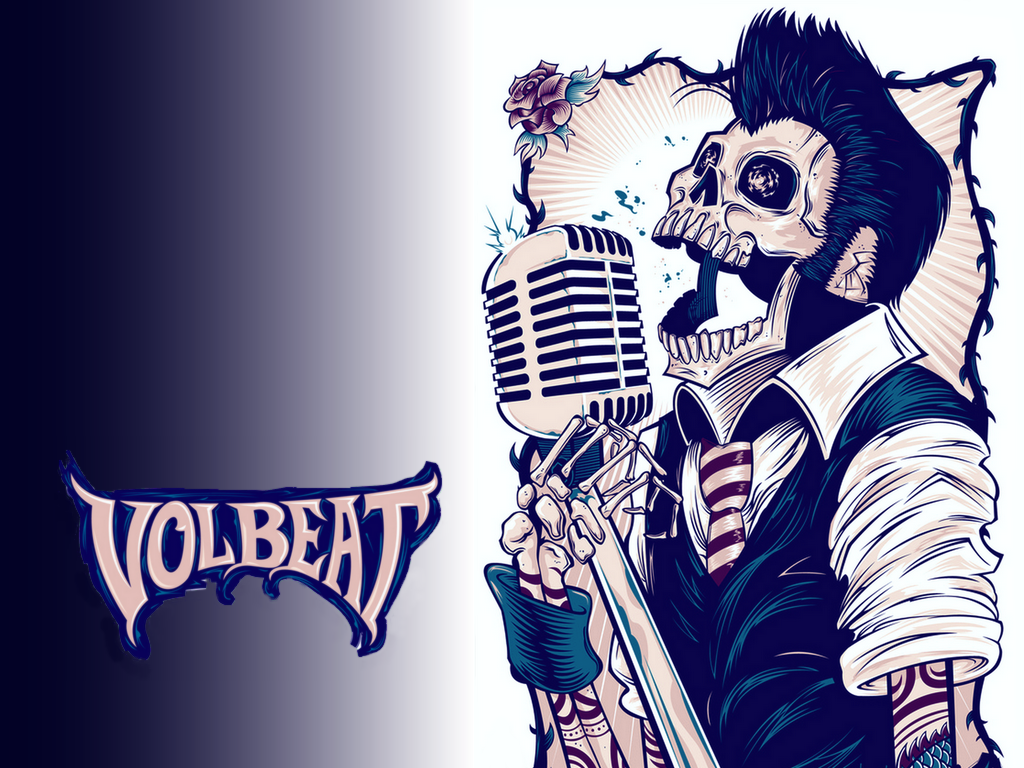 Volbeat released their first album, The Strength/The Sound/The Songs in 2005. The lineup for the album consisted of Michael Poulsen (vocals), Jon Larsen (drums), Franz Gottschalk (guitar) and Anders Kjølholm (bass). The album was a huge success in Denmark achieving a spot at No. 18 in the charts.[2] Critics were generally positive towards The Strength / The Sound / The Songs. The German hard rock magazine RockHard gave it 10/10 in a review.[3] The Strength / The Sound / The Songs also received a handful of awards, including Best Album in the Danish Metal Musik Awards in 2005.[4] Volbeat is also praised for its live performances. Their concert at Roskilde Festival 2006 received a 6/6 stars review in the Danish newspaper BT.[5] 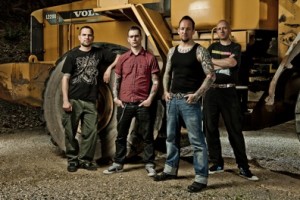 In 2007, the band released their second album titled Rock the Rebel/Metal the Devil. The band featured the same lineup as their first album. In week 8 of 2007, the record Rock the Rebel / Metal the Devil debuted as No. 1 in the Danish Top 40 for CD-sales.[4]
Volbeat opened the Roskilde Festival in 2007. Volbeat also supported Metallica together with Mnemic at their concert on Denmark July 13 of that year. They were to support Megadeth in Finland and in their home town, Copenhagen, and to make a few festival appearances for the summer 2008. Volbeat hired Thomas Bredahl following the recording of Rock the Rebel / Metal the Devil as a replacement for Gottschalk on guitar.

In 2008, Volbeat released their third album and first album with guitarist Thomas Bredahl, Guitar Gangsters & Cadillac Blood. Volbeat's album Guitar Gangsters & Cadillac Blood (2008) topped the Finnish Album Chart straight after its publication.[6] In 2009, Volbeat supported the symphonic metal band Nightwish on their U.S tour in May.[7] On May 31 of 2009 they were on the main stage of the Pinkpop Festival. They also supported Metallica on the North American leg of Metallica's World Magnetic Tour from October to December 2009.[8] In 2009 the band played at the biggest open-air festival in Europe (400,000–500,000 rock fans every year), Przystanek Woodstock[9] in Poland.

Touring and Beyond Hell / Above Heaven (2010–present) 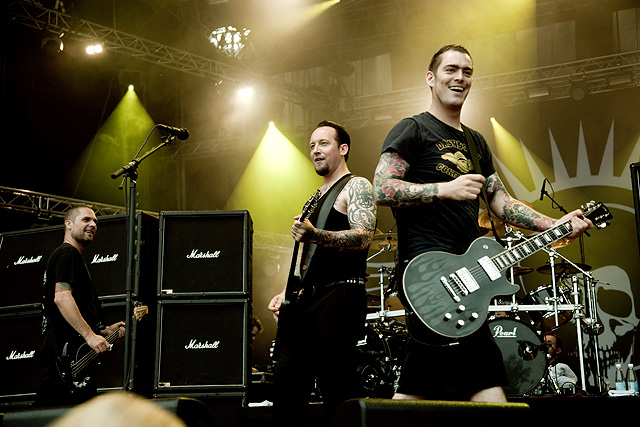 Volbeat had announced they are working on a new album called Beyond Hell/Above Heaven. In regards to the new album and its title in particular Poulsen said, “The album title refers to the overall theme of the album, and it continues the storyline from where "Guitar Gangsters & Cadillac Blood" left off…”.[10] Gramercy Theater. He then went on to say, "We have fast, slow and mid-tempo songs. We still blend different styles of punk, rock’n’roll, rockabilly, metal, heavy metal, thrash metal, country – we still keep it very open, it’s just music! I cannot say too much about it right now, but we’re really excited about it and it’s going to be very, very cool."[11] In an interview with EspyRock, Michael Poulsen explained the title of the album stating "…it’s a way telling people that we don’t belong or believe in neither heaven nor hell. So if we go beyond hell, we will make heaven look like hell, and if we go above heaven, we will make hell look like heaven. Heaven and hell is something we create in our minds and personal self-created demons come out of that."[12]
On January 25, 2010, it was confirmed that Volbeat would be performing at Download Festival in June 2010. It was also confirmed that Volbeat were to join Metallica, Megadeth, Anthrax, Slayer and others in the "Big Four" show at Sonisphere Switzerland.[13] On January 28, 2010, Volbeat signed with Primary Wave Talent Management. Primary Wave will represent the band in North America alluding to future U.S. tour plans, which have not yet been formally announced.[14] On March 30, 2010, it was announced that Volbeat will again be joining Metallica on their European leg. The band also joined Metallica after they finished recording with their first date being May 11 in Belfast, Northern Ireland.[15] It was also announced that the new album, Beyond Hell/Above Heaven was to be released on September 10, 2010. The band also announced their "Beyond Hell/Above Heaven Live 2010" tour.[16]

Guest musicians on the album include:

Furthermore, Volbeat announced that lead guitarist Thomas Bredahl will miss the first few shows on the US leg of the Beyond Hell/Above Heaven tour citing US Government visa issues. The band went on to say that the issues were a result of "an incident concerning theft of a barstool back in the day. He wasn’t exactly a juvenile delinquent or anything, but to Homeland security it’s all the same."[17] On August 19, 2010 it was announced that Thomas had gotten visa clearance and travelled to Chicago to play with the band.[18] For the few shows missed by Bredahl the band's drum technician Casper filled in on rhythm guitar while Poulsen switched to lead guitar duties. 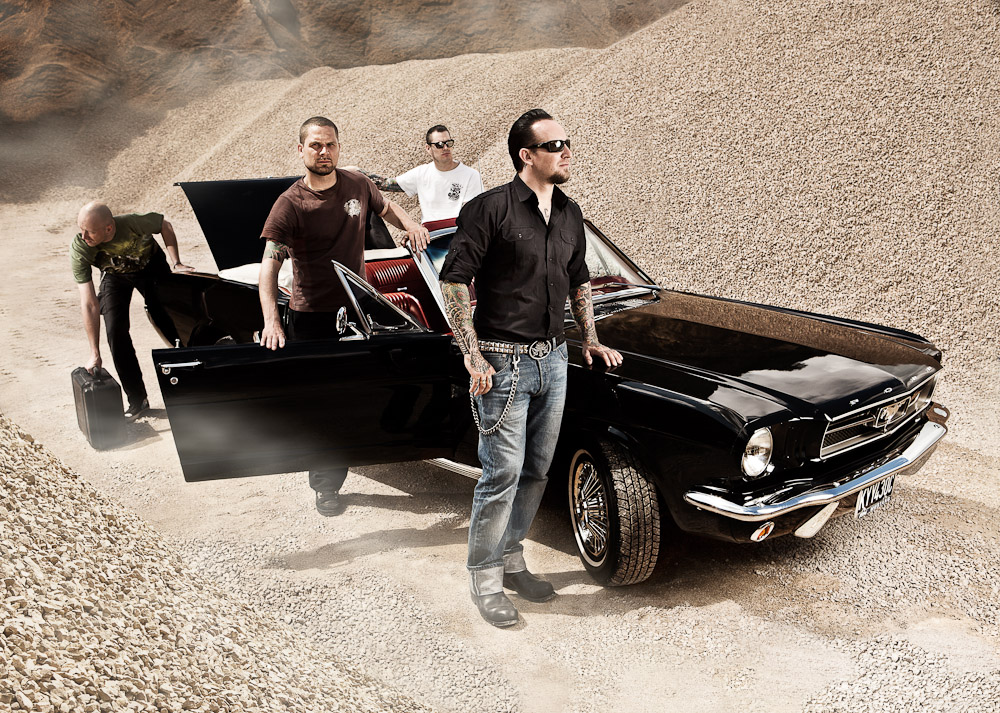 In 2011, Volbeat announced their Grand Summer Tour across North America. The tour began in Toronto, Ontario on July 24 at Heavy T.O., and concluded with a two-night stand on September 3 & 4 at the House of Blues in Anaheim, CA. Volbeat co-headlined this tour with rock powerhouse Cold on all U.S. dates, but not in Canada. On November 28, 2011, Volbeat announced the departure of Thomas Bredahl via their website,[19] stating "Volbeat has decided to part ways with Thomas Bredahl. Being in a band is in many ways similar to a marriage with ups and downs. At times you can work it out and sometimes you need to go separate ways... We want to thank him for the work he has put in for Volbeat and we wish him all the best in the future." Volbeat has committed to playing all 2011-2012 as scheduled either as a trio, or with a replacement guitarist.
On January 26, 2012, Volbeat joined Megadeth, Motörhead, and Lacuna Coil on Gigantour. The tour started in Camden, New Jersey and culminated on February 28, 2012 in Denver, CO at The Fillmore Auditorium. On the tour, Hank Shermann (Mercyful Fate) filled in as the guitarist for Volbeat.

You need to be a member of VOLBEAT to add comments!

With the exception of Cookie Monster intro, I like every song on this CD. I'm really digging 7 shots, right now though!!!

Aren't you glad I loaned you the CD?

Comment by Mike Mills on September 13, 2012 at 3:14pm
They were playing "A Warrior's Call" at the Atlanta Falcons game Sunday! Great Football "Fight" song!

Wow, that was quick! Nice Job!