ROCKOLLECTIONS: GOES TO THE MOVIES PT.2 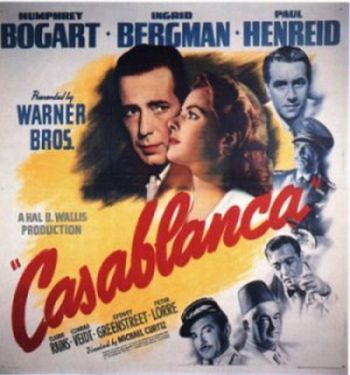 This is a Re-broadcast of a show originally done in late February 2011- not heard since.
In this chapter a look at how with the help of a Movie, the FIRST Rock & Roll song ever made it to the top of the Pop Charts- and not just here but all over the world.
The song had been released a year before and bombed, so the Movie was essential to its success!
After that, some proof that Scott McKenzie was not just a One-Hit Wonder, with a beautiful song he did as a followup.
And that song will lead into what may make you think I have lost my senses, fallen off the tracks, lol!
I do a Rock Show, but I have never been afraid to veer into other areas of Music.
Pour yourself a hot or cold drink, kick off your shoes, relax and join me as we get into the Time Machine and re-visit or meet for the first time some great Old Time Movies.
Back to the Golden Age of Hollywood!

Here are the links to some Black & White And Color Music, at Mike Pell Rockollections:

I am not French, he's NOT funny, LOL!

I wouldn't want a steady diet of Westerns, but there are some Classics in the genre, just damn good stories!

Well I am annoyed by DeNiro (who stopped acting in the 80's and now simply cashes a check for silly comedies), Adam Sandler, Danny Glover, to name a few.

For the DEAD ones, I can't watch a Shirley Temple movie, I get NUTS, LOL!

Jerry Lewis is NOT funny, ah the list is too long!

Yeah...westerns for one. Second....he annoys the crap out of me and I believe I have only seen one of his movies in my lifetime and that WILL NOT change.

Years ago I could take him or leave him.

But now I realize how good he really was- as in The Searchers, The Shootist, the John Ford Trilogy and more.

And especially with what a shithole Hollywood has turned into!

You have a reason to DISLIKE him?

Yeah, but then there was John Wayne as well.

Yuck. Twice in a week I had to mention him.

I probably have spoken about that TCM at other times.

But this is over EIGHT years old, hard to believe.

I never ended this Series, I just STOPPED, LOL!

This sounds familiar, especially with that TCM stuff.