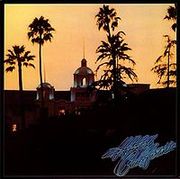 The Eagles are an American rock band formed in Los Angeles, California in 1971 by Glenn Frey, Don Henley, Bernie Leadon and Randy Meisner.

Eagles (currently formed by vocalist/drummer Don Henley, vocalist/guitarist Glenn Frey, guitarist/vocalist Joe Walsh and bassist/vocalist Timothy B. Schmit) are an American rock band that was formed in Los Angeles, California in the early 1970s. With five Number 1 singles and six Number 1 albums, the Eagles were one of the most successful recording artists of the 1970s. At the end of the 20th century, two of their albums, Their Greatest Hits (1971–1975) and Hotel California, ranked among the ten best-selling albums according to the Recording Industry Association of America.

While impeccably structured songs (with Jackson Browne and J.D. Souther as occasional writting partners), excellent vocal harmonies (all members have vocal duties) and perfect production (with Irving Azoff as their reference) proved an unbeatable commercial formula, the band’s recording and touring schedule gradually slowed until they broke up in the fall of 1980.

Each of the members subsequently pursued a solo career, with Don Henley’s the most successful commercially and critically. In the ’90s, after what they considered a "14 year break", the band’s sound was frequently cited as an influence by young country stars, many of whom contributed tracks to the album Common Thread: The Songs of the Eagles (#3, 1993), which won Album of the Year at the 1994 Country Music Awards. That same year, the Eagles revival culminated in the band’s reunion tour and album. However at the same time, the band also became the butt of jokes, most famously in the Coen brothers movie, The Big Lebowski.

You need to be a member of EAGLES to add comments!

It was on last night, ended up watching about 2&1/2 hours of it again with the wife.  And she's not a particular fan, other than a couple of the hits, but she enjoyed it as well.

I haven't watched it, but I would watch in pieces too.

Tivo'd it and watched it in chunks. It was interesting, better than I thought it would be.

Yep.  Watched it over two weekends, thanks to the DVR.

Anybody see that Eagles show on Showtime?

Going through the Eagles catalog now.  I'm building a playlist for this page that will incorporate the music of the band itself as well as solo music and special appearances.

Hey man, you interrupted me.

I was busy being fabulous, lol!
Mike