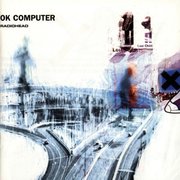 Radiohead was one of the few alternative bands of the early '90s to draw heavily from the grandiose arena rock. But the band internalized that epic sweep, turning it inside out to tell tortured, twisted tales of angst and alienation.

Radiohead are an English rock band from Abingdon, Oxfordshire, formed in 1985. The band consists of Thom Yorke (vocals, guitar, piano, beats), Jonny Greenwood (guitars, keyboards, other instruments), Ed O'Brien (guitars, backing vocals), Colin Greenwood (bass, synthesizers) and Phil Selway (drums, percussion).
Radiohead released their first single, "Creep", in 1992. The song was initially unsuccessful, but it became a worldwide hit several months after the release of their debut album, Pablo Honey (1993). Radiohead's popularity rose in the United Kingdom with the release of their second album, The Bends (1995). Radiohead's third album, OK Computer (1997), propelled them to greater international fame. Featuring an expansive sound and themes of modern alienation, OK Computer has often been acclaimed as a landmark record of the 1990s.
Kid A (2000) and Amnesiac (2001) marked an evolution in Radiohead's musical style, as the group incorporated experimental electronic music, Krautrock, post-punk and jazz influences. Hail to the Thief (2003), a mix of guitar-driven rock, electronics and lyrics inspired by war, was the band's final album for their major record label, EMI. The band's first six albums, released via EMI, had sold more than twenty-five million copies by 2007. Radiohead independently released their seventh album, In Rainbows (2007), originally as a digital download for which customers could set their own price, and later in physical form to critical and chart success.
Radiohead's work has appeared in a large number of listener polls and critics' lists. In 2005, Radiohead were ranked number 73 in Rolling Stone's list of "The Greatest Artists of All Time". While the band's earlier albums were influential on British rock and pop music, musicians in a wide variety of genres have been influenced by their later work. 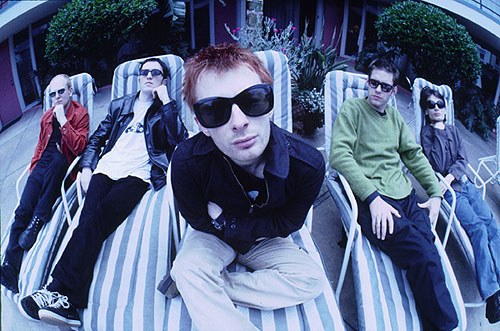 
The musicians who form Radiohead met while attending Abingdon School, a boys-only public school in Abingdon, Oxfordshire. Thom Yorke and Colin Greenwood were in the same year, Ed O'Brien and Phil Selway were one year older and Jonny Greenwood two years younger than his brother, Colin. In 1985 they formed the band "On a Friday", the name referring to the band's usual rehearsal day in the school's music room. The group played their first gig in late 1986 at Oxford's Jericho Tavern; Jonny Greenwood originally joined as a harmonica and then keyboard player, but he soon became the lead guitarist.
Although Yorke, O'Brien, Selway, and Colin Greenwood had left Abingdon by 1987 to attend university, the band continued to rehearse often on weekends and holidays. In 1991, when all the members except Jonny had completed their university degrees, On a Friday regrouped, began to record demos such as Manic Hedgehog, and performed live gigs around Oxford. Oxfordshire and the Thames Valley had an active indie scene in the late 1980s, but it centred around shoegazing bands such as Ride and Slowdive; On a Friday were never seen as fitting this trend, commenting that they had missed it by the time they returned from university.
Nevertheless, as On a Friday's number of live performances increased, record labels and producers became interested. Chris Hufford, Slowdive's producer and the co-owner of Oxford's Courtyard Studios, attended an early On a Friday concert at the Jericho Tavern. Impressed by the band, he and his partner Bryce Edge produced a demo tape and became On a Friday's managers; they remain the band's managers to this day. Following a chance meeting between Colin Greenwood and EMI representative Keith Wozencroft at the record shop where Greenwood worked, the band signed a six-album recording contract with the label in late 1991. At the request of EMI, the band changed their name to Radiohead, inspired by the title of a song on Talking Heads' True Stories album.

Radiohead recorded their debut release, the Drill EP, with Chris Hufford and Bryce Edge at Courtyard Studios. Released in March 1992, its chart performance was very poor. Subsequently, the band enlisted Paul Kolderie and Sean Slade—who had worked with US indie bands Pixies and Dinosaur Jr.—to produce their debut album, recorded quickly in an Oxford studio in 1992. With the release of the "Creep" single late in the year, Radiohead began to receive attention in the British music press, not all of it favourable. NME described them as "a lily-livered excuse for a rock band", and "Creep" was blacklisted by BBC Radio 1 because it was deemed "too depressing".

You need to be a member of Radiohead to add comments!

Comment by Niels (Mod) on September 24, 2010 at 5:38am
I've added most of "The Bends" and "OK Computer" on a Mixpod.player on this site. I have no idea, if you have to listen a few times, before you can hear the quality of the music, but believe me, those two albums, and ESPECIALLY "OK Computer" are pure genious!! Too bad, just like U2, Radiohead are not very good these days. To much experimentel music imo.