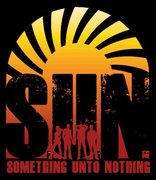 S.U.N.
(SOMETHING UNTO NOTHING)

In the beginning, the members of S.U.N. agreed that in order to write the best, trend-free music they could, they needed to get away. So, in the mountains of Canyon Country, they found an old, deserted shack. They got supplies to last them 2 weeks and set out to write a complete album.

When they left the shack, they had all the music you are now experiencing. For better or for worse, this is what it is, and that in itself is an accomplishment they are beyond proud of.

So... take the journey with them. Take the chances with them. They don't know where they are going, but they know they won't rest until the goal is finally realized…to become…something unto nothing…

WHO:
Sass Jordan: V.O.T. (Voice of Truth)
Sass has a voice that you can only get when you are privy to witnessing a total breakdown of all senses and a complete overload of imagination with an acceptance of why we are here. It's been said that she had to be an angel in another life, put into battles with demons in a black hole that sent her behind the sun into the truth. Over those 100's of battles, she has developed a keen sense of why, how and what.

On this planet, Sass is known as one of the most badass singers ever. She can't help what she does and she can't force it so she joined up with the other members of S.U.N. to prove there is even more to her than we already knew.

Winner of Billboard's Best Female Rock Vocalist award, she has toured and/or worked with many musical heavyweights, including Aerosmith, Alice Cooper, Cheap Trick, Van Halen, Carlos Santana, The Rolling Stones, Jeff Healey and Joe Cocker, whom she also sang a duet with on The Bodyguard soundtrack, which sold more than 27 million copies worldwide. Her songs have been featured on numerous TV shows, including Melrose Place, Party of Five, Baywatch and Knightrider.

Sass was a judge on for 6 years on Canadian Idol. She is the real deal, and has nothing to prove to anyone except herself. You listen to S.U.N. and you really see what Sass is… or do you? Ya better listen .

Brian Tichy: Guitar
From the dark depths of a basement in New Jersey comes a ball of energy and confusion. Brian's first goal is to write the next badass riff, and then get together with S.U.N. to complete the idea. Brian writes off the emotions and experiences of the past and present while allowing everyday occurrences to get in the way; in a good way.

Brian's always been a drummer who loves guitar. Brian has written many a song with Billy Idol, including Billy's 2005 comeback single/video, 'Scream'. Brian writes prog metal with keyboard wiz Derek Sherinian. Brian writes power metal for Mastersource Music Co. that gets all his songs in TV's biggest shows including CSI, Law and Order, and many movies like 40 Yr Old Virgin, Diary of a Wimpy Kid, and Balls of Fury.
Tichy has had some fun hitting drums for some of the world's biggest artists like Ozzy Osbourne, Whitesnake, Foreigner, Billy Idol, Steven Tyler, Slash and Don Felder among many others.

Michael 'Denim' Devin: Bass
Growing up on the outskirts of Boston in Leminster, MA, bred on 70's rock gave Michael 'Denim' all the tools he needed to become the guy everyone wants to play with. Longtime friends nad band mates with Tichy gave them the synergy needed to effortlessly write and record music with Sass. Through ups and downs, and in's and out's, they move forward, questioning everything ... and then forgetting what the questions were, because it doesn't matter. They relate through a common bond of Led Zeppelin, AC/DC, Rush, Black Sabbath, The Beatles and The Who - with a constant piss take of all that is deemed 'hip' and 'cool'.

Michael Devin can't be put into a box. Everyday is a new experience, and Denim's playing expresses that idea. You'll get what you want, but then he'll give you something more - a little gift, if you will, that you will receive happily with open arms as he adds to the music in a way that most would consider too risky. Ask him a question about music and you will get an answer you will take home with you. But you won't write it down, because it will be etched in your brain forever.

Some people know this .. especially those he has played with .. from Kenny Wayne Shepherd, to George Lynch and Lynch Mob, Jason Bonham and his Led Zeppelin Experience, all the way to the newest version of Whitesnake and the nearly 40 drummers plus guest musicians that have played with him at the 4 John Bonham Tribute Bashes. They ALL know this is the guy you want playing the bass. But he knows that he needs to move and groove, and then groove and move ..well ... you get the point ..

Tommy Stewart: DRUMS and anything else that makes noise.
Ok... what do you say about Tommy?? How bout. "Tommy really knows how to kick the s**t out of the drums. His groove is superb. His effortless energy leaves you wondering how he can keep up that pace and hold down the groove. And he ain't even trying! It's just a gift he has that should be witnessed regularly on this planet as a source of inspiration to all those also trying to find their niche. Tichy says, "I saw Tommy play and said, "I wish I looked that loose and sounded that tight when I played." Tommy has toured the world with Godsmack, Fuel, Everclear, Lo-Pro, and Gary Cherone. Tommy lays it down and allows the rest of S.U.N. to bounce off that rhythmic trampoline with minimal thought!!!! Here here!!!

WHY:
To simply experience new levels of emotion…to give fans of music something new that was created without a formula…oh…wait…that's a lie…the formula was to KICK ASS AND LEAVE A MARK!!!

Listen to the music… read the lyrics… spread the word… we will always be here… Something unto nothing again.

You need to be a member of S.U.N. to add comments!

It says you can buy a physical copy, but that also says it's manufactured on CD-R on demand.

Download only? Crap, guess I won't be getting that.

I checked Amazon earlier.  It's download only, and it's actually one new song from them, one studio cover (Neil Young), one live cover (Paul McCartney) and a radio edit of Delirious Nomad.  I think I'm gonna download it tonight.

They've supposedly got an EP for "Nomad" with three new songs out now.