Welcome to my new blog.  I'm ripping off TageRyche's Cassette Chronicles, but at least I'm crediting him.  This will be a recurring blog covering my bargain vinyl purchases only, no CD's or other types of media.  I'll listen to a few of the albums and report here what I got and how much I paid.

Savoy Brown was a British Blues Rock band, and Hellbound Train is the band's eighth studio album.  It's pretty much a straight up blues rock album, with a touch of soul maybe?  It's nothing spectacular, but Lost And Lonely Child, Troubled By These Days and Times and It'll Make You Happy are decent songs.  Hellbound Train is worth the price of admission.   It has an extremely abrupt ending, almost to the point of being scary.  I stumbled onto it on Youtube a while back and it's the reason I picked the album up.

The next to last song is scratched several times near the end of the track, but those are the only scratches on the entire album, the rest of it plays well.  There is a lot of his and pop throughout. The cover is in fair condition and is a gatefold, but it does have Kim Simmonds' (the founder and guitarist) autograph on it.  I have no idea if it's legitimate. This one was purchased strictly for it's cover.  I had no idea what it was musically.  There was nothing songwise of note other than the album closer (Stone Cold Sober), though the guitar playing was very decent, performed by Geoff Whitehorn.  The production is not good, as it sounds somewhat like the band is playing in a large steel drum.  The singer (Terry Wilson Slesser) is average at best, occasionally sounding like Tom Johnston from the Doobies.  I'm not at all surprised that this band never stepped out of obscurity.

The band's backstory is pretty cool.  Apparently, Paul Kossoff's first solo album after Free disbanded was titled Back Street Crawler.  Kossoff supposedly was a founding member of the band by the same name, but he died shortly thereafter.  The remaining band members moved on to another label and management and tried to recruit Mick Taylor, then Peter Green for the guitar slot to replace Kossoff, but they both declined.  They settled on Geoff Whitehorn and due to his obscurity, they were dropped from their label.  They were picked up by Epic/CBS and recorded two studio albums for their place in music history.

The album did produce a minor hit in the United States. Stone Cold Sober managed a number 65 showing on the Billboard Hot 100.  The record itself is in good shape, with only one scratch on the lead off track.  The cover is in fair shape, no tears or cut out but it does have a some wear around the edges. 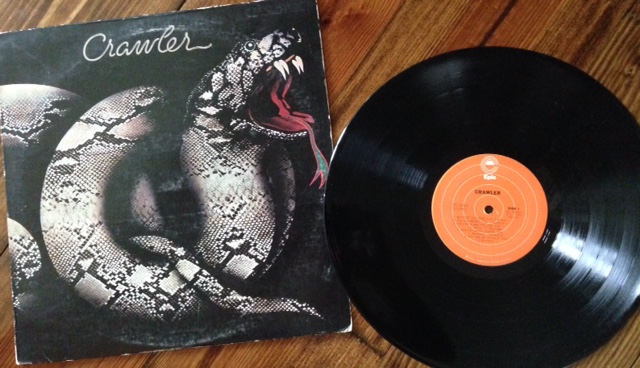 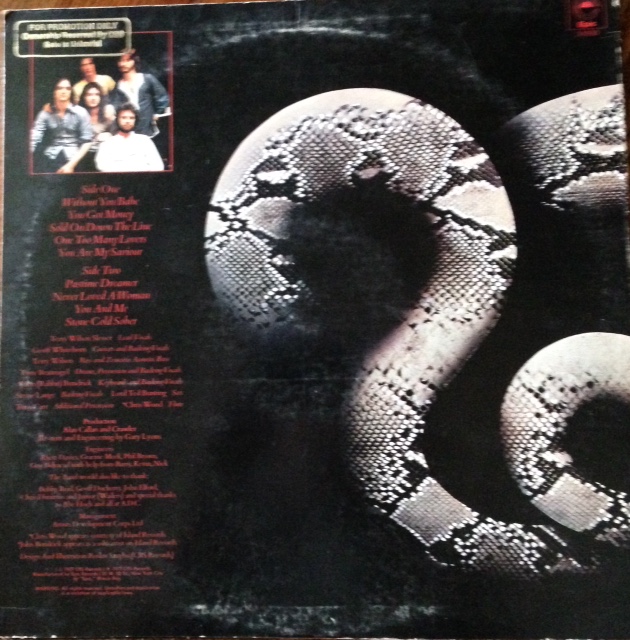 Here's another one that I picked up on the strength of the cover.  Of course, then I flipped it over and saw the name Ginger Baker and decided I'd definitely pick it up. The cover again is in fair shape with no tears or cutout, but it does show years of wear around the edges. The record itself shows a good bit of wear and some scratching, but surprisingly it plays very well.

The Baker Gurvitz Army features the aforementioned Ginger Baker on drums and vocals, Adrian Gurvitz on guitar and vocals and his brother Paul Gurvitz on bass and vocals.  The vocals all the way around are average at best, but I can't tell you who sings what.  Adrian Gurvitz is a very good guitarist.  I was in the record store yesterday and mentioned this album to the owner, who whipped out a thirty dollar copy of the debut from the band The Gun (a previous band that both Gurvitz brothers played in) and put it on the record player.  I was quite impressed.  Not thirty dollar impressed, but impressed none the less.

Overall, the album isn't remarkable, but it does have some moments.  One of those moments is an excessive, drawn out drum solo by Baker that occurs in the middle of Memory Lane.  It is not necessary.  I didn't say they were all good moments.  Also, though this guitar playing is very good, it isn't out front like The Gun album I heard.  I'm guessing this was a Ginger Baker show.  But it does touch on heaviness/metal and a pinch of prog (time changes and instrumentals) here and there. 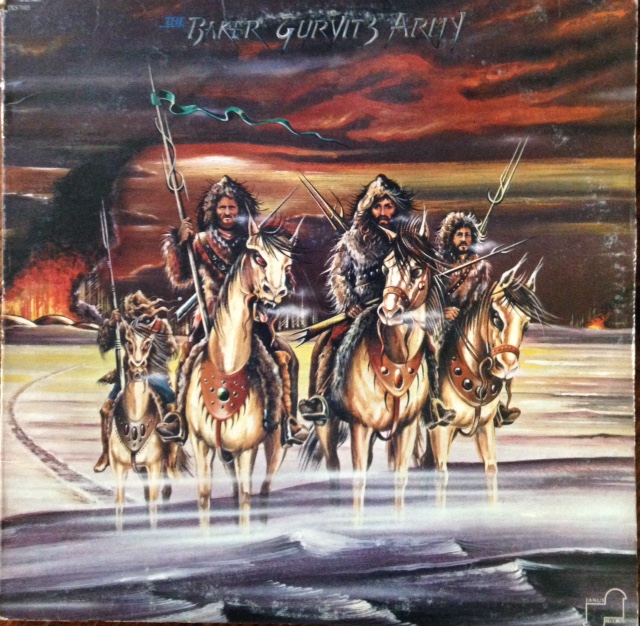 Wow, that is a killer store!  I'd sure love to walk through it.  They probably don't have much dollar vinyl though.

It's funny, when I'm rummaging through the dollar vinyl bins, I'm not looking for that rare piece that slipped through somebody's fingers, I'm looking for that piece I can get for a dollar that isn't scratched too much.  I don't mind the occasional scratch, but I want it to be listenable, even if I'm only paying a buck.

I usually go through and pull out a huge stack, say 50 albums.  Then I go back and pull all of the albums out of their sleeves and check to see if they are too scratched up to purchase.  I typically put back at least half of what I pulled out because of this, sometimes even more than half.  He had several I really wanted this week but they were just too scratched to waste a dollar on.

Don't blame you. It's a great way to get acquainted with albums you never heard or weren't able to find/buy before.

I'd do the same if there was a decent used record store around my place with affordable prices, but these days I only see old vinyl's at garage sales. And let's just put it this way, the selection would probably impress Mike Pell, but not me.

Man, I miss those good old days I spent hours digging through vinyls. Last time I seen a truly great place was years ago in Calgary. They had probably every LP ever released on endless shelves packed from top to bottom. When I say top, I mean shelves higher than I can reach and when I say bottom, I mean shelves lower than I care to bend down. Also the space between the shelves wasn't more than a feet wide. I don't think I could fit in there anymore.

Hey I just remembered the name of the store: Recordland and look I found a youtube upload of the place. Check it out if you will. Great GREAT selection, knowledgeable staff. They had lots of CD's too (stacked the same way)

If you ever stop by Calgary and you have... I don't know... a week to spear, it's worth checking out.

Thanks TR.  It may be sporadic.

Yngve, what I meant by my 30 dollar comment was that it wasn't worth 30 to me.  I'm a cheapskate when it comes to purchasing vinyl.  And that's why I do it.  I'm not searching for that long lost piece, though it wouldn't hurt my feelings if I found it.  I want to hear these albums, but I don't want to spend multiple greenbacks to do so.

But that album by The Gun was sounding very good.

I feel good that I had an idea good enough to be ripped off. :D

I haven't listened to any of these albums so I can't really comment on them. I know that I had thought about doing a series on the vinyl albums I have purchased at my friend's record shop. But I decided that it was one writing project too many.

I look forward to reading more posts from you!

Man, I've been clicking on those covers with no rewards.

Seriously, I would love to hear at least few tunes from each album.

I'm familiar with all three Artists, but I don't have any of these three releases.

Savoy Brown -- I'm guessing the owner wasn't very attached to the album. What can you do? Sometimes, that's the way the cookie crumbles. Who did that comic book art inside the gate-fold?

Crawler -- Geoff Whitehorn is a pretty good blues guitarist. I remember buying a British Guitar Magazine in the 90's and he was a constant contributor. Each issue came with a complimentary CD, which had an odd songs from new releases like Joe Satriani as well as some tracks to practice different styles of Rock and Whitehorn would put down the rhythm guitars for them. I sold those magazines long ago, so I can't remind myself now of his playing, but I do remember his name, so he must have been good.

The Baker Gurvitz Army -- Really? The guitar playing on the first Gun album is not $30 good. I'm assuming he played you Race With The Devil and in my opinion that's a $1.000.000 guitar riff, lick and solo right there. You are a though costumer, but truth be told I heard and like the Girlschool version better myself, so perhaps the GUN's original is only worth $500.000. Still trading quite a bit lower on your market. Do me a favor, if you will, not demanding or anything, just please check out the Girlschool version of Race with the Devil and let me know what's that worth to you? I need to update portfolio.

Oh, speaking of Baker Gurvitz Army I don't have anything from them, but I do have the Classic ballad from Adrian Gurvitz on one of my Various Artists CD.