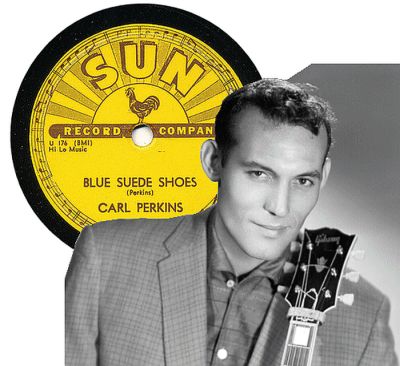 I was busy this week so this is an old show, I mean an OLD show, lol!
Among all my favorite kinds of music, Rockabilly has always been right up there.
There is a raucous letting go that appealed to me as a kid, and still does it for me.
Among the names that should always come up regarding this kind of Music is Carl Perkins.
While there may be more familiar names, there are very few better.
Here's what Charlie Daniels said about him:
"Carl Perkins' songs personified the rockabilly era, and Carl Perkins' sound personifies the rockabilly sound more so than anybody involved in it, because he never changed."
Perkins' songs were recorded by artists (and friends) as influential as Elvis Presley, The Beatles, Jimi Hendrix, and Johnny Cash, which further cemented his place in the history of popular music.
Called "the King of Rockabilly", he was inducted into the Rock and Roll, the Rockabilly, and the Nashville Songwriters Halls of Fame; and was a Grammy Hall of Fame Award recipient.
So my man Carl clearly has the pedigree.
Let's Rock!

Here are the links to some Great Old Sun Records, at Mike Pell Rockollections:

Man you do hate BS, LOL!

He annoys me too now, but I'll play him of called for.

That was the old Theme.

I wanted to play Crawfish by Elvis again, LOL!

Now I am confused with all the double whammies- don't be NEGATIVE, LOL!

And the exit song sucks as well.

At least you didn't play Elvis. That would have been a negative double-whammy.