After being one of what I'm sure is only a handful of people who found the last Armored Saint album Win Hands Down (You can read that review HERE!) mildly disappointing, I still found myself completely energized when the impending release of Punching The Sky was announced.

The first song released in advance of the official album sale date was "End Of The Attention Span", which was quickly followed by "Standing On The Shoulders Of Giants". These songs certainly whetted the appetite that much more.

So much so that I ordered the special edition version of the album direct from Metal Blade Records. So not only did I get the full album, but I got the version with the 3 extra tracks and a bonus DVD featuring the full set Armored Saint did at the 2018 Rock Hard festival. Add in a T-shirt with the album art on it and how could I not get this package considering how I feel about the band, right?

But I was a tiny bit worried that I might not like what I'd hear based on my mediocre reaction to Win Hands Down. At first listen, I feared I was right. There were some songs that didn't capture my imagination outright. But that's why you give an album more than one listen before writing a review. To combat simple stupidity on the part of the reviewer.

The opening use of the uileann pipes (provided by Patrick D'Arcy) give the song an immediate sense of the epic! The song starts out slow and then rises to a fast attack kind of pacing. And between the immense musical soundtrack and the drop dead awesome nature of singer John Bush's performance, this just got me all fired up. The song has a killer chorus that became instantly memorable:

"As I grow older I lift this boulder

With strength I chip it away

Standing on the shoulders of giants

Punching the sky every day

As life gets colder, flames they smolder

Climb so I can survey

Standing on the shoulders of giants

And that is just the first song on the album!

With "End of the Attention Span", the band provides a commentary on the state of things today. Doing it such a way to not let what they are talking about overwhelm the song itself helps give an extra bit of life to the track. The song starts out a tiny bit slow but that quickly changes and the Saint roars onward...to the song "Bubble". This one moved fast to be sure, but felt like there was a little bit of restraint to the start of the song. It has a real killer feel to it overall.

As I mentioned, I had a little trouble with some songs at first. For whatever reason, I seemed to have missed something before going back and really digging into each of the songs that didn't seem to have the same kind of fire.

One of those songs was "My Jurisdiction". My notes just said "Eh" at first. But as I got into the song I found that first impressions can definitely be wrong. The song grew on me a lot.

"Lone Wolf" was another track that for reasons passing understanding didn't appeal to me at first. And I'm just going to admit to a complete failure on my part here. I say this because the song has a hypnotic appeal to it. It rocks pretty hard but also seduces you into wrapping yourself up into the performance. Normally a title like "Lone Wolf" would be enough to draw me in with the images of solitude it conjures up, but what I found was having to put in some extra work to discover what makes a song so appealing so richly enhances the appreciation I now have for it.

Of course, you have songs that hit you between the eyes from the start, just blowing you away as you realize just how good they are even as you hear them the first time. The way drummer Gonzo Sandoval powers the song "Do Wrong To None" with just a heavy rat-a-tat-tat delivery behind the kit helps give the song a pure hard-charging metallic vibe. The guitar solo was pretty intense as well.

Not generally given to messing around looking for a direction, the band raises that particular art form up a notch on "Missile To Gun". Highly aggressive musically and fueled by an astoundingly brutal (in a good way) vocal performance from Bush, this is another one of the highlights of Punching The Sky. Meanwhile, "Fly In The Ointment" tends to move a bit more deliberately but still packs plenty of heavy punches for you.

Before I talk about the closing tracks of the main album, I should mention that the three bonus tracks are pretty invigorating too. Both "For The Sake Of Heaviness" and "Underdogs" are from the band's performance at the 2019 Bang Your Head festival in Germany. Fittingly, both are incredible crunching performances. And given my personal love of the Raising Fear album, hearing "Underdogs" in a live setting gave me a real sense of elation. The final track included as a bonus cut also comes from the Raising Fear album. The song "Isolation" is a pretty intense song it its original form but when you are stuck at home because of worldwide events, this raw performance billed as being "live from isolation" makes the song hit home a bit more.

As for the last three songs on the album's main section, I felt like kind of a heel for not being initially drawn to "Unfair". This is the song I'm most glad to have gone back and really listened to. The song has a dedication to it and if I hadn't listened again, it would've felt like I was being welcomed into someone's home and then took a leak on their rug. Instead, upon further reflection, the very slow and spare manner in which the song starts off ends up bringing the song home a lot more than I first thought. Stylistically, the song grows to a more aggressive tone towards the end of the track and becomes far more of a dramatic performance that I would've missed out on had I not taken more of a listen in the first place.

Meanwhile, you gotta love the fast pace of "Bark, No Bite" and "Never You Fret". The former sounds a bit smoother in the main lyrical passages but there's a definitive growling edge to the song during its chorus. On "Never You Fret", the vibrantly aggressive feel to the music and yet another high class but hard-edged vocal performance brought things to an explosive head and pushed the album over the top for me.

Yes, it may have required a little bit of extra work on my part to appreciate every song on the album. But that's what makes the experience of an Armored Saint album so rewarding in the end. John Bush, Gonzo Sandoval, bassist Joey Vera (who produced the album) and so much in the way of incredible guitar playing from Jeff Duncan and Phil Sandoval just seem to have the intrinsic ability to provide one incredible work of metal music after another. This album, as it turns out, is rather brilliant in both conception and execution. May Armored Saint be Punching The Sky for many more years to come! 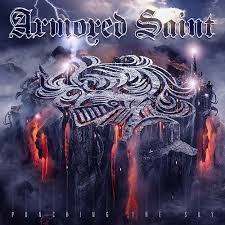