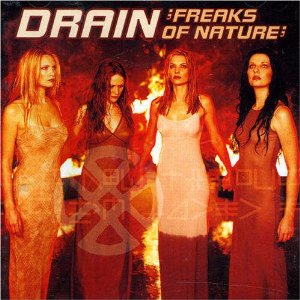 Sadly, all things must come to an end. This being the end of March, our salute to women in rock has come to a close. For now!

We tried to open everyones mind to different typed of music featuring women and I hope we MAYBE introduced you to something that you may not have heard and thought of listening too. Maybe not, but at least we tried!

Thanks to Gordon, my final March album is back to the rawk everyone wants, "Freaks Of Nature" from Drain S.T.H. released in 1999.

This is the second, and last, release from the all female band from Sweden. Reading thru the bio on allmusic.com, they say it's because the women are too gorgeous as the reason why they didn't hit it big. Maybe so, but maybe some countries are a little closed minded when it comes to hard rock?

The first album, "Horror Wrestling", though quite good, had the tendency of everything kind of sounding the same. Slow, plodding music (killer remake of "Ace Of Spades", slowed down like you would not believe) while this album has different styles (even some RAP!) and it is a better album because of this (no, not the RAP part).

After this album they called it quits with singer Maria Sjöholm marrying some guy with the last name of Iommi, while the rest formed a new band called Superfix but I don't believe they've released an album.

MSoTW: Still have last week's open, this week is tough. But it's from America if that helps at all? 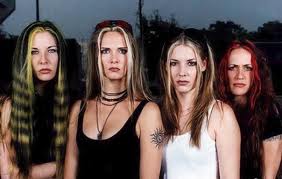 I don't know what the Mystery song is, but I really like it!!!  Good Stuff!!!

Drain - Freaks Of Nature : I didn't really care for the first song, the second song was too repetitive & the third song had the rap & not even good rap! I was about to abort, but a funny thing happened! I started liking it!  From the 4th song to the end, not bad!

I dig this record, and thanks Jon for letting some others hear it for their first time, probably! The picture on the album is a much better picture than the one added! They look all mean, pissed off, and SKEERY in the posted picture!

The mystery song is pretty good...good vocals for sure, and the "breakdown" part in the middle is kind of funky, and strange...but I like it!

But it's funny, Mike likes the 4th through the end, and my favorites are the first six tracks. Very heavy, but very melodic record. I think the vocal work is very good.

Vocalist has a Joan Jett sound to her voice and although the music is totally different, thats what I hear...  While I 'm on weird things.  I also hear the production which reminds me of KISS' Carnival of Souls, again not the music but the production. (And someone had to work KISS into the discussion)

THe music now thats another thing..  kinda depressing to listen to.  For the most part its too dark for my taste.  Dont know why but I kinda liked The Bubble Song, followed by RIght Through You and there you have CD's best offerings.

'I kinda feel depressed after listening to it, and not havng a freaking clue who the MSOTW is aint helping me at all!

Think female in Superman...kind of.

Permalink Reply by Mike Mills on April 5, 2012 at 9:16am
Scott proves once again that no matter what we discuss on the CRB, it always resorts back to Kiss!!!