New Rick Springfield, Songs For The End Of The World. 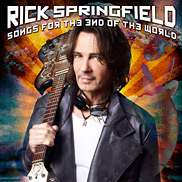 For all his accomplishments as an actor, a best-selling author and the subject of a recent documentary, Rick Springfield's first love has always been music, since the first time he picked up a guitar at the age of 12 in his native Australia.

That passion for writing and performing songs, as well as playing guitar, comes through loud and clear on his new Universal Music Enterprises album, Songs for the End of the World, which comes out on October 9. It is his first album since 2008's UMe release, Venus in Overdrive.

Collaborating on songs like the three-chord rocker "I Hate Myself," the anthemic "Our Ship's Sinking," "Love Screws Me Up" and "Depravity" with his bass player Matt Bissonette, Springfield sets his sights on the possibilities of escaping the current, apocalyptic world situation in our closest relationships. In doing so, he employs the kind of self-effacement and ability to poke fun at himself as he demonstrated when putting his dog Lethal Ron on the cover of Working Class Dog or spoofing his image by playing a sleazy, drug-and-sex-crazed version of himself on Showtime's dark comedy Californication. John Waite and Mr. Mister's Richard Page appear as backup vocalists, along with Rick's original guitarist, Tim Pierce, who hasn't played on record with him since 1999's Karma.

I'm looking to this, but I'm not initially impressed with the first tune that was released.  Maybe I'll like it better in the context of the album.