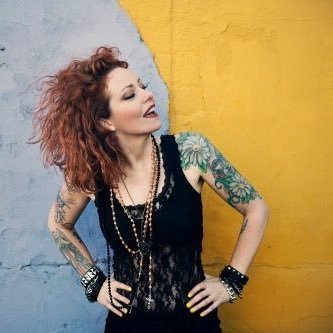 Anna Maria van Giersbergen (born March 8, 1973, Sint Michielsgestel), known artistically as Anneke van Giersbergen, is a Dutch singer, songwriter, guitarist and pianist who became known worldwide as the lead singer and songwriter for the Dutch progressive/alternative rock band, The Gathering, between 1995 and 2007. Currently she has a solo career. The project was originally called Agua de Annique, but now goes by her own name.A frequent collaborator of Arjen Anthony Lucassen, she portrayed main characters in the albums Into the Electric Castle, 01011001 and The Theater Equation by his project Ayreon. In 2014 they created a new band together, The Gentle Storm, with a first album titled The Diary released in 2015.Van Giersbergen has also worked with Devin Townsend, Within Temptation, Anathema, Lawn, Farmer Boys, Napalm Death, Moonspell, Novembers Doom, Globus, Giant Squid, and many other artists and projects.

IMO, Anneke has one of the absolute most sexy voices in rock (and is also nice to look at). I really only listen to her through the Devin Townsend-albums, I listen to, and sometimes she gets to sings lead on more than one track on the albums (DTP). On the new DTP-album, she almost only sings backing-vocals, and in a way, I think that was good thinking by Townsend. Something has to be different from album to album.

The Gathering is a Dutch alternative rock band, founded in 1989 by brothers Hans and René Rutten and vocalist Bart Smits in the small city of Oss, North Brabant.The Gathering earliest releases were categorized as atmospheric death/doom metal, inspired by such underground acts like Celtic Frost and Hellhammer. In 1998 with the release of their 5th studio album, How to measure a planet?, they had a major shift in musical style, with the group acknowledging the growing influence of shoegaze, post rock, experimental rock and the more ethereal sounds of 4AD bands, such as Dead Can Dance, Cocteau Twins, as well as Pink Floyd and Massive Attack; they expanded their sound, which acquired characteristics of progressive, alternative, and trip rock and gained success and recognition beyond the European borders. The group continue to expand upon the experimental nature of their music.In August 2007 Anneke van Giersbergen left the group to focus on her solo project Agua de Annique. On 12 March 2009, The Gathering announced that their replacement vocalist was Silje Wergeland (Octavia Sperati). Their most recent album, Disclosure, was released on 12 September 2012.On 17 January 2014, the band announced on their Facebook page that they decided to take a break from recording and touring, and also that Marjolein Kooijman left the band. To celebrate the band's 25th anniversary, a show featuring all the current and past members in the band's history took place on 9 November 2014.

Addicted is the second of six albums in the Devin Townsend Project series, each featuring a different lineup and theme. Addicted was written and produced by Townsend. The album features vocals by Townsend along with Anneke van Giersbergen, a former member of Dutch band The Gathering. Brian Waddell and Ryan Van Poederooyen of the former Devin Townsend Band play bass and drums, respectively, while Mark Cimino plays guitar alongside Townsend. Recording for the album began May 6, 2009. The next album in the series is Deconstruction, which was released on June 20, 2011. This is my favorite DT-song.Unfortunally the video was removed, so this has to do, becuase I need this song to be here, my absolute favorite Townsend/Giersbergen-song. (You have the oportunity to see the video here: http://www.youtube.com/watch?v=FZLgXOz1om4

Another song from the "Addicted-album", and from a concert in London, just recorede a week before I saw the band in Copenhagen, unfortunally without Giersbergen.

THE GENTLE STORM - HEART OF AMSTERDAM

The Diary is the first album by symphonic metal/folk rock band The Gentle Storm, consisting of composer and guitarist Arjen Anthony Lucassen and singer and lyricist Anneke van Giersbergen. It was released on March 23, 2015 in Europe, and the following day in the US.A concept album about a love story set in the 17th century, The Diary consists of two discs, each with the same track list: the "Gentle" side of the album consists of acoustic, softer songs, while the "Storm" side of the album is made of heavy metal versions of the songs with symphonic and progressive elements.

THE GATHERING ... Youve read my thoughts on Devin Townsend many times before as you and Jon love the guy and me? Well... notsomuch. So this has that Mid-Evil drone of EuroNuMetalRock, whatever it is, but its not interesting to me at all. Much like ScottRock irks you, this has the same effect on me. I will give you the fact that she's cute however

AQUA DE ANNIQUE - WONDER ... eh, a ballad in the same droning style, theres not much variation on the theme here. Again cuite though!

I'm gonna have to take this in small doses.

I know you think highly of this lady because you mention her regularly.  Let's see:

Leaves - Well, she definitely has some pipes.  And I agree with the comment regarding her attractiveness.  I don't think this song is particularly bad or good.  It really doesn't go anywhere though...

Wonder - This is a pretty song.  Her voice shines here, and the piano accompaniment is terrific.

Supercrush! - Okay, maybe Scott was correct about DTP.  This does sound like it would fit right in with the songs on his latest album that was just in NMC.  I think it's the very thick sounding production.  But in reality, the song does nothing for me.

Bend It Like Bender - Not good.  At least DT is not good.  AVG sounds pretty good.  Sounds like there is a lot of pre-recorded stuff here, not that that's a crime.  Oh well, looks like they had fun.

Feel Alive - Meh.  Not terrible, and she can sing quite well, but not interesting to me.

Heart of Amsterdam - I feel like river dancing!  Again, I'm not sold that this is good, though it's not awful.  Is that her with the dark hair?  Guess it is.  Not sure if I prefer her as a blonde or a brunette.

Well, this has not convinced me in the least that I should be listening to this style of music.  But that probably doesn't surprise you.  Different strokes...