VIDEO'S OF THE WEEK - KEITH MOON 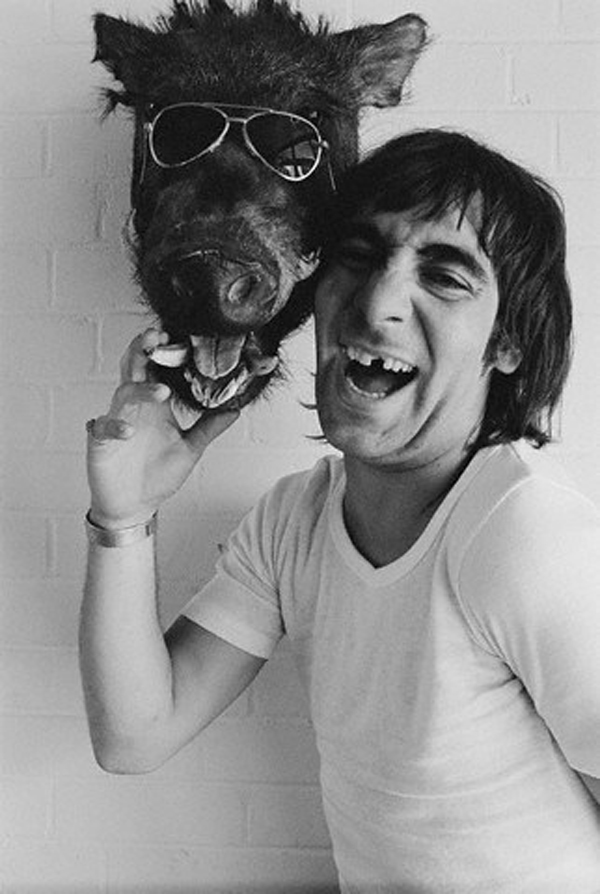 I'm just about finished reading a book about Keith Moon, called "Dear Boy", roughly 600 pages, and a very good and off course at times very funny book. Moon is in my top 3 of drummers (the other 2 are Bonham and Grohl). I can't say, that I remember when he died, but I do remember listening to "Who Are You" and looking at the cover, thinking that he had just died a few months back. IMO, The Who should never had continued without Moon, and reading the book, it's very clear, that The Who wasn't The Who (or The High Numbers) at all before Moon sat behind the drums.

"Moon's favourite stunt was to flush powerful explosives down toilets. According to Fletcher, Moon's toilet pyrotechnics began in 1965 when he purchased a case of 500 cherry bombs. He moved from cherry bombs to M-80 fireworks to sticks of dynamite, which became his explosive of choice. "All that porcelain flying through the air was quite unforgettable," Moon remembered. "I never realised dynamite was so powerful. I'd been used to penny bangers before." He quickly developed a reputation for destroying bathrooms and blowing up toilets. The destruction mesmerised him, and enhanced his public image as rock's premier hell-raiser. Tony Fletcher wrote that "no toilet in a hotel or changing room was safe" until Moon had exhausted his supply of explosives."

A hotel manager called Moon in his room and asked him to lower the volume on his cassette recorder because it made "too much noise." In response the drummer asked him up to his room, excused himself to go the bathroom, put a lit stick of dynamite in the toilet and shut the bathroom door. Upon returning, he asked the manager to stay since he wanted to explain something. After the explosion, Moon turned the recorder back on and said "That, dear boy, was noise. This is The 'Oo."

"In a limousine on the way to the airport Moon insisted they return to their hotel, saying "I forgot something." At the hotel he ran back to his room, grabbed the television and threw it out the window into the swimming pool below. He then jumped back into the limo, saying "I nearly forgot."

Moon's style of drumming was considered unique by his bandmates, although they sometimes found his unconventional playing frustrating; Entwistle noted that he tended to play faster or slower according to his mood. "He wouldn't play across his kit," he later added. "He'd play zig-zag. That's why he had two sets of tom-toms. He'd move his arms forward like a skier." Daltrey said that Moon "just instinctively put drum rolls in places that other people would never have thought of putting them."

Moon loved to sing, but he wasn't really good at it. He loved to sing at the concerts behind his drums, so they turned down his microphone. "Fiddle About" was written by Entwhistle, and Moon was the perfect fit as Uncle Ernie. I don't know why his teeth are painted black, because he could just had removed his fake tooth. Actually Moon didn't like Daltrey very much. Could had been something to do with the fact, that Daltrey punched Moon back in the 60's (and was thrown out of the band for a few weeks) or because Daltrey never really participated in partying like Moon the Loon.

KEITH MOON - DO ME GOOD

Two Sides of the Moon is the debut and only solo album from Moon. Rather than using the album as a chance to showcase his drumming skill, Keith Moon sang lead vocals on all tracks, and played drums only on three of the tracks ("Crazy like a Fox", "The Kids Are Alright" and "Move Over Ms. L"), although he played percussion on "Don't Worry Baby". The album features contributions from Ringo Starr, Harry Nilsson, David Bowie, Joe Walsh of The Eagles, Jim Keltner, Bobby Keys, Klaus Voorman, John Sebastian, Flo & Eddie (Mark Volman and Howard Kaylan of The Turtles), Spencer Davis, Dick Dale, Suzi Quatro's sister Patti Quatro and future actor Miguel Ferrer.This song is not from the original album, but appear as a bonus-trck on the reissue of the album released in 1997.

THE WHO (KEITH MOON) - BELL BOY

Besides the main lead vocal by frontman Roger Daltrey, the song features vocals by drummer Keith Moon (most of whose relatively few vocals for the band dated from the '60s). Moon mostly talks (or sings) his lines in a cartoonish voice with an exaggerated Cockney accent; however the bridge and the last line are sung in his natural voice. The shouts of "Bell Boy" are the lines of Jimmy from the disgusted realization of what the Ace Face actually was, symbolic of the theme of disillusionment throughout the album.

THE WHO - BARBARA ANN

Moon was a major fan of The Beach Boys, and Entwhistle said, that if he had been offered the job as the drummer for The Beach Boys even in the mid-seventies, he would had taken it. This clip is from the exellent movie "The Kids Are Allright".

I always laugh, when I see this clip of Moon accepting some reward for The Beatles. He must have been so funny being around for his drinking-buddies Ringo Starr, Harry Nielsson and at times Alice Cooper, John Lennon, Larry Hagman and others. But he was not easy living with, because if he dressed up at home (and he did that a lot) like Hitler or someone like that, he lived himself too much in to the role, for it to be funny at all for his wife Kim, who got beaten up quite a bit, and eventually left him. But reading the book, it's clear, that he kind of was like this most of his life. It wasn't the drinking and/or the drugs, that made him "insane". Even as a kid, he loved doing a lot of crazy pranks on people. And off course he smashed up all the Hotel-rooms for real. My memory is lousy, and so is my english, so read the book, if you're remotely interested in "true" stories about Moon. Actually it's not true, that he drove a car in to the pool, but that's not as funny or outrageous as the things, he DID do, according to Kim Moon, John Entwhistle and many others interviewed for the book.

As you know, I'm a Who fan.  Love this band!  Im sort of watching in reverse what you posted. The Beatles acceptance speech is brilliant and hilarious...  And what is Alice Cooper doing at the end of it?  Some sort of signal I guess...

Barbara Ann, again, hilarious!  Moons vocal styling at the beginning had Daltrey looking at him funny.  But then he breaks into his falsetto and his sense of humor is on stage.  Though I must admit, I did love hearing the Beach Boys rocked up a bit!

Uncle - I own Tommy, but I honestly don't think I've ever listened to it all the way through.  This really doesn't sound much like a song at all.  Can't say that I care for it.  Moon does appear to be a lunatic (in a good way).  I'd have to give the song a thumbs down but I'd go thumbs sideways on the video.

Do Me Good - Never heard this one.  I didn't even know that Keith Moon made a solo album.  I see you mentioned Harry Nilsson, and this song sounds like something he would do.  I actually like it.  It's kind of perky, and sometimes perky is cool.  And the video is a really cool snapshot of Moon bouncing around a studio.  I've got to give a double thumbs up on this one.

Bell Boy - And this is the very reason that Daltrey was the lead singer and Moon was not.  This is a pretty cool song and Daltrey sounds terrific.  I think I even hear a couple of bass flourishes that Entwhistle was famous for.  As far as the video goes, way cool footage from THE WHO!  Double thumbs up.

Barbara Ann - This is absolutely the best thing you've posted so far, even since the reinvention of the forum.  I love stuff like this.  It amazes me how easy they pull that off, all while laughing their asses off.  It's such a candid video. And they sound pretty dang good.  Best video so far.

This was great Niels.  Glad you are posting these again.  It's a shame what happened to Moon.  He had such a great style of drumming and must have been a hoot to hang around.  I wouldn't mind putting in a request if you are open to it...Hendrix.  I've always wanted to hear more drumming by Mitch Mitchell, just never have done it.

Hendrix was on my mind at some point, and now he's back again

Regarding Tommy, this is off course the movie-version. The (1969-) album-version is much better, and sung by the writer himself, John Entwhistle. I agree, that most songs from the movie (with a big exception of Pinball Wizard sung by Elton John) are throwaways, especially because of Ann-Margaret and Oliver Reed not being able to sing (and Moon off course). "Tommy"-the album is my favorite Who-album, so do yourself a big favor, and check it out, more than once.

I would never require Ann Margaret to sing.  She was one beautiful lady.