The self-titled debut album from Resurrection Kings comes with quite the musical pedigree with the band's lineup. You've got former Dio members Craig Goldy on guitar and Vinny Appice on drums, Sean McNabb (Quiet Riot amongst a list of credits) and Chas West (Bonham, Red Dragon Cartel and more) on vocals.

So when going into listening to this album, there's obviously a large collected pool of talent from which to draw on for material.

For the most part, this expectation pays off with some solid rock and roll numbers like "Path of Love" and "Who Did You Run To". Those songs are foundational tracks to build upon.

The band gets things off to a flying start with the energetic rocker "Distant Prayer". They show the ability to write songs with a catchy flair with this opening cut as well as the song "Wash Away". That latter number starts off fast, slows down a bit to sound like it is headed into ballad territory before picking up. It also features a really good solo.

Unfortunately, after they open things with "Distant Prayer", they have the song "Livin' Out Loud". This song was the first song the band put out prior to the release of the album and to my ears at least the song fell completely flat. Initially, I had no intention of buying the album after hearing the song and being dissatisfied with what I was hearing. The power ballad "Never Say Goodbye" and mid-range track "Fallin' For You" also came off as filler tracks.

While my thoughts on 11 tracks on offer with this CD are of an up and down nature, I do have to say that the band really found themselves in a "zone" with the track "Don't Have To Fight No More". The song is a kick you in the teeth rocker that shows off the best qualities of each of the band members (the guitar solo is phenomenal) and makes the listener long for more like this from the band.

While there is far too much in the way of music I found to be mediocre, there is also a bunch of songs that only serve to further whet the appetite for more Resurrection Kings music. 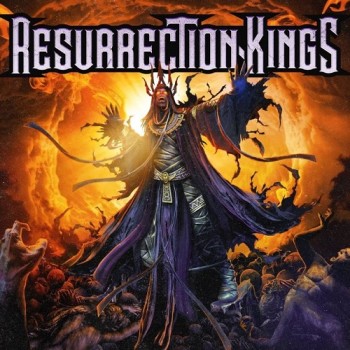 The samples I heard on Smash or Trash posts didn't work for me either, so this fell off my radar, but this review is encouraging as I am a fan of Goldys.  His work on the Guiffria debut and with Dio is very solid and has carried my interest in him to this day.  Maybe this album is an indicator of future improvement?  Though I wont be purchasing this one, I will be interested in what comes next for this band...

This one never appeared on my radar, and that's probably a good thing, based on the review.  I'm satisfied with a "no purchase" here.

Scott and Jeff, thanks for the feedback!

I wish I could get more of the reviews done that I have backlogged though.