I've given up the ghost of finding the time to get a bunch of leftover CDs from 2016 reviewed for an article.

I will say that I ended up loving the Blues of Desperation release from Joe Bonamassa and the Boneyard Dog album Bluesbound Train. Both albums are filled with amazing songs with some virtuoso guitar work and well worth your time.

But before finally closing the door on 2016 reviews, I have on last disc that I had finished reviewing a while back and was waiting to post.

So here it is now.

After seeing Rival Sons in concert as they opened for Black Sabbath during the summer of 2016, I was pretty much blown away by the intensity of the band's hard edge mix of rock, soul and blues.
The funny thing is that besides hearing a couple of songs online, I'd never really paid much attention to the band. I decided to turn that fact around a bit and picked up Hollow Bones, their most recent release.

I found that while there is a bit of a hit and miss quality to some of the tracks on the disc, this was a surprisingly effective recording.

The band opens with the stomp rock of "Hollow Bones Pt. 1" which is guaranteed to get your pulse racing. I loved the song "Tied Up" when the band played it live and the studio version, while having a slightly different feel to it versus a live setting, is still a remarkable turn for the band.

While "Thundering Voices" moves to a furiously rocking pace, I was rather underwhelmed by the track for the most part. "Baby Boy" also conjured up the same kind of "EHHH" feeling from me.

But the band got things back on track for a minute with the in your face rocker "Pretty Face", before taking a step back with "Fade Out", a track who's vocal delivery in the main lyrical passages made me wonder if someone other than Jay Buchanan was singing. I just did not take to it at all.

Thankfully, the last three tracks on the album crushed it. The band's intense cover of the Ike and Tina Turner track "Black Coffee" is amazing and "Hollow Bones Pt. 2" keeps the electrically charged tempo moving right along with its aggressive take no prisoners style. The drums pound you senseless and the riffage in the song is outstanding.

I am normally not a fan of an album closing out with a softer type of song, but the almost tender performance that fuels "All That I Want" undercuts that little bias of mine. The spare musical score that accompanies singer Jay Buchanan's heartfelt vocal performance helps meld this particular track into something quite special.

I know that the band gets a lot of Zeppelin clone flack, but I tend to ignore that and take them for what they are on their own merits. Hollow Bones might not get the band to the rarified status of Led Zeppelin but it is a vibrant rocking album despite what I thought were three critical mis-steps in the track listing. When it comes down to it, they put out a solid slab of rock and roll and further confirmed that my newfound fandom for the band is time well spent. 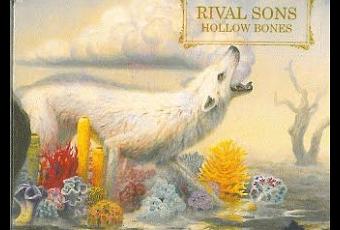 Good review TR.  I liked this release a lot.  Haven't listened to it in a minute, so I need to spin it.