After nearly 30 years of being stuck in limbo, the "lost" solo album from .38 Special singer Don Barnes sees the light of day. While the album has leaked out over the years, this release gives the album a chance to shine even more brightly.

The album contains both the "rock mix" version of the album and a second disc with not only an alternate mix of the album but three solo tracks in demo form that never made the cut for the original album.

And the talent assembled for the recording is amazing. Besides Barnes handling vocals and guitar on the album, Toto bassist Mike Porcaro appears on all ten tracks of the regular album while his brother, Toto drummer Jeff Porcaro is on 6 tracks. Both have passed on now, but their playing on this album is a nice reminder of their skill. Former Heart drummer Denny Carmassi handles drums on the other four tracks. Now a mega-producer, Giant's Dann Huff adds some guitar on three tracks.

The rock mix of the album was produced by Martin Briley who co-wrote 9 of the 10 original tracks as well as played keys on a few tracks. (Giant's Alan Pasqua and also Jesse Harms make keyboard appearances as well).

But all that assembled talent doesn't mean much if you don't have the material to make it worthy of that talent. So the question is, does this album stand up to the advance billing of being a "lost AOR masterpiece"?

There is an undeniable late 80's sound to the album, but that should not be taken as a negative. The music sounds fresh and vibrant, not dated. While there are some similarities to the work Barnes does with .38 Special, the album's rock mix edition does exactly that...it rocks...at times quite hard!
Some of the material is straight up rocking with a very aggressive take on the performance while others have more of a clearly defined commercial angle to it but both styles of song work wonderfully and blend together well.

The album opens with the title track and there's a heavier sound than you might be expecting. I've really enjoyed .38 Special over the years and of course the vocals provided by Barnes is a big part of that. But on the Ride The Storm album, the singer goes all out at times to show off a harder side to his vocal performance.

"Looking For You" alternates between a hard rock song and a strong sense of keyboard driven melody. The chorus is outstanding and the prominent keyboard sound in the chorus kicks things up a bit. It is almost impossible not to have your heartbeat racing with this one. You can pretty much say the same thing about "I Fall Back", a track that again combines a very aggressive up tempo pace with that sense of the melodic that gives a very radio friendly sound to the song.

Things slow down a bit on "Don't Look Down", giving a bit more of a dramatic feel to the song. Epic sounding choruses complete with a huge vocal sound abound on the album and this one is no exception.

Whether from Barnes himself or the various guest appearances, the guitar work on the album is phenomenal and the way it is presented throughout the disc makes you appreciate what you are hearing all that much more.

I do have to say that I wasn't all that crazy about "Maybe You'll Believe Me Now", but I think that was because of the song's chorus which sounds a bit muddied. I just found it knocked me out of the song and made it a chore to get through.

Rebounding quickly, "I'd Do It All Over Again" has a strong commercial appeal. This would've been a huge top 40 rock track. The guitar gives an edginess to the song but with the pure pop sounding chorus, you can just imagine a huge concert singalong from the audience. This is a killer track! The same could be said for "Every Time We Say Goodbye" which is a musical adrenaline burst that just explodes out of your speakers from the start!

The cover of Chicago's "Feelin Stronger Every Day" turned out nicely. It sounds just different enough, that I had to look the song up just to make sure it was the same song, despite seeing in the liner notes that Peter Cetera (along with James Pankow) co-wrote the song. The energy level is amazing and the use of a choir on the backing vocals at the end remains a tried and true way to make a song feel like it has even more depth to it.

I appreciated the rocking nature of "After The Way", but I just couldn't really get into the song as a whole. It just felt like something was missing for me to really enjoy it fully.

The album's closing track, "Johnny Ain't So Cool" moves at a fast clip but the vocals are a bit more subdued than the rest of the album. And oddly enough, they felt more pronounced on the alternate version of the song on Disc 2.

It should be noted that most of the music on these three tracks are the result of programming handled by Martin Briley. Don Barnes sings and plays guitar of course, but other than Briley playing bass and keys on "Let's Talk About Love", everything else comes out of the programming.

The first track, "Through The Eyes Of Love", feels like it is set on cruise control. It finds a groove quickly and other than the guitar solo, doesn't really deviate. The vocals are a bit soft peddled as well. It's a decent enough song but I would've loved to hear a finished version.

"Looking For Juliet" is a love song that I swear musically reminds me of Steve Winwood's "Back In The High Life Again". Obviously the lyrics are totally different, but as I was listening I just kept hearing Winwood's voice and found myself singing the lyrics for that song instead. For that reason this song was extremely disappointing to me.

As for the previously mentioned "Let's Talk About Love", the song is fast moving and shall we say, peppy. Of the three demos, this is the one that comes the closest to sounding like a finished track that should've made the cut had Ride The Storm been released when it was initially recorded.

Now, the alternate takes of the original ten tracks do downplay the harder edges of the
"rock mix". It feels like it was deliberately aimed towards being more of a full on pop rock album at times. However, I found that these versions had just as much appeal for me. I definitely prefered the "rock mix" CD but both versions of the album sound great and have a lot going for them.

Once lost but now "found", everyone gets to see just what Don Barnes can do on his own outside of his work with .38 Special. Ride The Storm is a great album that offers a whole boatload of entertainment. It is well worth the nearly three decade wait and a fantastic representation of the best that the AOR genre has to offer! 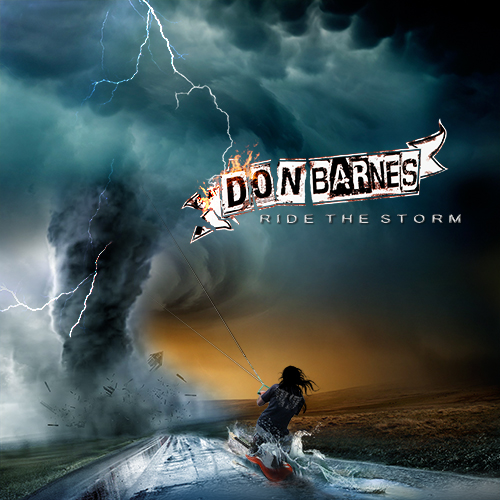 I saw this a while back and thought seriously about picking it up, but ultimately decided against it.  I really like that second song you posted.  It's great to hear that voice again for sure.  Good review dude!

I knew I was going to pick the album up as soon as I saw the announcement on Melodicrock.com, but it took me a while to get around to reviewing it. It was worth the wait, that's for sure.