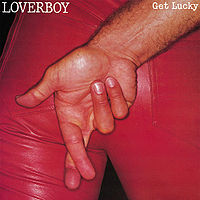 Welcome to Classic Rock Bottom's Album of the Week feature.  This week's spotlight is on Get Lucky.  Get Lucky, released in 1981, is Loverboy's
second studio release.  It was a pretty big seller and had two singles
that I remember hearing on the radio quite often back in those days.
Those two singles were Working For The Weekend and When It's Over.  But
for me, what really makes this album, is the rest of the album.

Jump is the third track.  I like it.  That's followed by the first of what I
consider to be hidden gems.  Gangs In The Street is somewhat heavy
(even with the synthesizers), and I think this is a great song.
Emotional is a change up with someone else singing.  I
believe that's Paul Dean.  Not a bad voice, but not as good as Mike
Reno.  This song has a driving, honkytonk sounding piano and some nice
guitar work by Dean.  Lucky Ones sees Reno back on the lead vocals.  I
say this is another hidden gem.  I also think It's Your Life is a hidden
gem.  It just has an infectious sound to me and I love to sing along
with this song.  More nice playing by Dean, sort of a call and response
with Reno's vocals.  I think Watch Out is decent, but this album ends on
an exceptionally strong note for me with Take Me To The Top.  This is
probably my favorite Loverboy song.  I dig the synthesizer intro.  This
is a strong, emotional vocal performance by Reno.  And Dean's guitar
work is phenomenal.  Great song.

Overall, as you can tell, I really like this album.  One asterisk means it's a good song, two means it's a fantastic song.  Although it's fairly heavily driven by
synthesizers, they don't cover up the outstanding guitar
work at all.  This album was released during a time when you could hear
great rock music on the local radio station.  Basically, rock and pop
went pretty well together.  To bad those days are gone.  The only
drawback for me is the album art.  I could do without the dude's butt
and the tight leather pants.  I guess it's out of print now, but you can
pick it up used on Amazon Marketplace for $1.28 plus shipping.  Not
bad.

For any new folks, I'll post a music player with the complete album in the first reply.  Also, if available, I'll post a couple of videos from songs featured on the album.  Please feel free to offer your
comments.  I love to see what other people think.

Permalink Reply by scottdawg on February 14, 2011 at 8:02pm
Probably my favorite album of all time, by my favorite group.   This is the monster one for them and their best.  How many fridays get started with the cowbell on Working for the Weekend.  Lucky ones, Jump, Take me to the top, all great.  When its over is one of my all time favorite songs.  Great band that takes me back to my youth, where i had good friends and good times.  If i had only 5 albums i could have, this would be one of them.  I never get tired of listening to it and i wore the tape out years ago!!  Thanks goodness for CDs and Ipods..

I'm gonna say the other 4 albums would be:

Kiss - Music From "The Elder"

Permalink Reply by scottdawg on February 14, 2011 at 8:30pm
Well... The Elder, sorry music from the elder, is one of the greatest statements of music there is and what can you say about Animalize... It  defines the 80s as one of its greatest works...Is that what you were looking for??!!  Hey, who wants to be lonely????

Permalink Reply by Scott on February 15, 2011 at 9:25am
Not sure how we all missed this one!  Definitely a great and classic release!  The 25th Anniversary edition is pretty solid too, thats the one I re-bought sometime back...

Permalink Reply by Jon on February 15, 2011 at 5:13pm
That is odd...maybe nobody responded because everyone has it? I dunno...weird. Back then it was a guilty pleasure because a) it was Loverboy and b) that album cover.

Permalink Reply by scottdawg on February 15, 2011 at 7:20pm
This was the first concert i went to in 1983 and the laser show was incredible.  I have always liked their music.  Dont know if anybody got their last album, Just getting Started,released in 07.  Shows they still got the stuff.  Great guitar work there...  They will always be a great band in my eyes...  ( been listening to alot of Stevie Nicks and Fleetwood Mac lately, must be mellowing in my old age)

Permalink Reply by scottdawg on February 15, 2011 at 8:12pm
Yea, i heard.  I was looking on you tube the other day and found the US festival 1983, with truimph and a few other bands and she played.  I dont care what anybody says, she was awesome.  I have never heard the song outside the rain, but that is going on my ipod next...hope you are doing well man!!  SHe and Rod Stewart are going on a short tour, but Julie and I are gonna wait till Fleetwood Mac goes back out and we are gonna go...

Permalink Reply by Scott on February 16, 2011 at 6:36pm
I have Just Getting Started, like it alot an d have included a track or two on an old old SHT list, may have been in the old CRR site though, I need go check, hmmmm.  I also own and enjoy VI although it had a couple of odd tracks on it...