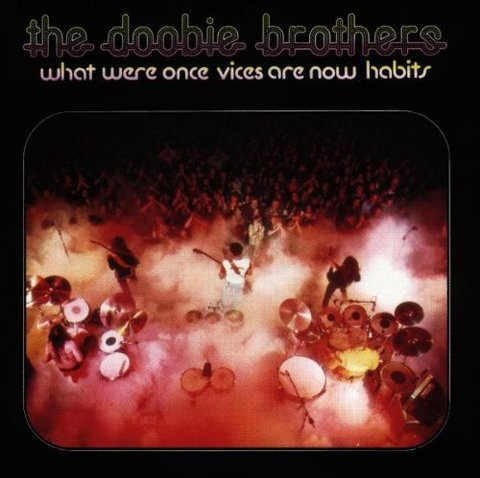 Album: What Once Were Vices Are Now Habits

I have more vinyl for you this week.  It has that vinyl quirkiness, so be ready for some snap, crackle and pop.  This week it's What Once Were Vices Are Now Habits by The Doobie Brothers.  This is in honor of the album's 40th anniversary.  Here are your tidbits:

This is a very good album.  It features some terrific guitar work, folk leanings, funk leanings (You Just Can't Stop It) and plenty of horns.  This is probably one I need to pick up in a remastered format.  Hope you enjoy.

1. Song To See You Through

8. Tell Me What You Want (And I'll Give You What You Need)

9. Down In The Track

10. Another Park, Another Sunday

11. Daughters Of The Sea

Nice pick...  If everyone listens to this they get an entry in the May Challenge for Dead members...  sadly of course.

These guys write the best rhythm geetar parts in Classic Rock, and they play some of the best acoustic geetar as well.  Just turn up Sprit and see what I mean!!

No filler!  Love Another Park, Another Sunday.

I love the Doobies pre-MM, heck I love them post-MM.  This was a great post!!  Bordering on brilliant!

This is a fine album with plenty of fine geetar™. I actually first heard this album all the way thru a couple yers ago when I bought one of those Original Album Series sets with 5 Doobie albums. This is the Doobies I like, when MM took over, they became soft-rock wussies. Now, I'm not a DB genius, but when you compare the two "Best Of" discs, volume one is classic, volume two is just horrendous.

The cover is kind of misleading, when I first saw it I thought it was a live album. Ha-ha, I was wrong. HAHAHAHAHAHAHAHA.

Other than the skipping on the first song, this was a fine listen.