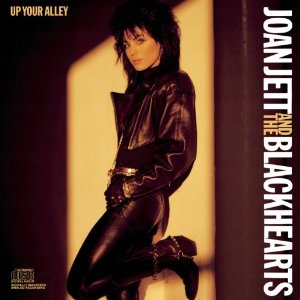 Artist: Joan Jett And The Blackhearts

Album: Up Your Alley

Singles: I Hate Myself For Loving You/Little Liar

Song Of The Week: Little Liar

So let's rock it up a bit this week.  Joan Jett And The Blackhearts "Up Your Alley" comes from 1986.  It's the band's sixth studio album and while reaching number 19 on the Billboard chart, it also managed to sell at the platinum level.  It charted a number 8 single (I Hate Myself For Loving You) and a number 19 single (Little Liar).  As for a bit of trivia, Mick Taylor of The Rolling Stones played the guitar solo on the opening track.

I certainly remember I Hate Myself For Loving You, but for the life of me I do not remember ever hearing Little Liar.  As for the rest of the album, it's really much better than I would have thought.  There are really only 2 weak tracks (Desire and Back It Up).  Everything else is really good.  You've got two covers.  Tulane is a Chuck Berry cover, and you can tell it even if you've never heard it before.  I'm sure you are familiar with I Wanna Be Your Dog.  I picked Little Liar as the Song Of The Week, and though it was quite a hit, it's a hidden gem for me.  But check out Just Like In The Movies.  It's a cool hidden gem.

No problems finding this one.  Just look in your local Walmart 5 dollar bin.  That's where I got mine.

1. I Hate Myself For Loving You

6. I Still Dream About You

***all facts taken from Wikipedia

I have this, and only listened to it on a Road Trip last year. The opening song is great, the rest, I don't really remember much of it. I Wanna Be Your Dog, that song is pretty stupid?

Joan Jett is OK, I don't like the Runaways movie. Wish I never watched it. Oh well. :) She does have some good songs, and this CD has one of them.

First thing that pops out when I listen are the songs Im famialir with, but next thing is the produciton quality.  This album sounds really nicely produced, the highs are crisp and the lows can be heard and felt, which is cool!

I like about half of this, really liked "You Want In, I Want Out" and "Desire"...

Defintely worth the listen!  However, Im not convinced that I would spend 5 bucks on this, its a nice listen, but I cant see me putting this in some kind of regular rotation...  Maybe I need to try and listen again...

If you're in the mood for Joan Jett, it's a good Joan Jett album.

For me, this has been the best post during ladies month so far. Still need to listen to Jon's post of this week. That's next. But while this is decent, not purchase material for me.

And by the way...does the chorus section of "I Still Dream About You" remind anyone else of the "I Love Rock n Roll" chorus? But this disc is ok for me. Not a bad listen at all.

Listened today and really liked this. Solid comeback after "Album", "Glorious Results..." whcih I did not like at all, so stopped buying anything new from JJ until "Pure And Simple".

"Tulane" was the only dud for me, REALLY liked "Ridin' With James Dean". Gonna have to search this down.