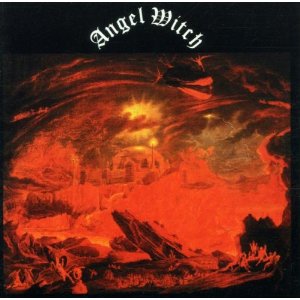 After last week's horrible album, I figured I should right the ship and post something good. You know, so you can clear your mind and ears of that.....THING from last week.

This week we go way back to 1980 and the self-titled debut album from Angel Witch. Yes, it's more metal and yes, it's more from the NWOBHM. Metallica likes these guys too!

However, after this album, Angel Witch broke up and a different formation came out with their second album 5 years later. Back then, waiting that long between albums (unless you were Boston), especially a debut album, was the kiss of death. With so many other metal bands sprouting up, Angel Witch became just another "should, coulda" bands. Didn't help that the second album and subsequent albums weren't as good as the debut. Permalink Reply by Scott on December 8, 2012 at 9:34pm
Bit of trivia... What song was playing during the dream sequence pictured above?

There was a song playing?

Yes, took me thousands of screenings to realize it - and we've discussed it on here before...

Now I feel the need to watch it.

I prefer my women a little older, and with bigger boobs. She looks like a 15 year old. I thought, you guys were normal.

When she was a minor.

Just about two weeks ago, I picked up this version of the album from Ebay. I had this one in the past from the local used music store, Greywhale. To get it back from ebay I had to pay $43 (including shipping) LOL, when I paid probably 8 for it years, years, and years ago.