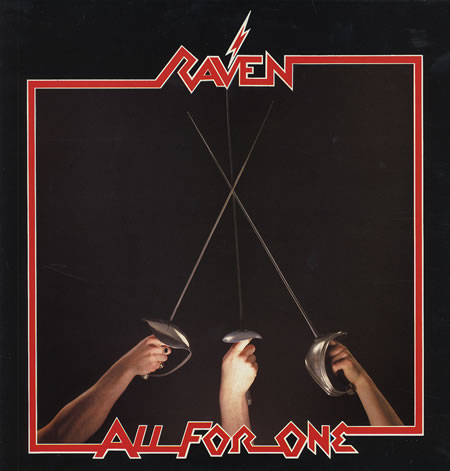 I was debating what to post for this week's look back at '83 pick and actually had something all set to go. Then it dawned on me that we're at the halfway point of our look back at '83 series and why not post what I strongly believe is one of the best (if not the best) metal album from '83.

Hell, I've brought up this album before and even posted one of the CD bonus tracks awhile back which is probably the greatest cover song EVER. Go ahead and dispute that fact knowing with absolute certainty that you are 100% wrong.

I was in Texas when this album came out and I was talking to some guy (a friend?) and we were talking about music and he said I needed to pick up something from Al di Meola because he was an amazing geetarist as well as this album here since it was awesome. Young, impressionable child that I was, I heeded his words and picked up "Scenario" from Mr. di Meola as well as this opus on cassette.

I loved the di Meola album. The guy (again, a friend?) was right when he said di Meola was an amazing geetarist, plus I think he mentioned that he was the worlds fastest geetarist? Dunno, I could look, but don't wanna.

As for this album here? I thought it was just noise. Listened to it once and filed it away. My young ears weren't ready for the onslaught I guess.

Awhile later I decided to give this album another chance and I was blown away. You see, my ears had matured. They were now ready. Hell, it wasn't noise! It was HEAVY METAL. What really surprised me is that there is quite a bit of melody on these songs which I hadn't noticed before.

I was then (and still am) a Raven fan. At one point I had their first two albums (this is the third) and even though they are fine albums, I'm still drawn to this one.It's raw, it's heavy, it's my style.

Of course you have a band release an opus and what does their now major record label do for the followup? Why, have them go commercial! And then wonder why fans don't buy the album! Yeah!

Sad this since they lost a lot of fans. There have been some good albums since their "sellout" period but I guess some fans still have that bitter taste in their mouth. Other than the first twoi albums, I have a majority of their output and I'm damn proud of that. Hell, I was and maybe still am a member of the Raven Lunatics community. Another thing I could look up but am too lazy. Or maybe I'm really not a true fan??????

When I first had access to the internet through a friend (yes, it was) one of the first albums I searched for was this one. It cost a pretty penny since it was a Japanese import, but I was salivating as i waited for the mailman to deliver it. When I popped it into the CD player and cranked it, I loved it just as much then as I did over 15 years earlier.

For you old folks out there: THIS AIN'T NOISE!!!!

And this is the last sentence.

Availability: OOP and the asking price starts at around $200.00!

You just gotta love the picture of the drummer on the back cover: 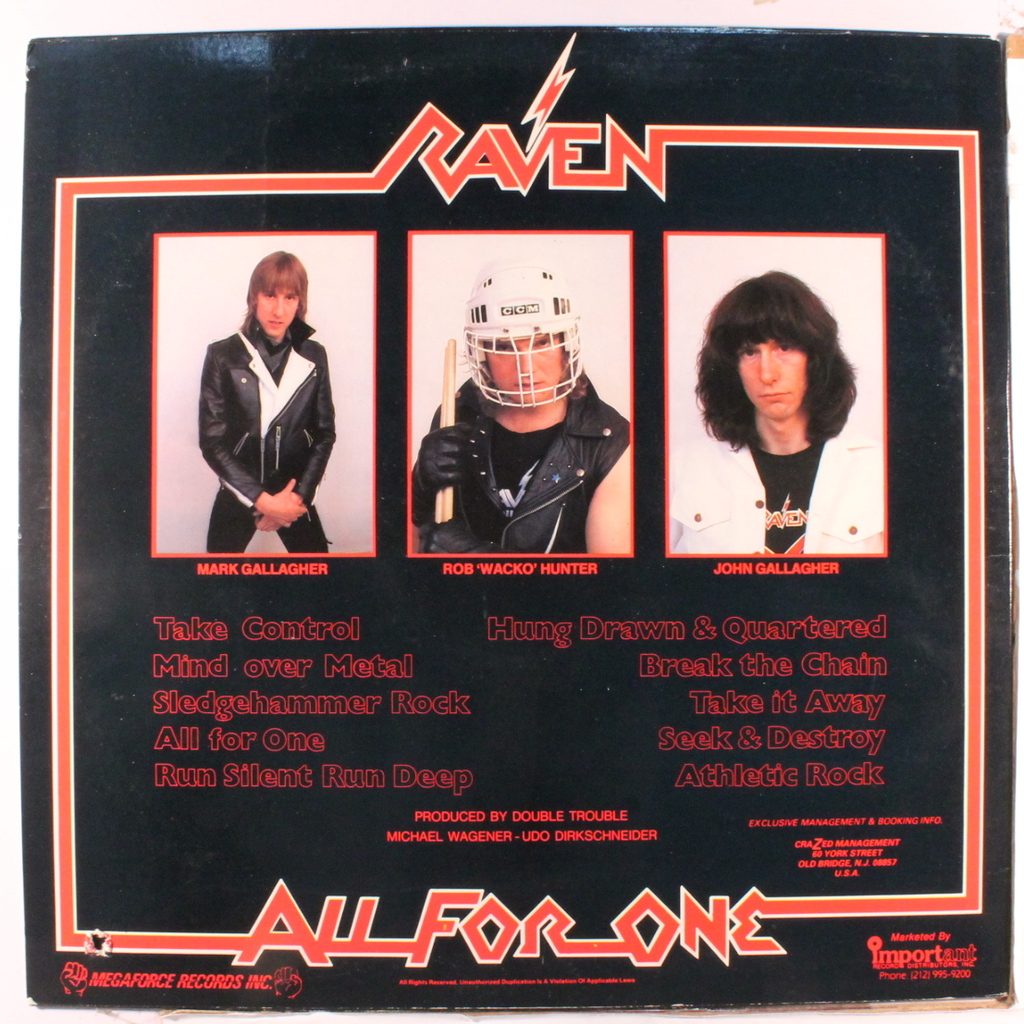 I think I remember now, that you have posted this album before, but I can't remember, if I heard it then.

I bought this album back in '83. It was my third Raven-album since '81. My favorite will always be their debut-album, because it sounded fresh. After that, they repeated themselves, until around '85, when it got wrong.

Listening to this album is great. It's actually 3 times better, than I remember. My favorite on this album was always "Break The Chain", but now I'm not so sure. This is almost as good as the debut-album, but not as original, off curse. I can understand if some people don't like his screaming, but it's a part of the Raven-sound. Raven-guitars are sounding good, though. Weren't they named Gallagher, those two brothers in the band? I mean, just like (fu.....!) Oasis.

This was a great listening, Jon. If you still have their two first albums, please post them for your good ol' danish pal, eh?

Sadly, I don't have their first two albums any longer, they have been lost over the course of time.

The Pack Is Back

Plus a couple comps:

Mind Over Metal (has tracks from the first three albums)

Basically I have almost everything BUT those first two albums. That sucks since the price for those two is a bit too much at this time.

Heard of 'em, but never heard 'em...  So now I have.  Vocally I hear, Udo, Mustaine, Halford, so far so good.  I do like the geetar work and the riffage is pretty good too.  So why isn't this just knocking me off my feet?

I did like the geetar work, its quite good, some of the drum fills felt out of place and the album would have benefited from a more prominent drum presence in the overall mix - they sound distant at times.  This was a first time for me, so maybe, like Jon, I need to come back later and try again...

What's with the memory, Scott?:

I downloaded those 5 songs from "Rock Until You Drop" from ITunes, but it was from a "Greatest Hits"-album. I couldn't get the whole album.

Regarding my own comments from back then: I stand corrected. This album is good, so I wish, I could listen to "Wiped Out" (their second album) as well, because I remember it to be very fast, but not as good as the first one, but I don't think I've heard it since '82-'83.

My Therapist just worked me through that ...  Thanks for bringing it back up Niels!

I had this album in the past, I don't know.

I still have and like the following Raven CDs.

The Pack Is Back
Stay Hard
Life's A Bitch
Nothing Exceeds Like Excess (wish it had the lyrics in it though).

I too am a fan of Raven. Have been since I was a kid in the 80's. I have about a dozen of their albums, including the '82 EP Crash Bang Wallop (which might actually make this their 4th album). I don't really agree with them selling out. I really liked the Stay Hard album. I think once a band gets to a certain point in their career, they begin to tighten up and refine their sound and also experiment too.

I'm not sure I would label this as the best metal album of '83 but it certainly is a great one all the same.

Ummm...will have to disagree about the sellout especially with "The Pack Is Back".

I'm with Scott on this one.  I just can't really get into it.  It's not totally without merit.

Accept had a song with the same title on their last album, but not the same song.