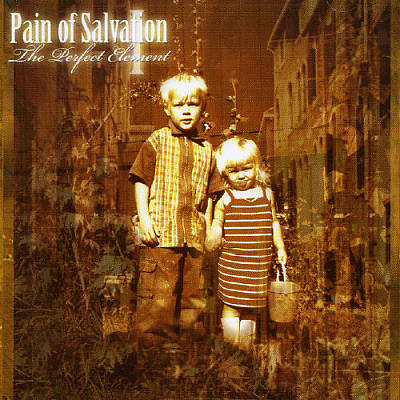 For this week's anniversary pick, which marks album #250 in this ongoing series of lost/forgotten albums, we bring you Pain Of Salvation's "The Perfect Element I", released in 2000. So, it's its 15th year anniversary.

This week's pick was going to be a different Pain Of Salvation album, but it's so fantastically weird and different from their earlier albums, I decided to give you a kind of introduction to the band with something that wasn't as weird as the original pick. Something a bit more "mainstream", if you will.

The first song on this album is very close to nü-metal, which might turn some people off. However, there are also hints of prog-rock in that song which is what you'll get with the rest of the album. There are hints of Opeth, Marillion, Faith No More and Dream Theater throughout the album, but melded into something fresh.

A brief history of the band, courtesy of allmusic.com:
"In 1984, Daniel Gildenlow formed the band Reality at the whopping age of 11. The group stayed together under that name for seven years, albeit not without personnel changes. In 1991, the name Reality was shelved for the new reality of the name Pain of Salvation. By this point, the lineup was the aforementioned Gildenlow, Johan Hallgren, Johan Langell, and Kristoffer Gildenlow. When Fredrik Hermansson joined in 1996, they realized that they were ready to record an album. The result, Entropia, was laid down in 1997. They followed that disc up within a year with One Hour by the Concrete Lake. 2001 saw the group releasing The Perfect Element I, and a follow-up came fast with the release of the concept album Remedy Lane the following year. Daniel Gildenlow remains the only original member, and has been joined by bassist Gustaf Heim, guitarist Ragnar Solberg, drummer Leo Margarit, keyboardist Daniel Karlsson."

A review, courtesy of allmusic.com:
"Sweden's Pain of Salvation represents a consortium of progressive/metal rockers who seemingly enjoy the "concept album" format. This 2000 release, titled The Perfect Element I, signifies the band's follow-up to its 1999 effort One Hour By the Concrete Lake. Here, the group effectively melds relatively strong compositions with pertinent injections of technical proficiency and shrewdly crafted rhythmic developments. However, in most instances, the musicians infuse raucous heavy metal type licks with '70s-style progressive rock, as they perhaps intimate the best of both idioms via resplendent imagery, driving beats, and crunching guitars along with a penchant for fabricating memorable melodies. Lead vocalist/guitarist Daniel Gildenlow often toggles his wares between gruff, dark intonations and harmonious or infectious lyricism. Hence, the singer's dual approach instills a bit of a paradox, as the overall demeanor of this band seemingly fluctuates on a moment's notice. However, The Perfect Element I is a reasonably stylish effort -- one that should extend the musicians' current fan base."

For those wondering, there hasn't been a Part II yet.

Availability: A used copy runs around $8. There is a two disc version with the second disc featuring three more songs and an "enhanced element".

I've seen this name thrown around before in articles or on websites.  Always wanted to hear what POS sounded like, so here is my chance.

That first track definitely has that nu-metal sound.  Scott should love this.  At least there is a bit of melody in the chorus. The solo is good.  In The Flesh has a very cool guitar sound at the beginning.  This song really reminds me of Queensryche. I think this one is much better.

Okay, enough of the play by play.  I listened at work, and here are a couple of observations:

Idroglossia is mostly a mess.

The guitar work overall is quite nice.

I hear the influence of nu-metal, Queensryche, Faith No More and maybe some of Dream Theater.

My favorite moments on the album are the ones that sound like Queensryche.

My least favorite moments are the nu-metal moments and the spoken vocals or lyrics.

So, overall it's not a terrible listening experience, but you did quench my thirst to hear this band.  I don't feel like I need to explore them any further.  So thanks for that.

I've been picking around this the last few days with all sorts of thoughts about what I'm hearing.  Nu-Metal is not something I can get into, at this point I think the "acquired taste" approach is well in the past so that's out, its just not for me.  But what about the parts of this that aren't Nu-Metal?  In The Flesh is uneven, it has moments of interesting, melodic goodness, and then they fall off and the vocals feel flat all over the place.  Is it just me?  Ashes is a droner and my first enjoyable track is actually Morning On Earth but only by a bit as it had droning tendencies as well.  But Idioglossia loses me again.  Yes there's some nice geetar work and yes there are moments but great musicianship does not always mean great song structure.  And so the pattern has been established and the music plays on repeating this pattern.  Its a mess really.  Not for me at all....

I do find it amusing that Tage wrote a review that was unfavorable and the leader dude calls him out for it!  Really?  Take a step back a listen to what you've put out?  Who is your target audience for this?  I cant figure it out...  But hey, on the bright side, its not Russ Ballard!!